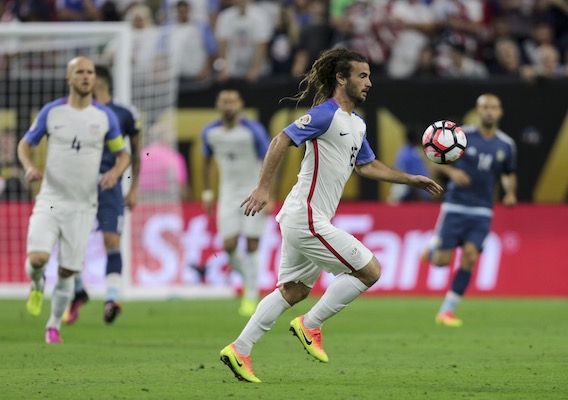 THERE IS NO SHAME in losing to Argentina. No coach, no lineup, and no formation is going to give the U.S. men's national team a good chance to win a game like this.

But even taking all of that into account, Tuesday's 4-0 loss was bad.

Argentina has won all five of its games so far at Copa America Centenario but the United States proved to be the Albicelestes' easiest opponent. Argentina had an easier time against Panama, which it defeated 5-0. At no point did the Americans appear to bother Argentina in the slightest—not even with brute strength.

Here are my thoughts on the game

This game was lost the moment U.S. Soccer announced the starting lineup. Kyle Beckerman has had some very nice moments for the U.S. in the past but age has caught up to him. Chris Wondolowski has not shown up in big games for quite some time and Graham Zusi had been on his way out of the team until Klinsmann brought him back in March.

The Yanks made some really nice strides in 2016. Darlington Nagbe has played well whenever given a chance and his 32/32 passing, combined with a game-winning goal in a pre-tournament win over Ecuador, showcased that. Christian Pulisic is young but fearless. Even Matt Besler showed well against Ecuador, proving he could fill in at left back and maybe give Klinsmann a reason to push Fabian Johnson to his preferred position in attacking midfield

Instead of being bold, however, Klinsmann reverted back to his conventional—and now aging—options. The Argentina match was a wasted opportunity to try something new and see what the team is all about. Many of the U.S. team’s elements tonight were exposed badly in 2015 at the Gold Cup and the CONCACAF Cup but Klinsmann seemed to want to bring the team back to that dark year as opposed to building something new.

After preaching boldness to his players, Klinsmann chose not to follow his own advice.

If the Americans had lost while putting up a fight, like the did against Germany in the quarterfinals of the 2002 World Cup, that would have been OK with pretty much everyone.

But now American supporters have to wonder if Klinsmann is seriously considering the Wondolowskis and Beckermans and Zusis as candidates for the 2018 World Cup.

Before the tournament, Klinsmann said that his goal was to make the Copa America Centenario semifinals. That was a bold and lofty goal and the team accomplished that feat. Nothing can take that away.

But the legacy of this tournament will be that humiliating loss to Argentina. The Yanks took the field and rolled over from the opening kickoff. It showed too much respect and not enough confidence.

Combined with its 2-0 loss to Colombia, the Americans still appear to be intimidated by top teams. Meanwhile, Paraguay and Costa Rica showed that squads with talent limitations can compete with the likes of Colombia.

So while the U.S. earned positive headlines for the first time in years, the nature of the semifinal loss (not the loss itself) will ensuer that key questions linger.

Bad games are to be expected for some of the U.S players but for Michael Bradley the Argentina contest was particularly ugly. He simply had too many turnovers in the midfield, and he tried to do too much. It's true that many of his top combination targets were missing from this lineup but he is too good to make costly turnovers in the middle of the field.

He is still the captain of the team and very important to its success. There are simply not any American central midfielders close to pushing him out of his starting position anytime soon. But his outing was subpar against Argentina, and he played down to the level of some of his teammates instead of elevating them.

He will have to find a way to bounce back from a so-so tournament and a very poor semifinal.

Those are Brian's thoughts on the match. Now share yours in the Comments section below.