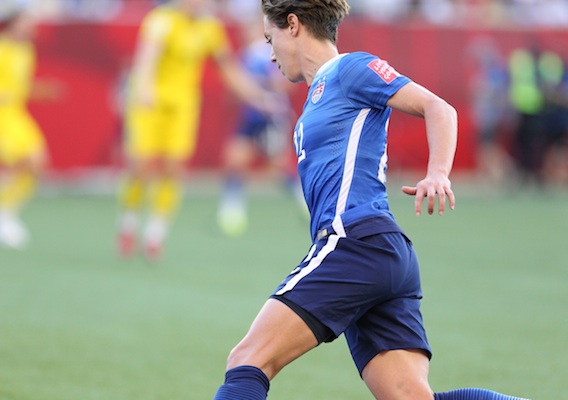 Neither Sweden nor the United States managed much of an attack in Friday's scoreless draw in Winnipeg. U.S. defenders Julie Johnston, Meghan Klingenberg, and Becky Sauerbrunn had a lot to do with that.
BY Blake Thomsen Posted
June 13, 2015
8:00 AM

Hope Solo: The U.S. backline restricted Sweden to minimal efforts on goal, and thus much of Solo’s action came on crosses and set pieces. It wasn’t her best night in this regard, and she was nearly caught out in the second half before Meghan Klingenberg’s match-saving goal line clearance. Rating: 5.5

Ali Krieger: Krieger rebounded nicely after a shaky opening game. She was much stronger in possession and in defense, though she will know she could have done better late in the first half when Christen Press slid a dangerous through ball into her path on the right side of the box. That one loose touch aside, this was a strong night. Rating: 6.5

Julie Johnston: Johnston was absolutely immense on the evening for the Americans, comfortably the best player on the field for either team. Her calmness and quality on the ball belies her age (and makes her look like a central midfielder at times), and her defense was superb throughout the game. Her brilliantly timed slide tackle late in the second half to cut out a Swedish attack was the perfect embodiment of her performance. Rating: 8.5

Becky Sauerbrunn: Sauerbrunn wasn’t quite at Johnston’s level against Sweden, but it was another solid showing from the U.S.’s consistent left center back. Her presence alongside Johnston should give U.S. fans confidence in this team’s ability to get results even if the attack continues to sputter. Rating: 7

Meghan Klingenberg: Like her fellow fullback Krieger, Klingenberg also rebounded with a much better showing against Sweden than Australia. She looked more comfortable on the ball, and her stunning header off the underside of the crossbar and ultimately away from the net saved the Americans from a damaging defeat. Rating: 7.5

Carli Lloyd: Unfortunately we have to stop talking about the defenders at this point... Lloyd played a decent match (especially on the defensive side of the ball), but she should have done better with a late header off a Megan Rapinoe corner kick. Further, she failed to play any particularly incisive passes from her spot in the center of the U.S. midfield. Rating: 5.5

Lauren Holiday: Holiday was rather anonymous in the attack, generally maintaining possession but offering little else. Her defense was solid enough. Rating: 5.5

Morgan Brian: The U.S.’s youngest player looked jittery in the opening exchanges, but she managed to regain her composure as the game went on. Still, her deployment on the wing was questionable, as her skill set plays much better in the middle of the field. She failed to make much of an impact as a right midfielder, and, it must be said, it was surprising to see her there instead of Tobin Heath, who shined in her substitute appearance against Australia. Rating: 5

Megan Rapinoe: Aside from her standard quality delivery on set pieces, Rapinoe really didn’t have it against Sweden. She largely put the U.S. attack on her back against Australia, but she couldn’t get much going in this one. Look for her to bounce back against Nigeria. Rating: 5

Christen Press: Handed a start in her favored striker position, Press had a few bright moments against Sweden. But she failed to make a key contribution to any U.S. goal scoring chance, despite her hard work on and off the ball. Rating: 5.5

Sydney Leroux: As usual, Leroux worked exceptionally hard, but nothing really came off for her against Sweden. To be fair, nothing really came off for any U.S. attacker, but Leroux had a particularly unsuccessful evening. Is she more suited to a substitute role, where her boundless energy can be unleashed against tired defenses? This is but one of many questions that Jill Ellis needs to answer in the coming days. Rating: 5

Amy Rodriguez: A-Rod rarely saw the ball after coming on for the ineffective Brian. Rating: 5.5

Abby Wambach: Wambach was a surprise omission from the starting lineup, and she nearly scored in her substitute appearance, heading a cross into the ground only for it to take a turf-induced bounce over the crossbar. The game largely bypassed her aside from that near miss. Rating: Incomplete

Jill Ellis: The temptation is to rip Ellis for her role in the anemic U.S. attack. That temptation is valid, and perhaps should be acted upon. But at the same time, if she warrants criticism for the attacking issues, then she also deserves credit for the superb defensive showing. In the face of a slew of questions—where was Heath? how healthy is Morgan? why so many long balls?—she’ll seek to achieve better balance between defense and attack against Nigeria. Rating: 5.5

OK, these are our ratings. Now we want to see yours. It's easy with our interactive Player Ratings tool. Do it.

Blake Thomsen is a frequent ASN contributor. Follow him on Twitter and let him know what you think.