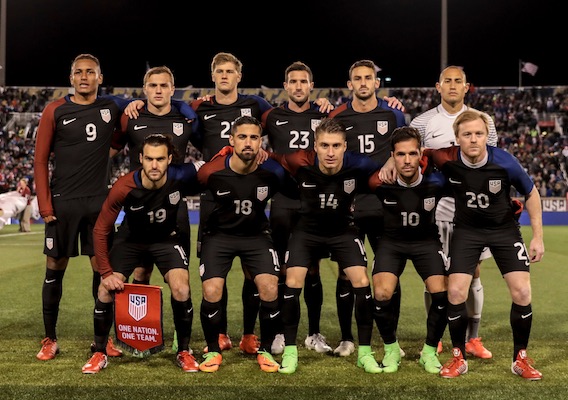 The scoreline was close but the game was not. The U.S. should have put a few more balls into the back of the net, but even without multiple goals the Americans showed good progress from the Serbia game.
BY Brian Sciaretta Posted
February 03, 2017
7:05 PM

IT WAS NOT A GREAT PERFORMANCE by any means, as finishing and creativity should have produced more goals. But there was energy, enthusiasm, and decent moments for Bruce Arena's side—and plenty of room for improvement.

Here's how the individual players fared.

Luis Robles: There was not a lot for Robles to do as the U.S. had almost all of the ball. He handled a few crosses well. Rating: 5.5

CREATE YOUR OWN U.S. PLAYER RATINGS

Graham Zusi: For the second straight game Zusi played right back. At times he looked decent but his lack of pace was exposed in the first half by Cory Burke, who gave Jamaica its best chance of the game. Overall, not bad. Rating: 5.5

Walker Zimmerman: The FC Dallas central defender enjoyed a very strong first international appearance. Jamaica did not have many opportunities but Zimmerman was there to handle them when called upon. His aerial game was impressive and he pushed into the midfield from time to time. He could enter the mix on the depth chart. Rating: 7

Steve Birnbaum: While not quite as good as Zimmerman, it still was a serviceable outing for Birnbaum who helped keep the clean sheet. Rating: 6

Jorge Villafana: The Santos Laguna left back has some very positive moments getting into the attack—particularly in the first half, when his link-up play with Sebastian Lletget was noticeably strong. Rating: 6.5

Dax McCarty: The Chicago Fire midfielder was a steady presence in the midfield. He really moved the ball well and helped the U.S. dominate possession. He was crucial to the build-up of the game's lone goal. Rating: 6.5

Chris Pontius: The Philadelphia Union midfielder got the start over Alejandro Bedoya but struggled in the final third to connect with the strikers or create dangerous opportunities. Rating: 5

Benny Feilhaber: The Sporting Kansas City playmaker created the game’s only goal and was one of the strongest players in the game before coming off for Darlington Nagbe. His energy was apparent and he clearly has a chip on his shoulder after being left out of Jurgen Klinsmann’s plans for years. Rating: 7

Sebastian Lletget: The Los Angeles Galaxy midfielder had a very strong first half. His final ball could have been better at times but his ideas were usually correct. He linked up well with his teammates and could have a future on this team moving forward. He drew a lot of fouls as well. Rating: 6.5

Juan Agudelo: The New England Revolution forward helped with his hold-up play but he should have been a dominant presence against a team as weak as Jamaica. Rating: 5.5

Jordan Morris: His showing in the first half was a bit of a disappointment as his touch let him down a few times, and many of his passes in the final third did not connect. In the second half he improved quite a bit and was rewarded with making a nice run that produced a goal. Rating: 6

David Bingham: Similar to Robles, Bingham did not have much to do aside from successfully handling crosses and distributing the ball effectively to his teammates. Rating: 5.5

Michael Bradley: It's odd to see Bradley coming off the bench for the U.S. men's national team but overall he did not leave much of an impact in the game. Rating: 5.5

Darlington Nagbe: After replacing Feilhaber, Nagbe once again played well and was one of the best players on the field. On Sunday he played on the left wing; tonight he was in the middle of the field. He is one of the best American players at holding the ball in the final third. Rating: 6.5

Brad Evans: The Seattle Sounders defender had a moment where he struggled to keep pace with Jamaica’s attackers; he made some nice passes. Rating: 5

Alejandro Bedoya: The Philadelphia Union midfielder struggled to get involved in the game. Rating: 4.5

DaMarcus Beasley: The four-time World Cup veteran did not play enough to earn a rating. No rating

Bruce Arena: Tonight's starting lineup made a lot more sense than the one Arena used last Sunday, when the team lacked speed and utilized just one forward, Jozy Altidore. Against Jamaica Arena had his players in much better positions to succeed and even though the Yanks should have produced more goals, it was a much better performance and something on which to build.

Not everything worked and the Zusi-to-right-back experiment is a case in point. Still, the biggest winners were players who failed to get attention under Klinsmann: Zimmerman, McCarty, Feilhaber, Nagbe, Villafana, and Lletget. Arena deserves a lot of credit for giving chances to players who might actually make a difference in World Cup qualifying. Rating: 6

Those are Brian's ratings—now share yours with our patented Player Ratings tool.