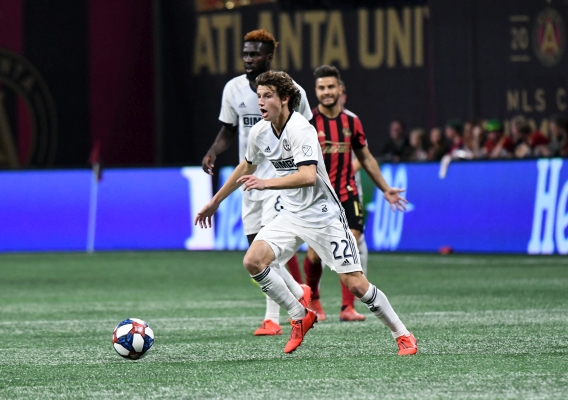 Play Your Kids: a look at the youth numbers for the 2019 MLS & USL Seasons

The 2019 MLS season was certainly visibile in how young players got on the field and contributed. Teams like FC Dallas, Real Salt Lake, and the Philadelphia Union all played multiple U.S. youth internationals. But behind the optics, there are numbers and ASN's Jordan Boddie takes a deep look at the 2019 youth minutes in MLS and USL.
BY Jordan Boddie Posted
December 03, 2019
1:00 PM
RECENTLY, the U.S. U-17 men’s national team was in Brazil for the FIFA U-17 World Cup. That team had 12,508 minutes of professional experience, five and a half times more than any US U-17 before it. It wasn’t concentrated in a handful of players either; fully two thirds of the players on the 21-player roster has played at least one professional minute, and six of 21 played at least 1000 before jetting off to Brazil. And every last one of those 12,508 career minutes came from the US domestic professional system, MLS and USL.

‘Play Your Kids’ has been a popular phrase in American soccer circles, especially since the failure to qualify for Russia just over two years ago.

But how is that movement actually faring? How good is the American system at giving young players opportunities? Now that the domestic season has concluded, it’s time to follow up on the Play Your Kids Midterm Report.

When Major League Soccer created the Homegrown Player Rule in 2008, it allowed teams to sign players directly from their academies instead of them having to go through allocation processes. Eleven years on, 43 domestic U-20s played 22,922 minutes in MLS this season, a 5-fold increase compared to a decade ago when nine American and Canadian teens combined to play just 4,161 Major League Soccer minutes in 2009. American U-20s in particular played 20,508 minutes this season spread out amongst 35 players, an 8-fold increase over a decade ago when seven USMNT eligible U-20s played only 2,506 minutes in America’s top flight league.

We can also pull back the curtain a little bit and look beyond MLS and into the ranks of USL. Domestic U-20s earned over 111,000 minutes in USL this season, a massive increase from the 71,860 last season. Americans in particular nearly doubled their USL minutes from 2018 to 2019, going from 49,871 to 98,269. This jump is primarily thanks to the introduction of USL League One, the new USL third division, and three new MLS reserve teams, USL Championship’s Loudoun United, and USL League One’s North Texas SC and Orlando City B. Already heading into 2020 we can expect another jump because both New England Revolution and Inter Miami have announced intentions to field teams in USL League One.

When it’s put together, American and Canadian U-20s played nearly 135,000 minutes in MLS and both USL divisions, an increase of almost 44,000 over last season. Those 134,582 minutes were also a more than 32 fold increase over the number of minutes played by domestic U-20s in 2009. Of course the MLS/USL partnership accounts for much of that growth, but even independent lower league teams have contributed to a small portion of it.

Swinging back around to look specifically at MLS, we can take a look at the individual birth years that saw the most minutes by U-20 players. With the season now complete, we can see that the 1998 class is a bit of a down year in comparison to its neighbors, similar to the 1994 and 1996 classes.

The positive outlier, the 1989 class, was Freddy Adu’s birth year, in which he alone accounted for more than 55% of the minutes earned by players born that year. As for 1994, 1996, and 1998, a multitude of factors may have played a role. It’s possible that players were simply in college during their U-20 years, as 1994-born Jordan Morris and Nick Lima were, both of whom have earned regular call ups to the national team under Berhalter.

Or maybe a birth year simply didn’t produce enough talent; the 1996 class was the spearhead of the only U.S. U-17 team to miss the World Cup. Or perhaps a birth year’s best talent didn’t ply their trade in MLS; two of 1998’s biggest stars, Christian Pulisic and Weston McKennie never played a single professional minute stateside before leaving for Germany.

American and Canadian youth players are playing more than they have in the past, but how are they faring relative to their counterparts abroad. Based on player ages at the start of the season, MLS gave 3.30% of all available minutes to domestic teenagers. Compared to leagues that really do well when it comes to playing youth, 3.30% isn’t top of the pile.

2019 was a very successful year for youth minutes, especially in America’s lower leagues. And for the youngest of pro players, their age cohorts are playing at levels MLS has never seen before, which is never a bad thing. 2002s and 2003s are leading the way to new heights that young domestic players haven’t seen before. It will be interesting to see as we head into next season as some of these players like Gianluca Busio, Daniel Leyva, and Ricardo Pepi start fighting for even more playing time.