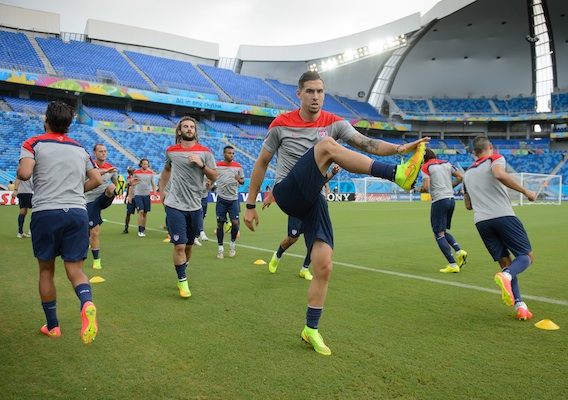 Photo Essay: Mood Is Light, Team Is Focused in Natal

We'd like to set the scene for you at Arena das Dunas in Natal, and fortunately for us John Todd is on the scene, taking great photographs one day before the biggest U.S. match in four years.
BY John Godfrey Posted
June 15, 2014
4:56 PM
ALL SIGNS POINT TO DaMarcus Beasley playing left back, the biggest question mark in the starting lineup and a spot that has plagued the United States for years.... ...while Jozy Altidore, a guaranteed starter, remains central to the team's success: If the 24-year-old striker has a good game, the Yanks have a very good chance to win.
HERE'S THE VIEW from the Arena das Dunas center stripe...

...and this is what Tim Howard's vantage point will look like tomorrow...although I don't anticipate an extra goal cage will be placed just outside the 18-yard box.

THE PLAYERS WALKED out onto the pitch looking all sorts of serious on Sunday...

....but Klinsmann lightened the mood with something he said as the players congregated in the middle of the field. (We heard a loud roar of laughter all the way up in the press tribune, so it must have been a pretty good joke.)

IN CASE YOU WERE WORRIED, Timothy Chandler is sufficiently healthy to engage in leaping exercises, although Matt Besler outjumped him...

...and this guy seems primed for big things. Do you think this will be the World Cup where Michael Bradley makes a name for himself on the international level? Share your take in the comments section.