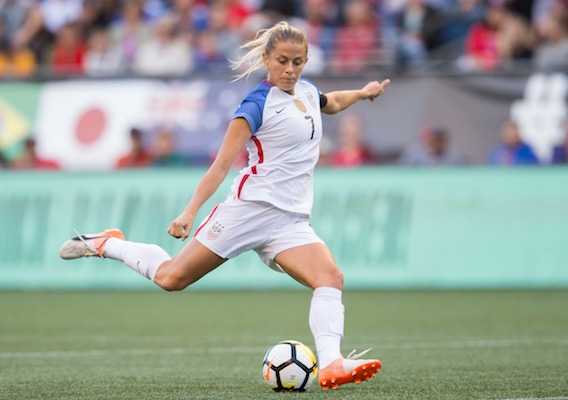 Shortly after her first callup to the U.S. women's national team, the 24-year-old California native suffered a serious injury that shelved her for six months. But she's back with the team now, and thriving.
BY John D. Halloran Posted
August 03, 2017
8:00 AM

BREAKING INTO THE United States women’s national team has never been easy. Players often wait years for their first callup, and if it comes, many don’t actually get the chance to step on the field.

So when Abby Dahlkemper received her first senior team call-up last October, and managed to earn two cameo appearances in her first camp, it was a big deal.

Then disaster struck. After earning another shot in November, the defender suffered a serious foot injury that took her away from the game for months.

With U.S. head coach Jill Ellis making an unusual foray into exploring new players that fall, Dahlkemper thought she might have missed her opportunity to break into the squad.

“It was definitely really difficult,” said the California native. “I definitely did think [I missed my chance] just because it took me so long for my injury to [heal]. It took six months for me to feel like I can get back on my feet, literally, and get back to where I was."

The Americans were holding their camp in San Jose at the time, only 30 minutes from where Dahlkemper grew up in Menlo Park. It turned out to be, as she described it, “a blessing in disguise,” as she went home to her parents’ house to start the recovery process.

Dahlkemper pointed out that the time off helped her “appreciate the game” more and helped her feel “refreshed and ready to go.” In the spring, she returned to club play and, once again fully fit, returned to the U.S. squad in June. There, she earned two more caps in friendly wins on the road against Sweden and Norway. In those games, she helped lead the American backline to two shutouts.

Now, heading into the final game of the Tournament of Nations against Japan on Thursday (10pm ET, ESPN2), Dahlkemper is one of only three Americans to play all 180 minutes thus far in the competition. The 24-year-old credits Ellis with increasing her confidence and, in turn, the coach has developed more confidence in Dahlkemper.

“She showed growth in the [NWSL] and I’ve always been impressed with her passing game. And part of it is necessity. I wanted to find another center back to add depth there. I had a look at some others and [Abby] stood tall. Now, the more she’s in here, the more she’s gaining confidence. I see improvement in her from game to game in terms of reading the ball and decision-making.”

Ellis has usually partnered Dahlkemper at center back with veteran defender Becky Sauerbrunn, who has grown to appreciate the qualities of her new teammate.

“[Abby] is instinctual and when someone follows their instincts it’s very obvious to play off that person,” explained Sauerbrunn. “You can see she’s not hesitating. She steps strong and she drops strong.”

“She stepped right in [with the U.S.] and played how she was playing in the league,” Sauerbrunn added. “She’s had great form in NWSL and she’s carried that over here. To me, she looks really confident and I don’t think she’s playing any differently. I think she has a great range of passing and she’s definitely put that on display.”

Sam Mewis, who has been a teammate of Dahlkemper at UCLA, as a professional with the North Carolina Courage, and now with the national team, thinks her longtime friend is ready to become a regular for the U.S.

“It’s been so much fun for me to watch her grow and I’ve been rooting for her to get this callup,” Mewis said. “She’s been doing great, I’m really proud of her. She just works so hard. She’s one of those people who really waited for her opportunity and had faith that it would come. I’m really proud of her and happy for her and I know she’ll continue to do really well.

“I think she really had that confidence deep down that she knew she could do it. She’s one of those people who, being here isn’t enough. She wants to continue to grow and continue to develop and contribute to the team. I’m just excited to continue to see her path unfold and happy that I’ve been witness to it.”

In the Americans’ last match, against Brazil, Ellis moved Sauerbrunn into the midfield and told Dahlkemper—who only has six total caps—to lead the backline. The defender appreciated her manager’s confidence and said she's eager to play any role required.

“I’m willing to do whatever I can for the team. It’s nice because Jill has really instilled a lot of confidence in me. I’m hoping to just keep improving.”