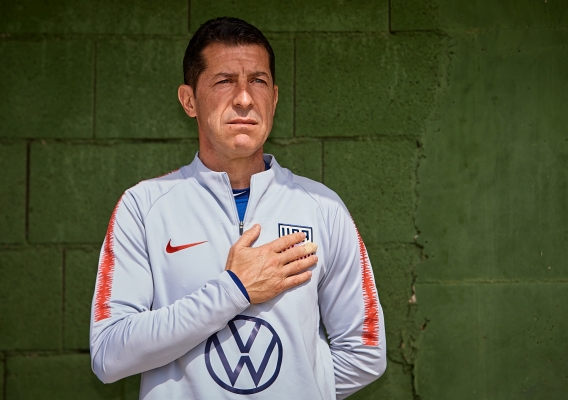 ASN's Brian Sciaretta has been covering the U-20 team for seven cycles now. With the 2019 team's World Cup run over, he gives his parting thought on what was a good cycle.
BY Brian Sciaretta Posted
June 09, 2019
10:00 AM
THE UNITED STATES U-20 team’s World Cup run ended on Saturday with a 2-1 loss in the quarterfinals to Ecuador. It is the third consecutive cycle the U-20 team has advanced to the quarterfinals and the third straight time its campaign ended there.

Since the turn of the millennium, the U.S. team has lost in the quarterfinals in 2003, 2007, 2015, 2017, and now 2019. This year’s team had a very good, albeit not great run. Unlike 2017 when it was outplayed by Venezuela in the quarterfinal. This year’s tournament was perhaps more similar to 2007 or 2015 which had great wins in the round of 16 (against Uruguay and Colombia, respectively) but were not as sharp in the following game.


One big takeaway is that 2019 is also the second straight cycle where the U.S. team brought a team without two of its best players. In 2017, Weston Mckennie was not released (as was Nick Taitague) and Christian Pulisic was with the full national team. In 2019, Josh Sargent and Tyler Adams remained with the senior national team.

But this team in large played better than the 2017 U-20 team at the World Cup. The win over France was one of the best in the history of the U.S. U-20 program. The loss against Ukraine wasn’t bad considering how disciplined and smart Ukraine plays. Qatar was only the weak part in the first four games and Ramos experimented quite a bit in that game.

Generally, the team played well throughout not just the tournament but throughout the cycle.


Back in 2017, ASN documented the “Missing Years” generation in American soccer where players born from 1990-1994 just never developed into quality first team players at a rate of previous generations. A big part of that gap was noted in the poor performances of U.S. youth national teams while those players were eligible for the U.S. U-17, U-20, and U-23 teams. That generation is highlighted by the failure to qualify for the 2012 and 2016 Olympics but the U-23 team is generally tough to put together due to release issues and, often, senior national team commitments.

Since then, the U-20 team has advanced regularly to the quarterfinals – while now missing several key players. From a broad perspective, that generally means more prospects with a higher degree more will pan out to the senior team level. It doesn't guarantee success, but the warning signs from the "missing years" are not there.

Players who didn’t make it


This U.S. U-20 team is particularly interesting because it probably was the highest skillset of players who were cut – not those like Tyler Adams or Josh Sargent who weren’t released.

The 2015 U-20 team had some impressive players cut – Lynden Gooch, Cristian Roldan, and Romain Gall are just three.

In this group, Ramos could probably have fielded an entire team of players who were either cut, injured, or missed for other reasons. Brendan Aaronson, Jonathan Amon, Frankie Amaya, Christian Cappis were all cut. Jaylin Lindsey was injured. Jesus Ferreira did not get his citizenship in time.

What was also important is that Ramos also gave call-ups to players who didn't make this World Cup team but who will be key for the 2021 cycle - like Taylor Booth and Thomas Roberts.


It’s fair to point out specific performances in this tournament as to which players helped or hurt their case within U.S. Soccer – either with the full national team or the U-23 team (which is the next logical step for many).

It’s only natural to have a stock watch for specific players, but it is also only a snapshot and things will change quickly for these players because they are still so young. Some players who had poor tournaments will improve their shortcomings. Some who had great tournaments will plateau.

Here are notes on a few specific players
Chris Richards: Was perhaps the best player on the team over the tournament. The Bayern Munich central defender was a rock in the back and looked ready for big things ahead.

Sebastian Soto: The team’s leading scorer came up with some critical goals and was clinical finisher. His off the ball movement was first-rate and he could be in-line for a summer move due to the dismal state of Hannover.

Tim Weah: Wasn’t consistently dangerous but the talent was there to make magic. He just needs regular playing time.

Sergino Dest: One bad defensive game but clearly has skill on the ball. If his defense improves, he could be great. He has things to work on but he has the talent.

Paxton Pomykal: He wasn’t great against Ecuador but was generally very good in every other game. He looks like he could be ready to take a big role with the U.S. U-23 team. He has very important defensive elements to his game.

Chris Gloster: Gloster had some very important moments moving forward but he was typically very steady defensively and was unrattled in 1v1 situations when a winger was isolated against him. He looks beyond the U-19 level in Germany and, like Soto, he could force a move away from Hannover.

Chris Durkin: It was a disappointing tournament for Durkin and he will need to get himself in a situation to move beyond it. DC United has been tough for him to play regularly when the club is at full strength. Before writing too negatively about him, it’s important to note that Durkin was widely considered the best U.S. player in the March camp where it drew France and defeated Japan.

Aboubacar Keita: Another player who was not great in this tournament but could improve. He was injured since March and came into this tournament rusty. He also has only played three professional games in his career – with USL League One’s Richmond Kickers. With regular professional minutes, he could do well.

Konrad de la Fuente: He was one of the younger players on the team and is eligible for next cycle as well. The final product wasn't there in this tournament but the talent is there. Will his coaches get him to take the next steps?

Justin Rennicks: Saw limited minutes and missed over a month following his hamstring injury in March with the U-20 camp. He is a feisty and energetic forward who moves well. Now he needs to get himself on the field with New England.


It’s never easy to evaluate a coach right after a loss but Tab Ramos did well, once again. He was actually handcuffed a lot with his final roster given how many player were carrying injuries in recent weeks heading into the World Cup. Brady Scott, Mark McKenzie, Justin Rennicks, Aboubacar Keita, Julian Araujo all lacked consistent playing time heading into the tournament due to injuries. On top of that, Timothy Weah, Ulysses Llanez, and Alex Mendez weren’t playing regularly for their clubs for a variety of reasons.

But Ramos was still able to get a lot out of this group. And while his tactics didn’t always work out, he was able to get his team to play with a lot of heart right until the end. That has been a hallmark of his teams dating back to his very first cycle and it makes his teams quite popular with fans.

If this is Ramos’ last U-20 cycle, he’s been a tremendous asset and has helped prepare a lot of players for the next level.