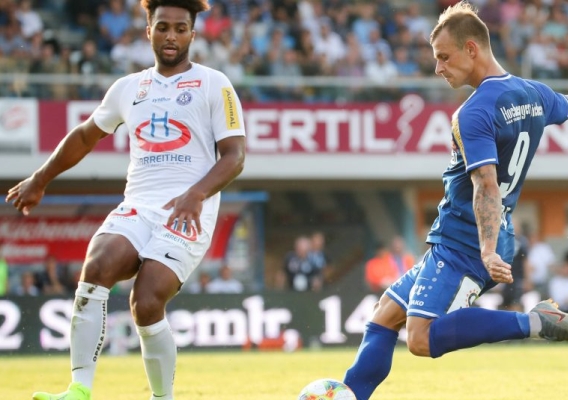 A former stalwart with the U.S. U-20 team and now signed to one of the biggest clubs in the world, Erik Palmer-Brown has been moving from team to team and league to league in recent years. ASN's Brian Sciaretta caught up with the Kansas City native to discuss life with Austria Vienna and his goal of getting into the U.S. U-23 team.
BY Brian Sciaretta Posted
December 13, 2019
9:00 AM
LIFE ISN’T ALWAYS easy for players who are part of what is called the “loan army.” This term is usually given to players who are signed to some of the world’s biggest teams but who spend years going on loan from club to club. Being one of these players means never knowing you will likely be on the move to a new club in the near future, and you never know exactly where that will be.

It’s been a challenging path for Palmer-Brown but one he believes has made him better.

“It's really difficult, actually. To be fair, in the moment, right now, obviously, it doesn't seem difficult because I'm here at the club - but once it starts to get into the summer months of finding a new club - I've never stayed at the same club. So just finding a new club, packing up everything and moving again. Then the first months of getting here, living in a hotel for a month until you can get your apartment - it's a really tough time, settling-in, getting your work visa and doing all these things. You can't play, you don't know the group. You have to get acclimated, prove yourself again. Bouncing around club to club, it's challenging. But at the same time, I find it quite rewarding.”

His connection with Manchester City, however, is not distant. He adds that the club’s approach with each of its loaned players is different. The loan managing department is hands-off with some but more hands on with others (as Palmer-Brown points out: “They leave being a professional up to you. They ask you what you want.”

For Palmer-Brown, he is in touch with Manchester City on a weekly basis to recap his games and performances. Then about once a month, he gets a visit from someone at the club.

“Joleon Lescott is my coach and it's pretty awesome experience talking to him to pick his brain,” Palmer-Brown said. “He sees situations as a defender so differently. When we're back here in January before the start of the season’s second half, he is going to come out and do a little bit of coaching here....Someone from the loans is probably out here once a month just to visit and see your games or training.”

But there is no way around that being part of a loan army is frequently met with ups and downs. But Palmer-Brown currently finds himself in one of the “up” periods. He has safely broken into Austria Vienna’s starting lineup and the club, while the club is off the pace from last year where it qualified for the Europa League, is a far improved situation from his previous club in Holland with NAC Breda which was relegated out of the Eredivisie in ugly fashion.

Austria Vienna is currently on the upswing after an ugly start and is aiming to close a seven point gap to move into the top half of the standings – which would send it into the “Championship round” of the playoffs. But the team is playing better and it hasn’t lost in four games. It also recently came off a 5-0 win over Hartberg – the team it is chasing to move into the Bundesliga’s top half. The improved play from the team has also coincided with Palmer-Brown’s increased playing time and a formational switch of having a five-man backline with two wingbacks.

But Palmer-Brown is also enjoying the city of Vienna off the field and this has helped his mindset of moving from team to team.

“It is for me the best city I played in,” Palmer-Brown said. “Best city I've lived in, obviously, besides Kanas City. I love Kansas City. But I mean, this city - it's unbelievable. It's a big city. It's beautiful. The architecture is unbelievable. You got everything you could want in a city like this.”

On the field, Palmer-Brown has seen a lot for a player of his age. At just 22, he has played professional games in six leagues: USL, MLS, Portugal’s Segunda, the Belgian Pro League, the Eredivisie, and the Austrian Bundesliga.

He enjoys the Austrian Bundesliga and points out that its small league with just 12 teams and there is a lot of familiarity among the teams. But he also points out that the league has changed and a lot of teams influenced by the current leaders, Red Bull Salzburg, who are coached by American Jesse Marsch.

“That's the thing about moving around from league to league,” Palmer Brown explained. “I've been in four different leagues now overseas in Europe, including Portugal second division. It's just you get see a lot of different types of style play, a lot of different players. In the Netherlands it's a lot of trying to build out of the back. Here, there is a lot of parity in the league, and I think there is a lot of parity in a lot of leagues where most teams could beat the top teams. Obviously, Salzburg has been at a different level this past year - credit to Jesse Marsch.

“I am excited to watch them play and press teams like Jesse Marsch is known to do,” he added. “A lot of teams actually try to take that Red Bull style of pressing off the ball. And once they lose the ball, get the ball back and recover it in their attacking half a go again and score. A lot of Austrian teams here have tried to build their model off of what Salzburg done because they've had so much success.”

Palmer-Brown is one many young Americans playing throughout the European leagues. What is interesting about the current group is the camaraderie that exists between the group. Via texting, snapchatting, or calling, Palmer-Brown connects with Christian Pulisic, Nick Taitague, Josh Sargent, and Tyler Adams on a weekly basis.

Together these players support each other through the ups and downs that come with playing in foreign country and in a sport where American players have historically not been held in high regard. But that is something that they are also trying to change, together.

“Knowing the guys that I played with, it's just about it's about winning and just wanting America to be looked at as a real footballing nation,” Palmer-Brown said. “And for us to be taken to be taken seriously across the world. When you come overseas, you've got to prove yourself again. I think we want to get to a point where American players are regarded highly all across the World.”

Palmer-Brown is ambitious right now on many levels and one important goal for him is to get his way into the U.S. U-23 picture with Olympic qualifying approaching. As a member of the U.S. U-20 World Cup teams in 2015 and 2017 (the latter of which he was the captain and both teams advanced to the quarterfinal), Palmer-Brown has not yet emerged as part of the team’s plans and competition remains tough with Cameron Carter-Vickers, Miles Robinson, Mark McKenzie, Auston Trusty, Justen Glad, and Chris Richards all earning the recent call-ups in central defense.

But with success in Austria, Palmer-Brown is looking to change that.

“Living over here, playing in Austria as an American, I always wear that as a badge of pride. That's who I am. I love my country. I grew up in the youth system, the youth national team. It hasn't been easy to be away from the U-23's but it's a driving force for me to get back in there and be a part of that group. Not being with them - that's part of football. You also got to wear that as well. I think that's a good thing about football and for U.S. soccer right now is that there's a lot of players capable of filling in each other's shoes and the competition's getting bigger and bigger.”