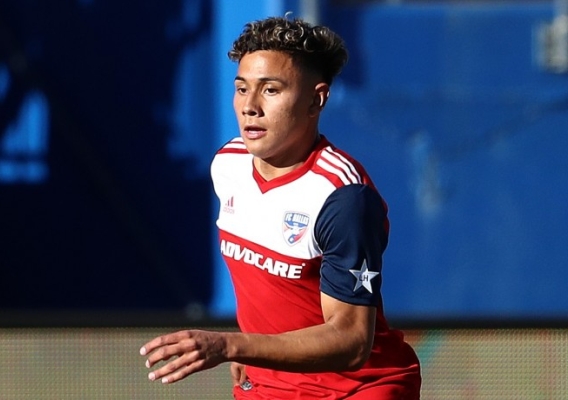 Once overlooked, Cerrillo breaking out for Dallas & aiming for U-20 spot

In his past, Edwin Cerrillo has not been considered a top American youth prospect. But the teenager from Waco has seized a starter role at FC Dallas and has shown a lot of potential. Now he hopes to be a late inclusion into the United States U-20 World Cup team.
BY Brian Sciaretta Posted
April 24, 2019
5:00 PM
THE CURRENT YOUTH movement in MLS this season is welcome news as players eligible for the various United States youth national teams are getting first team minute in unprecedented levels. Many of these players like Paxton Pomykal, Gianluca Busio, and Chris Durkin have long been predicted for success as they have been regarded as some of the best young Americans in the game.

The story of Edwin Cerrillo, however, is one of the most surprising stories of the young players who are emerging this season. The Waco native signed a homegrown contract with FC Dallas in February and has quickly 3become the team’s starting defensive midfielder. He is one of three teenagers in the team’s regular starting lineup (along with 20 year old right back Reggie Cannon) and has been a major contributor to a strong start to the season which has Dallas now in fourth place in the Western Conference.

“It's a bit surprising, to be honest,” Cerrillo told ASN. “When I was about to sign, I thought I was going to start out with our second team for a while. Everything has come so quickly.”

Cerrillo, 18, admits that he underestimated the physicality of the league at first but that he has gotten used to it quickly and has improved with every passing game. Dallas has now won four out of five with Cerrillo in the starting lineup and the most recent achievement was a 2-1 on the road against defending champions Atlanta.

But the road to the FC Dallas first team was not always smooth for Cerrillo. He was not always considered a major prospect along the lines of his FC Dallas teammates Paxton Pomykal and Jesus Ferreira. Cerrillo had plenty of setbacks and it took sacrifices from both himself and his family to find and seize opportunities.

“Before I tried out for the FC Dallas academy, I actually tried out for the Dallas Texans academy and didn't make it.” Cerrillo recalled. “My cousin got in touch with one of the coaches here at Dallas and he got me a day at practice here where the coaches could see me. We drove up here two hours for that. After the training, Jesse Suarez, the coach of the U-15 team, told me he wanted to see me at a week-long tryout.”

“We actually had a planned vacation to Florida which was the same week as the tryouts,” Cerrillo continued. “It was our first planned trip as a family but I told my family I didn't want to go anymore. I wanted to try out for FC Dallas. They looked at me like I was crazy. My mom told me to go on the trip and that I could try out next year. My dad was like: 'if you really want to do this, just do it. Try your hardest and we'll see you when we get back.' But I decided this is what I really wanted. Thankfully, that tryout turned out to be life changing.”

Cerrillo’s tryout was successful and he moved away from his home in 2015 to join the FC Dallas academy (It was a big sacrifice I had to make and not just for me, but for my parents as well. It was a big step I had to take,” he recalls on moving away). From there he progressed steadily from the U-15 level. Before he signed his homegrown deal, he scored 12 goals in 71 Development Academy games.

But fighting through the setbacks and moving away from home at a young age has also translated to the way he is as a player.

“Every now and then I remember the teams I didn't make or the coaches that didn't like me or why I didn't get called into camps,” Cerrillo explained. “But with every game, I try to go out and prove people wrong but at the same time, play for the people who did support me - like my family back home. But I do also play with a chip on my shoulder. The family moment we had at the signing was just an amazing moment. It's these things are why I am so grateful to FC Dallas and it's another reason why I play the way I play. I try to give it all for the team just like they gave it all for me.”

FC Dallas head coach Luchi Gonzalez knows Cerrillo well from his former role as the club’s academy director and was especially pleased to have him be the first homegrown player signed under his tenure as head coach.

“Edwin is a special signing because Edwin is not a player that was always called into the national team,” Gonzalez said. “He wasn't always a starter but his mentality was always to grow and learn and compete and fight - fight for a roster spot, fight to get better. To me, he's a great story for our academy and all of our academy players and youth players. I am really proud of him to now be at this level.”

But the month ahead might also become an interesting time for Cerrillo on another level. The U-20 World Cup is fast approaching and he is eligible for selection. With every passing week, his name is mentioned in the media as a possible candidate to make the United States team for the prestigious tournament that will be held in Poland.

Just as Cerrillo was overlooked at the club level, he has also never had his foot in the door internationally. He has not only never played with the U.S. U-20 team this cycle, his only times getting called up were at the U-17 level at the IMG Academy to train with the players who remained in Florida when the top U-17 players traveled for a tournament.

But Cerrillo is in the mix to make the U-20 World Cup team with his strong play at Dallas and is ready to help the Stars and Stripes in Poland should he get the call.

“Coming into this season, I knew I was eligible but my main focus was on getting minutes here” Cerrillo said. “Now that I see my name as being mentioned as in the mix, I think if I do go it would be a goal for my career. One of my goals this year was to get called up into the national team. To be part of that team, would be a privilege.”

A lot has been made in recent years about dual nationality allegiances among young Mexican-American players. Many of these players have played for the United States but the defection of Jonathan Gonzalez set off a debate among American fans as to what could be done to win the allegiance of these players.

Cerrillo understands both sides. He grew up in a household that was loyal to the Mexican national team but appreciates the opportunities the United States has given him. If he is called up to the U-20 World Cup team by head coach Tab Ramos, he is ready to give everything he has.

“Growing up with my parents supporting Mexico, I felt the same way. I supported them even when they were playing the U.S.” Cerrillo said. “I always looked up to the Mexican national team players because they were such big stars. Like I tell my parents, if I get this opportunity, it’s my country I am going to defend it with everything I have. I am going to try my hardest because it's the country that is going to give me the opportunity. Regardless if my parents are Mexican, I am going to prove that it is my country and I want to represent it at the highest level I can.”