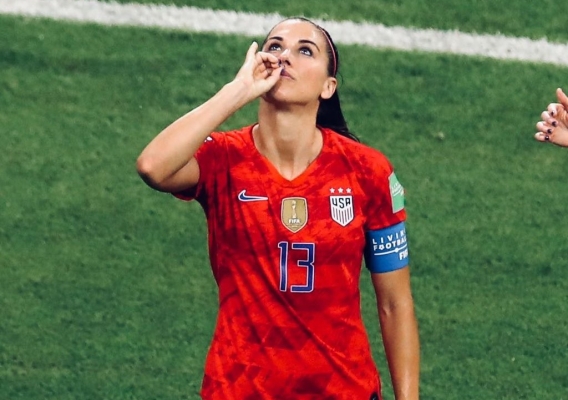 On to the Finals! USWNT sneak past England in epic 2-1 win in Lyon

In a hard-fought game that featured nail-biting action, drama, and impressive individual plays, the USWNT advanced to the World Cup final with an epic 2-1 win over England. ASN's John Halloran was in Lyon for the game
BY John Halloran Posted
July 02, 2019
1:00 PM
LYON, FRANCE - The United States women’s national team has advanced to its third straight World Cup final after defeating England in the semifinals 2-1 in front of 53,512 fans at Parc Olympique Lyonnais.

After having scored in every match this tournament by the 12th minute of play, the Americans once again got off to a quick start against England. In just the fourth minute, Rose Lavelle nutmegged an English defender on the endline, worked a pocket of space for herself inside and fired on goal. Goalkeeper Carly Telford saved the effort which popped back out to Christen Press, but the American winger couldn’t manage to get off a shot on the follow-up.

Then in the 10th minute, the Americans got on the board. Tobin Heath took the ball from her own half and dribbled forward. She saw Kelley O’Hara overlapping on the flank and played the defender into space down the line. O’Hara then floated a service to the backpost which Press headed in to give the U.S. the early lead.

No Rapinoe, no problem! The USWNT takes the early lead again and has now scored in the first 15 minutes in every single game this #FIFAWWC pic.twitter.com/Xqu3u0m56V

However, the English struck back only nine minutes later. Beth Mead worked enough space against O’Hara to get in a service from the Americans’ right side. The ball went into the always dangerous area between the backline and the goalkeeper and Ellen White ghosted between U.S center backs Abby Dahlkemper and Becky Sauerbrunn to get a touch on the service and redirect it into the U.S.’ net to tie the game.

The Americans earned the next good chance of the game when Rose Lavelle latched onto a ball near the top of the box in the 27th minute and fired a laser on goal. Telford, once again, proved up to the task and managed to push the ball away.

Only a minute later, England almost took the lead themselves. Keira Walsh fired a ball from 40 yards out into the U.S. box and Becky Sauerbrunn tried to clear it. However, her attempt went backwards and nearly into the American net—skirting just wide.

In the 31st minute, the U.S. created yet another chance, and this time made it count. Dahlkemper found Press out wide on the left flank and the winger fed Horan the ball. The midfielder turned and lofted a service into the six which Morgan headed home to give the Americans the lead again.

England battled back, and nearly again found a quick response. Two minutes after the U.S. goal, Walsh—this time lining up a shot from 30 yards out—forced Naeher into a diving save on the far post as she went into a full stretch to just parry the ball away from danger.

After a raucous 45 minutes, the half ended with the Americans on top 2-1.


Alex Morgan scores her first goal since the opening game and retakes the lead in the Golden Boot race (6 goals, 3 assists)

She's the first player in #FIFAWWC history to score on her birthday ???? pic.twitter.com/EGWBNIyaxI

Five minutes into the second stanza, Crystal Dunn committed a foul on Nikita Parris which gave the English a set piece in a dangerous area near the corner of the box. The ensuing service resulted in a scramble, but England couldn’t get a clean look at the ball and Naeher eventually latched onto the loose ball.

In the 60th minute, Press had another chance to add to her goal total when an errant pass out of the back from Telford went right to the American. Press, however, went wide with her chance.

The U.S. made their first sub in the 65th minute with Mewis entering for Lavelle. After a strong defensive effort, Lavelle went down near the sideline and the switch appeared to be injury-related.

Only two minutes after the change, England seemed to equalize yet again. A quick flick from Jill Scott put White in between the two American center backs—again—and the English attacker put her chance away for the brace…until a VAR decision ruled her offside.

Shortly after England’s disallowed goal, Ellis once again dropped the U.S. into a five-back—a decision she employed in the team’s quarterfinal win over France—as she tried to ride out the last 20 minutes with the 2-1 lead.

In the 79th minute, the English nearly tied the match again when O’Hara got caught stepping and Demi Stokes got in behind. Her centering pass found White in the middle all alone, again, but Sauerbrunn caught the England forward on her backswing and she missed the ball and went to ground. Several minutes later, the play was called back for a VAR review and a penalty was awarded—which Naeher saved.

Six minutes later, England went down a player when Ellie Bright earned her second yellow card and was sent off.

The game played out with the Americans killing off the last few minutes and earning the win. The U.S. next plays on Sunday at 11 a.m ET.