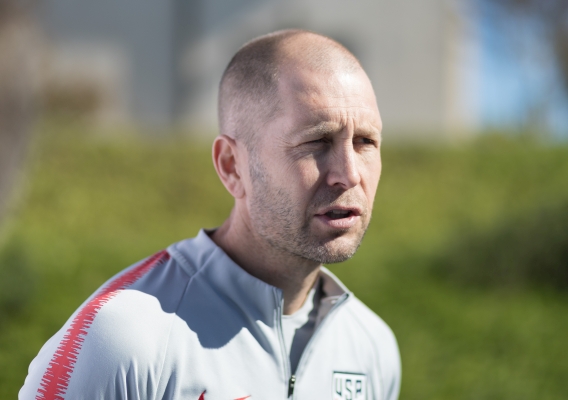 On opening day, Berhalter details his vision for January camp in California

Gregg Berhalter had a lot of interesting things to say about January camp on its opening day in Chula Vista. ASN's Brian Sciaretta breaks down what the coach said.
BY Brian Sciaretta Posted
January 08, 2019
12:00 AM
The First Day of the Gregg Berhalter-era of the U.S. national team is in the books and the new manager spoke to the media after training in Chula Vista on Monday. While no conclusions can be drawn after a single day, the New Jersey native was eager to talk about his vision.

“One of the main objectives of this camp is team building,” Berhalter said. “It's an intense period but it's a focused period. I think we're really going to get quality time together as a team.”

The venue is not new to Berhalter as it was also the site where the U.S. team trained in one of its final times in the United States before heading to Europe for the 1998 World Cup. While that venture was not successful 21 years ago, Berhalter is aiming to kick off something positive in Southern California.

Berhalter’s first point of emphasis in addressing the media was team culture, something that was important for U.S. national team general manager Earnie Stewart during his time serving in similar capacities for four Dutch clubs.

In Chula Vista, Berhalter said things were planned to enhance players getting to know each other – including mixed up room assignments with up to four players bunking in some rooms..

“One of the main objectives of this camp is team building,” Berhalter said. “It's an intense period but it's a focused period. I think we're really going to get quality time together as a team…I think the most important thing we can focus on right now is building the group, cohesion, and style of play.”

“This is what we live for,” he added. “I told the guys when we first got on the field: listen, no more talk, now we actually get to do it. That's the fun part - is getting on the field.”

As for how the first session went, Berhalter was pleased given that it was the first formal session of training most of the players have had in several months. While he was expecting effort and excitement to be there, the execution was beyond what he was expecting.

“Thinking about how the guys have had extended periods off, I was really impressed,” Berhalter explained. “I was impressed with the execution, I wasn't expecting that much based on the fact they were off for awhile. The mindset was good, the effort was excellent, but the execution was pretty good.”

What was particularly most interesting in what Berhalter discussed following training was how players were going to be evaluated and how he plans to use data analytics to help organize his team.

With regards to analytics, Berhalter is a supporter of how advanced the technology is in the sport in that it goes well beyond measuring basic concepts like speed, endurance, and heatmaps. But rather advanced methods can go into great detail in evaluating how players read the game – and this is something that he hopes to utilize with the team.

“It's also about more complex ideas like how to control space - like the positioning of a player off the ball to get into a dangerous goal-scoring position,” Berhalter said of the use of analytics. “You can track things like that through data and analyitics. Then you can come up with what players position themselves in dangerous positions all the time. Even if they're not scoring, you know he has the potential because he's in these positions. Things like that. It's crazy what they've been doing and we're striving to get to that level.”

Most importantly with regards to the team, Berhalter outlined how the players would be evaluated in this camp. Obviously this camp features a large number of players with a roster size of 28. This also does not include any players based abroad – which will likely make up a large percentage of the roster. So players involved in this camp will need to stand out to be included on future U.S rosters.

Berhalter noted that in camp there are frequent competitions in training and that he and his staff are paying attention to who wins and who loses. This, as he explains, is to place an emphasis on building a culture of winning.

But beyond what takes place on the field, Berhalter stresses that how the players fit into the team off the field is also a relevant factor to how players are evaluated this month.

The result, he hopes, is a clear picture of how these 28 players fit into the big picture moving forward.

“I think it was very important to tell the players how they were going to be evaluated in this camp,” Berhalter said. “It's not only going to be about what happens on the field. It's about how they fit in culturally to what we're doing. That is a big part of it….I very clearly laid out the objectives of this training camp and that was team building, team culture, style of play, and competing.”

“I know after this month we're going to have a much better understanding of who fits in and what are the key qualities of the players and how they can help us.”