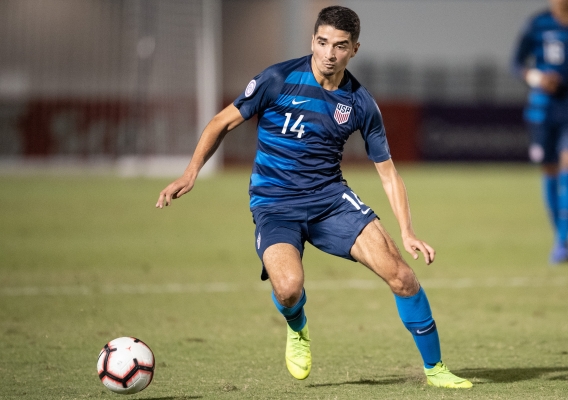 On loan from Celtic, Perez looks ahead to NCFC stint & U-20 World Cup

The internal competition will be tough for players to earn a spot on the upcoming United States U-20 World Cup team. For Manny Perez he looks forward to the challenge after inking his deal with Celtic FC that will start with a loan to North Carolina FC. ASN's Brian Sciaretta spoke with the Raleigh-are native.
BY Brian Sciaretta Posted
February 15, 2019
4:10 AM
WHEN THE United States U-20 national team celebrated on the field after winning the CONCACAF championship in November, Manny Perez was just one of three collegiate players on the team along with Frankie Amaya and Justin Rennicks.

But just as Amaya and Rennicks have turned professional since that tournament, so has Perez who left North Carolina State University and came to terms with Scottish champions Celtic FC. Instead of moving to Glasgow, however, he will begin his career on loan with his hometown club of North Carolina FC.

The deal was hardly a surprise, however, as Perez had caught the attention of Celtic over a year ago while playing for the U.S. U-18 national team.

“It was a long process,” Perez told ASN from Raleigh. “There was a lot to think about and I am thankful for the opportunity Celtic has given me - as well as my hometown club, North Carolina FC to given a chance to develop with them. But overall, I think it was the right move. It's a great move to develop young players and play young players. My goal has always been to play in Europe so it wasn't an opportunity I could pass on. Everyone in my family and coaches at States was helping push me to play with them.:

“It all started when I was with the U-18 national team,” he added. “We had a couple of camps in Spain and Portugal and Germany. Then two summers ago that is when Celtic first reached out to me. They saw me in Spain. I did really well and we just kept in communication.”

But Celtic is still a ways off for Perez as his plate is full for the next several months. Up first is the start to his first professional season where he will spend on loan with North Carolina FC – a club in that players near his hometown of Garner, N.C. The club is currently in the second tier but has a stated goal of becoming an expansion team in top-tier MLS.

North Carolina FC will be coached this year by Dave Sarachan, familiar face to Americans fans from when he served as the interim head coach of the U.S. national team for a year starting from November 2017. The move will allow Perez a chance to adjust to the professional game, build up his resume for a U.K work permit, and prepare for the U-20 World Cup this summer.

“It's a club that is trying to get into MLS and it's had its ups and downs,” Perez said. “With Dave Sarachan being the new coach, he really knows what he wants to do and he wants to make the club successful. He's brought in a talented group of guys that I feel really comfortable around and can help me the most development-wise. They're going to develop as much as I can be so that when I move to Celtic, I am comfortable and I can have some experience at the pro level.”

Also important at North Carolina will be Perez’s adjustment to the right back position. In college and at the youth levels, Perez was a winger. It really wasn’t until he was with the U.S. U-18 team when head coach Omid Namazi and his staff began to feel that his best position would be as a right back due to his athleticism and speed over longer distances.

While Perez enjoyed the switch immediately and agreed that his future was on the backline, he is still a newcomer to the position. At North Carolina FC, he will look to further grow in the role.

“Throughout my whole life I had been playing as a right winger” Perez explained. “With the national teams, I was playing as a right winger but I got converted to a right back. The coaches saw more potential in me there because of my athleticism. I could run up and down the sidelines at a fast pace all the time and get good crosses in. My coaches then helped me improve on my positioning. I got the hang of it pretty quick and I like it a lot. My national team coaches said when they saw me playing it that it would be my future position as a professional.”

Of course, the move to North Carolina FC won’t be far from where Perez most recently played in college for the North Carolina State Wolfpack. The program is also where current U.S. U-20 head coach and former U.S. national team captain Tab Ramos went to school.


But college soccer has seen its role in the American soccer landscape decline since the days when Ramos played. Now most young players elect to turn professional at younger and younger ages in part because there are more opportunities domestically and also because European teams scout American players at younger ages.

“It really taught me to be disciplined and a better person overall,” Perez said of his time at N.C. State. “Having to deal with academics and then go to soccer practice and then tutoring. When you turn pro, one of the main things you have to be is disciplined. Soccer-wise, it was a pretty good level. I was playing in the ACC which I think is the best conference… My coaches knew this moment was coming for so they worked hard to make sure I was ready for the next level.”

But before Perez heads to Scotland, the big test for him will be the U-20 World Cup. While Perez was on the World Cup qualifying team, there will be plenty of competition at his right back spot – most notably Ajax’s Sergino Dest and Sporting Kansas City’s Jaylin Lindsey.

Perez understands the high level of competition that awaits him to make the final 21 player roster but he awaits the challenge and a deep run in Poland.

“For myself, I think I am working hard and competing hard so that I can hopefully be one of the starters at the World Cup,” Perez said. “ It's a really talented group. There are always going to be players who are really good in your position. Going into the World Cup, I just have a really good feeling about the team. At CONCACAF, we just ran through every team. We were playing really well and we didn't even have all the players we could have had to make the team even better. I think we could have a really good World Cup but we have to have everyone there.”