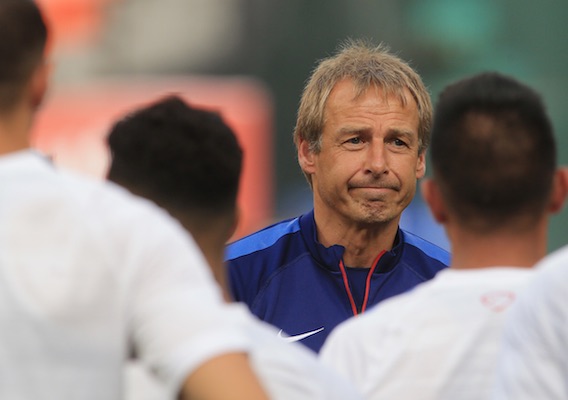 Saturday's showdown with Mexico will give Jurgen Klinsmann a chance to erase the unpleasant memories of his dismal 2015 Gold Cup. Yesterday he named a 23-man roster he hopes will get the job done.
BY John Godfrey Posted
October 04, 2015
9:25 AM

JURGEN KLINSMANN'S JOB may not be on the line next Saturday when the U.S. faces Mexico (9:30pm ET, Fox Sports 1), but it probably should be. The 51-year-old coach has had 50 months to implement his policies and get to know his personnel—all with unprecedented resources and control.

Has the team improved since Klinsmann predecessor Bob Bradley got the axe in July 2011? By any objective measure—tournament results, World Cup performances, matches against Brazil—it has not.

After winning the 2013 Gold Cup, Klinsmann's men failed badly at the 2015 tournament, losing to Panama and Jamaica en route to a 1-2-1 record and a fourth-place finish. That sad showing has led us to this: a one-match playoff against Mexico—the CONCACAF Cup—to determine which team represents the continent in the 2017 Confederations Cup.

It will be the team's biggest game since it fell to Belgium on July 1 in Salvador, Brazil. Klinsmann named the roster last night—here it is.

“This roster is obviously full of experience,” said Klinsmann. “This is about having a group of players who understand exactly now what this is all about. This is about momentum. This is about high energy. This is about representing my country. This is about belief and a high-level of aggressiveness in a one-off game to beat Mexico and to get to the Confederations Cup. It’s a unique opportunity, and you have to embrace it and give everything you have.”

As always, injuries factored into the formation of this squad, and Klinsmann acknowledged three players who likely would have earned strong consideration had they been healthy.

“Obviously it’s a specific moment now, and in that moment John Brooks is not 100 percent," the coach said in a U.S. Soccer press release. "Aron Johannsson is not 100 percent. Greg Garza actually had surgery a few weeks ago. There are always players that you’d love to have be a part of games like this that are just not there. It’s unfortunate for them, but it is reality.”

If recent history is any indication, you could probably name eight of 11 U.S. starters right now.

Klinsmann has already said that Brad Guzan is his No. 1 goalkeeper while Fabian Johnson, Jermaine Jones, Michael Bradley, Alejandro Bedoya, Gyasi Zardes, Clint Dempsey, and Jozy Altidore are all but certain to march out onto the Rose Bowl pitch six days from now.

The three spots that would appear to be up for grabs are all on the back line.

With Brooks unavailable, Klinsmann will have to identify a new starting central defense pair for the CONCACAF Cup. His preferred option at the Gold Cup, Brooks and Club America's Ventura Alvarado, struggled badly against mediocre competition. Los Angeles Galaxy central defender Omar Gonzalez hasn't played particularly well this season, and he did not even make the 23-man roster.

"The competition is very, very tight," Klinsmann said. "Not having Omar Gonzalez or Mix Diskerud on this roster, for example, is not because they are not good enough, it’s just because you see another player that is better in their position right now in this specific moment. Those are always tough decisions that a coach has to make, and we believe everyone in that roster will get the job done and the other ones are there to support."

Do you like the roster? Do you think the Yanks will get it done next Saturday? Share your thoughts below.