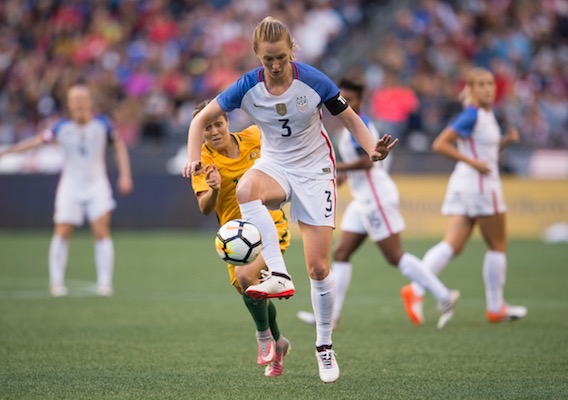 The 24-year-old midfielder fell just short of making the 2016 Olympic roster but has found a way to turn that disappointment into motivation as she becomes a regular starter with the U.S. national team.
BY John D. Halloran Posted
August 01, 2017
7:00 AM

WHEN TRACING THE ARC of their careers, many great athletes can identify a single moment of disappointment that proved to be a turning point.

For United States women’s national team midfielder Sam Mewis, that moment may have been missing out on the 2016 Olympic roster.

"I definitely think it was a motivating factor,” Mewis told American Soccer Now. “It showed me that I wasn't there yet. It showed me that there were so many parts of my game that had to evolve if I wanted to continue to be part of the team.

“I think it was eye-opening for me and I'm grateful that I was able to go through it and be able to see it that way because I think I'll look back on that and say maybe that was a turning point."

Although Mewis missed the final roster, she did travel with the team—as an alternate. And while the 24-year-old insisted that simply traveling and training with the team was “a huge honor," she also admitted her status as a backup proved difficult at times.

“There were parts of it that were challenging,” said the Massachusetts native. “I, of course, wanted to make the squad and while I completely understand that wasn't what was best for the team at the time, it was still disappointing.”

Following her Olympic setback, Mewis didn’t have to wait long to get another chance. When the Americans returned to action last September, head coach Jill Ellis selected Mewis for the starting XI. This proved to be a sign of things to come as the midfielder has now earned caps in all 15 matches dating back to last summer.

U.S. co-captain Becky Sauerbrunn thinks Mewis’ attitude has proved to be instrumental in her development.

“Having someone like her in front [of me], she’s strong on the ball, she’s got a good range of passing, [she’s] great in the air. She can take space really well. She’s a really great midfielder to play behind.”

Now a fixture in the lineup—and one of only five players to earn time in every match since the Olympics—Mewis realizes she needs to become a consistent contributor.

"I am starting to recognize that I need to bring more and more every chance that I’m getting. It’s not enough to just be out there, I need to be contributing. I’m expecting more for myself and I think the coaching staff and my teammates are expecting more from me.”

On Sunday, against Brazil, Mewis contributed early. Facing a 1-0 deficit after Brazil tallied in only the second minute of play, Mewis hit back with an effort from the top of the box in the 18th minute to level the score.

While the UCLA alumna came up through the youth ranks primarily as a No. 10—helping the U.S. U-20 team to a World Cup title in 2012 and winning All-American honors in college—she’s been playing deeper in the midfield for Ellis and the senior team.

Usually partnered with Allie Long in the middle of the pitch, Mewis described the role as a combination of a No. 6 and No. 8, where either midfielder can go forward, as long as one stays home. In the last few matches, she’s shown her passing range in the position, frequently switching the point of attack while also providing an important physical presence in the center of the field.

Mewis explained that she’s playing a similar position this season with her club, North Carolina, where she’s produced some highlight-reel assists and helped lead the Courage to second place in the league standings.

In North Carolina, Mewis is one of seven players to receive U.S. call-ups in recent months, along with Abby Dahlkemper, Lynn Williams, Taylor Smith, Jaelene Hinkle, Jess McDonald, and Ashley Hatch. It's something Mewis said has paid dividends for the club.

“We’re all so happy for each other when we get these kind of opportunities,” Mewis added. “It's a genuine happiness and that kind of selfless care for someone else is what really makes the North Carolina team so special. It’s been, overall, such a positive experience with both teams. With my teammates on the Courage, getting to share these cool opportunities with them and knowing that they’re really happy for me and I'm really happy for them.

"It's a genuine, selfless feeling and I think that really shows through our play on the field.”

In the last two matches for the Americans, Mewis’ North Carolina teammates Smith and Dahlkemper accompanied her in the starting XI. But despite her recent success and 15 straight caps, Mewis knows that international play can be unforgiving.

“I don't take anything for granted, I know it can change at any moment,” said Mewis. “I want to keep contributing to the team in whatever way I’m able to.”