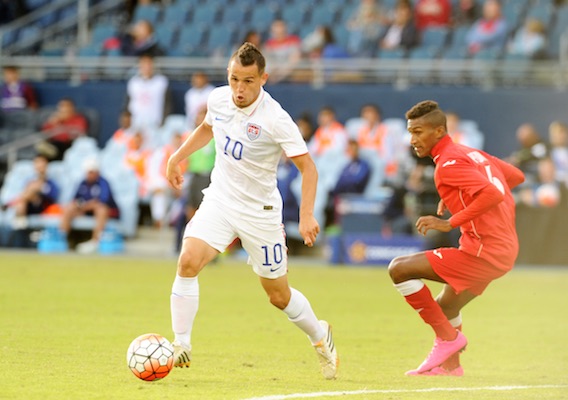 The United States under-23 men's national team tinkered with its lineup and it worked, defeating an undermanned Cuba side and guaranteeing a spot in the semifinal round of Olympic qualifying.
BY Brian Sciaretta Posted
October 04, 2015
8:00 AM

KANSAS CITY, Kan.—The United States U-23 team booked a place in the semifinals of CONCACAF Olympic qualifying with a 6-1 rout over Cuba. Work remains in some key areas, but the Cuba game showed how the team is coming together for the important games ahead. Here are my takeaways from Saturday’s match.

Man of the Match: Luis Gil

After the U.S. team lost the possession battle against Canada in a 3-1 win Thursday, Andi Herzog made one significant change in the midfield, starting Luis Gil at the front of the diamond in place of Gedion Zelalem.

The moved worked, too, as Gil had a field day picking apart Cuba’s defense. He finished with two assists and crafted another goal when he fed a perfect through-ball to Jordan Morris, who then sent it on to Kiesewetter for a tap-in.

For all the worries over whether Gil would be sharp given his limited playing time with Real Salt Lake, he thrived on the international stage.

Yes, Cuba is significantly inferior to upcoming opponent Panama, but Gil’s awareness of his teammates’ tendencies and chemistry with them was remarkable. His presence helped the midfield connect noticeably better and, in general, have its way with the Cuban defense.

The United States scored two goals in the first half off set pieces, as center backs Matt Miazga and Cameron Carter-Vickers both headed home crosses. That kind of play is an important piece in the team’s offensive toolbox.

On the flip side, however, the Americans’ defending of set pieces needs to be better. Like Canada, whose lone goal Thursday came off a dead ball, Cuba had occasional moments Saturday where it exposed the U.S. team’s defense.

“We still have to improve a little bit in set pieces defensively and attacking-wise,” Herzog said. Carter-Vickers and Miazga are "young, they're powerful, they're really good. They're the center backs of the future, but they have to prove it from game to game.”

On Monday, Molde goalkeeper Ethan Horvath will join the U.S. squad in his home state of Colorado for the final group stage game. Earlier in the summer he was named to the U.S. U-20 World Cup team, but Molde withdrew its release at the last minute and Horvath was forced to miss out. Horvath, though, spent that time back at his club taking over the No. 1 spot.

Since then he has played fantastic soccer in both the Tippeligaen and the Europa League. He was recently named to the Europa League team of the week for his saves in Molde’s 1-1 draw with Ajax.

So with Horvath playing very well right now at a high level, does he start the important games ahead in place of the hitherto standout Zack Steffen?

“It's nice to have very good goalkeepers,” Herzog said. “It's better to have very good goalkeepers and you have to make a tough decision as to who will play instead of looking for a goalkeeper who will keep us in the game. For Ethan, the last few weeks were great for him. He now has a huge impact with the defending champions in the Norwegian league. I talked to his goalkeeping coach and they're really impressed.

“For us with Zack Steffen, Charlie Horton, and Cody Cropper, who is injured—we have a lot of really good goalkeepers. But for us right now, Zack and Ethan, of course, they are really good.”

Expect to see this lineup again

While it is imperative that the U.S. team wins Group A so as to have the best chance of avoiding Mexico, the semifinal game is by far the most important one left, and Herzog will have to take what he has learned from the group stages and play his best team in that contest. There is no more experimenting at that point, no more playing players based on potential or what seems best on paper.

With a spot in the Olympics on the line, that semifinal match is about what is best in the present moment.

It is very likely that the starting lineup used against Cuba is going to closely resemble the lineup in the semifinal. Potential changes include the aforementioned goalkeeping decision and the uncertainty of left back, as Marc Pelosi and Dillon Serna each played decently despite both being out of position.

The chemistry is not completely there yet, as many players are very young and new to the team. But with one more group stage game left before the decider, the U.S. team is certainly creating momentum and confidence.

Looking ahead to Panama

Panama has had an awful tournament so far, tying Cuba despite having most of the scoring chances and then making far too many mistakes in Saturday's loss to Canada. It has talent, but it is likely out of the tournament anyway.

Any positive result against Panama (Tuesday at 9:30pm ET) will secure first place for the Americans, and anything worse than first would require a loss and for Canada to make up a six-goal differential against Cuba.

“We have to be smart, too, because there are a lot of games in a short period,” Herzog said. “We have to think about bringing in some fresh legs and resting some players, but in the end we want to win every game. I have confidence in every single player that is on the roster. That's why if we make some changes for the game against Panama, we will still have the same optimism, and I will expect to win.”