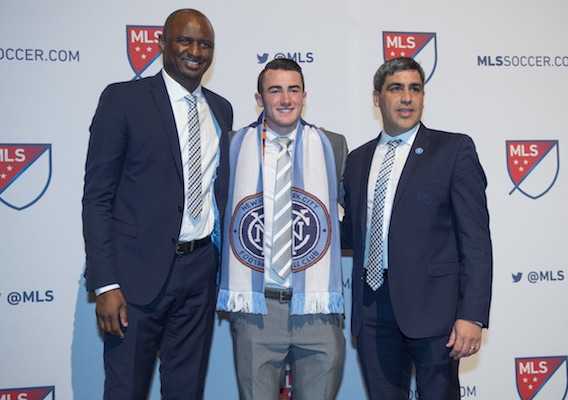 NYCFC, Union, and Fire All Make Bold Moves in Draft

New York City FC traded up to get a player it coveted, Philadelphia drafted touted prospects who play positions of need, and Chicago appeared to bolster its young core of players in the MLS SuperDraft.
BY Brian Sciaretta Posted
January 15, 2016
6:00 PM

THE FIRST TWO ROUNDS of the 2016 MLS SuperDraft are in the books but the winners and losers won’t be known for months—or maybe even years.

Still, this year’s draft class appears to be deeper and more talented overall than the 2015 iteration, and what ensued was revealing. New management at Philadelphia and Chicago took their first steps in their respective roles, while New York City FC made waves in an effort to recover from a dismal first season.

Here are five early impressions on the proceedings.

NYCFC gets its man

Coming into the draft it was pretty clear that New York City FC was set on Wake Forest midfielder Jack Harrison—one of the youngest players in the draft and perhaps the most talented.

Chicago drafted the English-born Harrison with the top overall pick, then traded him to NYCFC a few picks later and selected Stanford left back Brandon Vincent. So both teams got the player they wanted.

But why, exactly, NYCFC so coveted Harrison is a bit of a head-scratcher. The club needs help in many areas, but midfield was the one spot where it appears to have no need for additional depth: Frank Lampard, Andrea Pirlo, and Mix Diskerud play centrally, while Patrick Mullins and Kwadwo Poku earn regular minutes on the wing and a bit further up the field.

Acquiring Harrison, the freshman who terrorized ACC defenses, makes sense only if a current NYCFC midfielder or two are on their way out. Could Diskerud be one of them?

The Union has had numerous high draft picks in its history but has never been able to establish a core group that could help the franchise become a contender. With three picks in the top 10 this year, the Union was under pressure to get it right. It needed to find a Matt Hedges-type pick—a team leader it could build around in the years ahead.
In his first moves as Sporting Director, Earnie Stewart selected central defender Joshua Yaro and right back Keegan Rosenberry with the second and third overall picks. These were not terribly controversial, as both players were consensus top 10 players (although Rosenberry was not expected to go quite so high). The familiarity the two established after playing together at Georgetown University should only help with their transition.
While Philadelphia vastly improved its backline with Rosenberry and Yaro, there will be legitimate questions as to why it didn't select Brandon Vincent instead of Rosenberry. Philadelphia needed help across the backline and talented and mature left backs like Vincent are much harder to find in the draft than players in any other position. Was Rosenberry an upgrade for Philadelphia? Yes. But if Vincent's stock continues to soar, Union fans will wonder how he got away.
Depite that, Philadelphia is improved and when you throw in German forward Fabian Herbers out of Creighton, taken sixth overall, the Union have three players who will be expected to contribute from day one. With all three playing positions of need, Stewart took his first steps in helping to get this struggling team on the right path.

New Chicago head coach Vjelko Paunovic told ASN in December that he wanted to build from the backline out, and despite passing on Yaro the team made very smart picks that were aligned with that vision.

Instead of drafting Vincent with the No. 1 pick, the Fire traded down to get him with the fourth while trading Harrison to New York for its draft pick and some allocation money. At No. 12, Chicago then added former U.S U-18 central defender Jonathan Campbell from the University of North Carolina, another player who could potentially start right away.

The result is not only a strong attempt to retool the defense but also an even larger core of young American players on the Fire’s roster, with Vincent, Campbell, Harry Shipp, and Matt Polster. Chicago has disappointed on the field in recent years, but today the club’s fans should feel optimistic for a change.

There is no MLS team more depressing these days than the Colorado Rapids.

While Chicago and Philadelphia lost with young players last season in an effort to rebuild, Colorado lost with older athletes. Promising young talent was either benched or sold. Coach Pablo Mastroeni is back for another season—and it’s not clear where he is taking the team.

The big news out of the draft on Thursday was that Colorado was eyeing United States national team midfielder Alejandro Bedoya, and the big news later in the day was that Bedoya was out…and Tim Howard was (ambitiously) the new target. There were also reports that linked the Rapids to Mexican national team forward Alan Pulido. That would, of course, help, but depth is clearly an issue.

The draft did little to assuage those concerns. Colorado traded its second pick for general allocation money and drafted Emmanuel Appiah, a player very similar to Dillon Powers, with the 15th overall selection.

A little more than a month has passed since the Timbers won MLS Cup, but what should have its fans feeling upbeat is that despite some players leaving the club is making some shrewd moves. Jorge Villafana, Will Johnson, Maximiliano Urruti, and Gaston Fernandez may all be gone (while Rodney Wallace looks to be on his way out soon), but Portland has been proactive, adding Jack McInerney, Chris Klute, Zarek Valentin, and Jermaine Taylor.

At the draft, the Timbers might have picked up the steal of the first round with British-American forward Ben Polk, 23, whom many expected to be drafted much higher after a strong combine. While he might not start right away, it's easy to see Polk contributing and doing well in his rookie season. It would not be surprising if people later question how he was able to fall to the 20th overall pick. All told, Portland did about as well as a team in its draft situation could have.