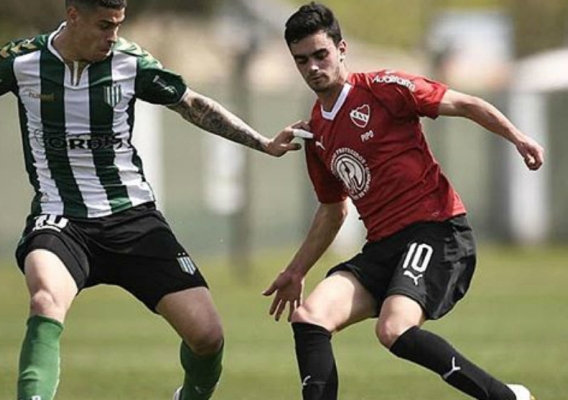 With a father who was a Boca Juniors legend and an older brother who played for the 2015 U.S. U-20 World Cup team and is also playing in Argentina's top flight, New Jersey-born Alan Sonora is starting to pave his own way as a footballer. Now with his Independiente debut within grasp, the American midfielder hopes to catch the eye of U.S. Soccer - possibly for the U-23 team which will attempt to qualify for the Olmypics next year.
BY Brian Sciaretta Posted
July 24, 2019
2:00 PM
AS AMERICAN soccer continues to evolve, the concept of having soccer families that succeed at high levels across generations has begun to materialize. Giovani Reyna, Ian Harkes, and Tommy Thompson are current professionals whose fathers played for the United States national team. Jonathan Klinsmann, Timothy Weah, Jesus Ferreira, and Darlington Nagbe are current American players who had fathers who were international standouts with other countries.

In Argentina, one of the world’s great footballing countries, the Sonora family is making strides in its second generation. After a six season’s with the first team of Boca Juniors where he made over 200 appearances, Argentine defender/midfielder Diego Sonora traveled to the United States to play for the Dallas Burn of the upstart Major League Soccer in its inaugural 1996 season.

Sonora achieved a lot of success in MLS where he played for Dallas, DC United, the Metrostars and Tampa Bay Mutiny before returning to his native Argentina in 2002. But during his years in the United States, two of his sons were born – Joel Sonora in Dallas in 1996 and Alan Sonora in New Jersey in 1998 and over the last two decades Joel and Alan, both attacking midfielders, have blossomed into professional players.

A veteran of the 2015 U.S. U-20 World Cup team, Joel Sonora made his professional debut in Argentina’s top flight last season where he made 18 league appearances and three Copa Libertadores apperances with Talleres de Cordoba.

Now ahead of the 2019/20 season, Alan Sonora, 20, is looking to make his professional debut after last week being promoted to the first team of Independiente – one of the most storied clubs in Argentina which has won the Argentine Primera División 16 times and the Copa Libertadores seven times. Now the younger Sonora could add to his family’s impressive legacy in the sport.

“I saw growing up in a footballing family as something normal because ever since I was born my father gave me a ball as my first toy,” Sonora told ASN from Argentina. “Playing in the first division would be a great honor for me and my family. My expectations are to try to stay with the first team and continue growing. I’m not sure when I’ll debut but I’ve always had the dream of being able to debut.”

That debut might come as soon as Thursday when Independiente hosts Universidad Catolica in the round of 16 of the Copa Sudamericana. On Wednesday, Sonora was named to the roster for that game.

Like his older brother, Sonora played in the youth academy of Boca Juniors where their father continued to work in youth coaching after his playing career. But the departure of both Joel and Alan from the famed club was highlighted recently by Argentina’s media which said that the both brothers left Boca due to an ongoing feud between Diego Sonora and reserve team manager Rolando Schiavo.

“I had the problem with Schiavi when he had problems with my son Joel, now I wouldn't sit for coffee with him.” Diego Sonora recently told Lmneuquen. “At Independiente, they saw him for less than an hour and they told him that he was going to be a player of the club. It's very nice what happened this week."

But Alan Sonora is happy with how things turned out with Independiente after leaving Boca Juniors in early 2018. He was not expecting a steady climb in the reserves but appreciates the atmosphere at the club. But being named to the first team was not something he was expecting so soon.

“I was not expecting it when they told me that I had to leave Boca,” Sonora said of his recent promotion. “But luckily, I arrived to Independiente where they treated me well and I was able to keep growing as a footballer and person.”

“I went back to the U.S. for the first time in 2009 when they celebrated the 10-year anniversary of DC United’s championship,” Sonora said. “Later we went back on vacation twice to Miami. My parents still have friends in the U.S. from when we lived there. [My father] always told me things about MLS. Here in Argentina it is seen as a league that is growing every day.”

“It would be wonderful to play at an international level with USA,” he added. “We talk a lot about Joel’s experience and he told me it was a really great experience.”