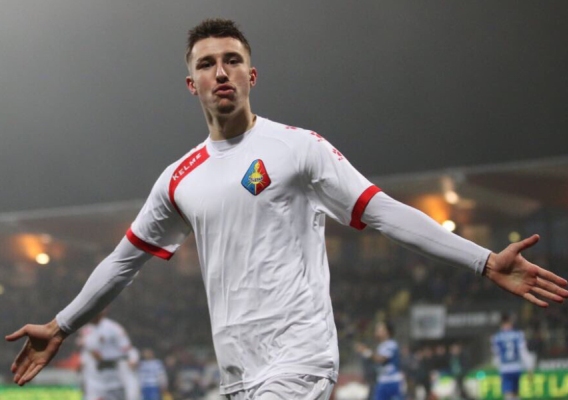 Novakovich thriving for Telstar in a tight promotional race

One of the most surprising stories this year in American soccer has been Andrija Novakovich's breakout while on loan from Reading with SC Telstar. The Wisconsin native is the second leading scorer in the Dutch second tier, has his club in an unexpected promotional race. Will a USMNT call-up follow?
BY Brian Sciaretta Posted
March 15, 2018
7:30 AM
FEW WOULD ARGUE that 2017 was the roughest year in the modern history of American soccer. With that year now over, 2018 is a year when attention will be shifted towards the emerging next generation of players.

Most of the focus is on well-known players like Christian Pulisic, Weston McKennie, Tyler Adams, Zack Steffen, and Matt Miazga. But one of the most surprising stories has been SC Telstar’s Andrija Novakovich who is the second leading scorer in the Dutch second tier and had been the backbone of the club’s race for promotion.

Novakovich, 21, joined SC Telstar prior to the season on loan from his parent club Reading. Prior to the season, Reading’s manager Jaap Stam and Novakovich explored the idea of a loan to Holland. In the end, it was the right fit.

“With the Dutch being well known in their development, that is the first thing I thought about before coming here,” Novakovich said. “Another thing is Jaap Stam, of course, at Reading. He is Dutch and his staff and the technical director all have a Dutch background in football. They know everybody over here. He is a legend and is very popular in Holland. I thought it would be good to go to their country when the opportunity came up. I thought it would good to see how their football is and I thought if I could do well with their football, it'd be good for me that I could show them that.”

And as the season enters into its home stretch, it is hard to argue that Novakovich’s loan has been anything other than roaring success. Through 28 games, the Muskego, Wisconsin native has scored 17 goals and added four assists. More importantly, he has his team in fourth place and in the playoff positions for promotion. He has made numerous teams of the week for his league.

SC Telstar is a small club that plays in a stadium that fits roughly 3600. Based in the town of Ijmuiden, it is located near the coast and at the mouth of the North Sea Canal. The club is not used to this level of success and the thought of promotion to the Eredivisie is almost unthinkable to many.

With the team’s success this year, attendance at Rabobank IJmond Stadion has been increasing and getting louder. The pressure of these games is exactly why Novakovich made the decision to go on loan and why he believes he is a better player now than had he stayed in England and played with Reading’s U-23s.

“Since I've been here, the games mean so much more, every game,” Novakovich explained. “You have that little bit more pressure and a little bit of excitement. Some times in England, in the reserves at least with the U-23s, not every game matters, almost. That's kind of the feeling you get…I wanted to get into that first team where it's almost kind of ruthless. That's the nature of the business. It's almost kind of cutthroat. Just to get that little bit pressure and all around elements, I definitely think it's helping me. I still have a lot to learn.”

After this season, Novakovich will return to Reading and his goal is to prove to Stam that he is capable of being a consistent contributor to the club’s ambition of eventually returning to the Premier League. After losing its playoff final in 2017, the current season has been a disappointment as it sits in 19th place in the 24 team league. Despite being in Holland, he is in touch with members of the Reading organization every week. Novakovich acknowledges that Reading is on the back of his mind and that he is goal is to succeed there, but for now he focus is entirely on Telstar.

“I don't think anybody expected to have this type of season that we're having, if I am honest with you.,” Novakovich said. “But I know a lot of other players coming into this season, like me, we weren't really thinking about promotion and relegation. We just wanted to express ourselves, work hard, and win every game. It's a good group. We're really a team. Everyone gets along and it's a great atmosphere. It's a great vibe and we're now getting attention from the media.... we just want to win our next game.

“The fans, they are brilliant,” he continued. “Every game, our stadium is getting more and more full. It's getting louder. Fans are reaching out to me on social media and saying nice things, which is great. Sometimes negative things (laughs), but that's what comes with the game. It's exciting for them. They've stood by us and it has been a historic season for them. They haven't been in this position for a while and it's nice to give this to them. They are hardworking people. It's almost on the coast, the mentality is hard-working and many are fisherman. You can see in how they cheer. It's good that we can give something back.”

With his success in Holland, there is speculation that Novakovich could be on the radar for the U.S. national team. Interim head coach Dave Sarachan told reporters last month that the objective for 2018 was to give new players are chance to show what they can do at the international level. While second tier of Dutch soccer is a lower level, Novakovich is thriving under pressure and his numbers are impossible to ignore.

As a young player, Novakovich was a regular with the U.S. youth national teams. In fact, he had plans to attend Marquette University but was discovered by Reading while playing for the United States U-18 national team. His parents are both Serbian but his mother was raised in England where his grandfather. Rade Prpa., played for Bicester Town and Oxford City.

He would consider it a huge honor if his success in Holland could give him a chance with the national team.

“It's always a great honor to represent your country on an international level,” Novakovich said. “For American players going abroad or pursuing their goals outside of MLS, it's almost a stepping stone to get to get to that level if you're on the national team at a young age - like 17 or 18. I was there. I was with the U-17s and the U-18s, then I got to go to England and have these opportunities. It's really nice. Once you're there, you want to keep improving.”

“For the moment, I am just focused on my club career and getting better,” he added. “But if I could give back, obviously it's great. I would love to. But if it doesn't happen, you can't let it bother you or be negative. There are so many good players. The main thing is that I believe in myself, hopefully if you do well with your club, they'll come calling.”

As Sarachan or whoever the next coach is bring in new players, it will be a huge opportunity for them and a test to see who responds. Novakovich is particularly important given the small number of young American forwards currently succeeding either in Europe or MLS.

A lot of attention is on players like Josh Sargent and Tim Weah but Sargent, while talented, has yet to play a professional game. Weah earned impressive minutes for Paris St. Germaine but will mostly likely play mostly for the reserves. Meanwhile Novakovich is scoring goals in droves while leading his club to promotion. And he makes it clear that if the national team calls, he will be ready to help.

“Hearing the news that we didn’t make the World Cup, it was very devastating to most U.S. Soccer fans,” Novakovich said. “That was my initial reaction of disappointment. Everybody wants to go to the World Cup and everyone wants to support their country. It was disappointing for everybody. If they are willing to call me, I'll always be ready. We are the next generation and we have to do something to make the next one.”