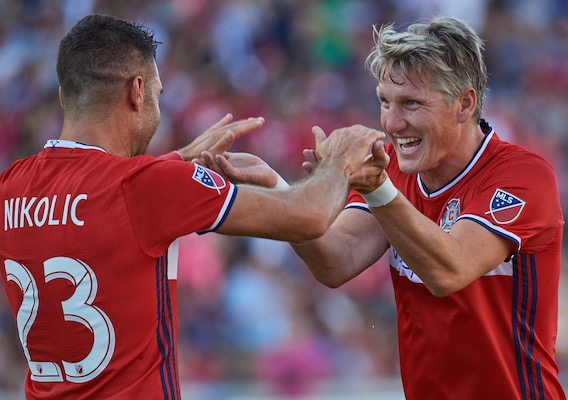 DEPTH, or a lack thereof, decided the outcome of many games during the busy midweek slate. It probably will again this weekend, though Saturday’s marquee showdown in the Bronx might be one of the exceptions.

After resuming play on Wednesday with a handful of matches, MLS returns to the spotlight in earnest with all 22 teams in action this weekend. Arguably the biggest brawl will take place at Yankee Stadium on Saturday afternoon, as David Villa and New York City FC welcome Bastian Schweinsteiger and the Chicago Fire to town in a match-up of the second and third-place teams in the Eastern Conference.

Both sides will be missing at least one key player due to the ongoing CONCACAF Gold Cup. The Fire will be without midfield cog Dax McCarty and NYCFC will not have dangerous winger Rodney Wallace (in addition to injured fullback Ronald Matarrita).

Still, the encounter is one you will not want to miss. Two of the more clinical finishers in the league will be going head to head. The in-form Villa will lead NYCFC after scoring yet again on Wednesday and current Golden Boot leader Nemanja Nikolic will be on the other side looking to add to his season haul while trying to get closer to MLS’s long-standing single-season goals record.

Also adding intrigue is that Chicago is entering the game on an impressive 11-match unbeaten streak. The club has not tasted defeat since late April, so confidence is in surplus right now. The Fire also has the benefit of being well rested for this tilt, as it did not have a midweek fixture.

New York City, meanwhile, will be looking to right Wednesday’s wrongs. NYCFC settled for a 2-2 draw at home against a weakened Toronto FC team after giving up a penalty kick in stoppage time. Patrick Vieira's side needs to get back to playing better defense if it plans to stay among the league's elite.

BATTLE OF THE SOUTH

This could be the beginning of something special.

Orlando City and Atlanta United, the only two teams currently residing in the southern part of the United States, will collide for the first time on Friday night. The word "rivalry" gets tossed around a lot in MLS—far too much, actually—but this meeting in Central Florida could be the initial chapter of one of the more intense ones in the league.

Heck, Atlanta United already caused a stir with a trash-talking billboard it put up in Orlando.

Via @CBrueyWFTV, this #ATLUTD billboard is up in Orlando. Rivalry anyone? pic.twitter.com/K5WnsNkidW

There is sure to be ample passion in the stands for both clubs, and there should be a good bit of quality on the field as well, with the likes of Kaka, Miguel Almiron, and Josef Martinez all healthy and available for selection.

TWO SIDES OF THE COIN

The Seattle Sounders and D.C. United made history in their match on Wednesday, but only one of them is celebrating that.

The Sounders became the first team to come from three goals down and win in regulation by posting a thrilling 4-3 home victory. Seattle will now try to build on that in the weekend’s final bout, as the San Jose Earthquakes pay a visit on Sunday night following its embarrassing 5-1 defeat at the hands of the New York Red Bulls.

Clint Dempsey and Jordan Morris will be missing for Seattle because they have a U.S. national team game the day before, but the club and its attack proved during the midweek contest that they can make due without them.

For D.C. United, a disastrous season only got worse with Wednesday’s epic collapse and confidence has to be at an all-time low. The good news for D.C. is that it gets to return home for a Saturday match with a Houston Dynamo side that is still winless on the road this year. Regardless, there might not be too many butts in the seats at RFK Stadium given that the 2017 campaign seems to be all but over for D.C United.

AND SO WE MEET AGAIN

Two familiar foes will get reacquainted in Sunday’s early game. One will be a bit weaker than the other, however.

Cascadia rivals the Vancouver Whitecaps and Portland Timbers will face off on Sunday afternoon, and it is the Canadian side that has the advantage this time around. Not only will Vancouver be playing this match in front of its supporters at BC Place after beating the LA Galaxy on the road on Wednesday, but the Whitecaps also have a mostly full-strength squad available for selection. That includes dynamic Peruvian attacker Yordy Reyna, who made quite the impression the last time he played at BC Place.

Portland, on the other hand, is going to play shorthanded. On top of missing Darlington Nagbe, Darren Mattocks, and David Guzman because of the Gold Cup semifinals, the Timbers are also dealing with a number of injuries. The club’s depth seemed to be an issue in a 4-1 home loss to Real Salt Lake on Wednesday, so Portland head coach Caleb Porter has his work cut out for him.

TRY AND STOP ME

FC Dallas needs to be on high alert this weekend: Blerim Dzemaili awaits.

The Montreal Impact triumphed, 2-1, over the Philadelphia Union on Wednesday, and, to almost no one’s surprise, it was Dzemaili who made the difference with his impressive quality. The designated player now has four tallies to go along with four assists in his first eight appearances in MLS, and he will seek to add to that against a Dallas team that will be without U.S. internationals Kellyn Acosta, Matt Hedges, and Jesse Gonzalez.