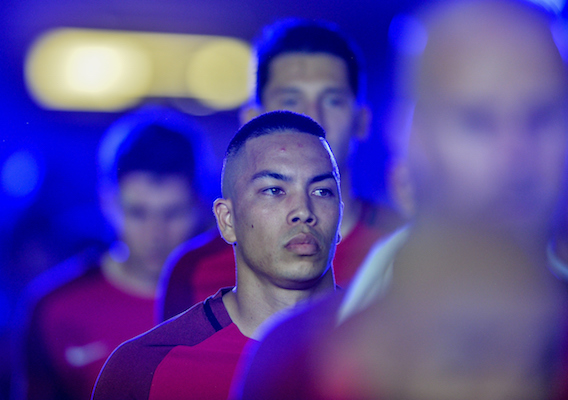 Portugal awaits the U.S. men's national team in November—and perhaps another team as well—so Brian Sciaretta assessed the situation and came up with a proposed roster that could really shake things up.
BY Brian Sciaretta Posted
October 17, 2017
3:00 PM

U.S. SOCCER ANNOUNCED MONDAY that the United States national team would face Portugal on November 14 for a friendly in the southern Portuguese town of Faro. As of now, there is no interim head coach in place to lead the team through the next international date although the logical choice seems to be U-20 head coach and former national team captain Tab Ramos.

Last week, Sunil Gulati announced that there might also be a second game scheduled in November and that the U.S. would continue to play a full slate of games in 2018 despite having been eliminated from the World Cup.

For most American fans, the November international break (or even all of 2018) is very tough to be excited about as many are embarrassed and humiliated following a fifth place finish in the hexagonal. Former U.S. national team legend Frankie Hedjuk seemed to say what was on the mind of many.

I don’t really care about that to be honest!!

Hardcore supporters of the U.S. national team want to see a young squad for these games and do not seem interested in a tam filled with players who were on the roster for the dismal qualifiers in September and October. Given that there will be no meaningful games for 20 months, that makes sense.

That's also why it makes sense for Ramos to start the youth movement on an interim basis since he has worked with just about every top young American player since taking over the U-20 program in 2011.

CREATE YOUR OWN ROSTER FOR THE PORTUGAL MATCH

Plenty of questions remain regarding the November game(s). Would Ramos, or whoever the interim coach is, bring in any veterans to help with the young players? If so, who? Also, how would the MLS playoffs affect the roster decisions? Of course clubs are required to release players for FIFA dates but the friendlies in Europe are largely meaningless. It's hard to justify taking MLS players away from their clubs while a league championship is on the line.

It is impossible to say how Ramos (or whoever the coach is) will treat this game. But here is a lineup I believe would be appropriate. While many fans are justifiably excited for the U-17 right now, those players are not ready yet. With such a long time to go before the next meaningful game, there is no hurry. Instead, you want to have a youth-heavy roster that mixes potential (including a few long shots) along with players who are playing real first team minutes.

Once the national team’s greatest position of strength, the goalkeeping ranks have fallen on hard times. Tim Howard’s days are certainly over. Brad Guzan is decent but not a long-term option. The same could be said for Nick Rimando or other potential options who are past the age of 30 (Luis Robles, Tim Melia, etc).

New blood is needed at this spot. Columbus Crew SC Zack Steffen was a standout at the 2015 U-20 World Cup and has established himself as a starter for Columbus. Ethan Horvath starts for Club Brugge and Jesse Gonzalez recently used his one-time switch to leave Mexico and join the U.S. team—but has yet to get a cap.

Steffen is somebody fans should keep a sharp eye on. He has the athletic ability to make huge saves and has improved a lot in 2017.

The last two U.S. U-20 World Cup teams have produced a wave of very promising young central defenders. Matt Miazga won a Dutch Cup for Vitesse and is a starter for the Eredivisie team while on loan from Chelsea. Cameron-Carter Vickers is finally shaking off the rust of inactivity at Tottenham and is impressing on loan for a Sheffield United team that could contend for promotion to the English Premier League. Justen Glad is one of the best young central defenders in MLS. Erik Palmer-Brown is only playing occasionally for Sporting Kansas City although he was the captain of the U.S. U-20 team and a player who has performed very well for Ramos.

Left back continues to be a problem but Brandon Vincent has raised his game this year and could enter the mix. Danny Acosta, a veteran of the 2017 U-20 team, has played well at left back for Real Salt Lake after converting from a central midfield role.

Right back will continue to be owned DeAndre Yedlin and it would hardly be surprising to see him wearing the armband for these games. His backup will be interesting: Tyler Adams is playing very well as a right wingback for the New York Red Bulls but his best position moving forward will likely be as a central midfielder.

If the coach for these games is Ramos, he is going to have his eyes on Weston McKennie, who he desperately wanted to participate in the U-20 World Cup this past summer but who he could not convince Schalke to release him. The same could be said for Jonathan Gonzalez, someone Ramos recently told ASN he speaks to on a regular basis. Finally, in the same interview Ramos also said he thinks very highly of Kellyn Acosta, who he brought to two U-20 World Cups.

There are other central midfielders to consider. Russell Canouse was a favorite for Ramos during the 2015 U-20 cycle but suffered an injury just days before the World Cup. He has played well this year since signing for D.C. United. Cristian Roldan was given a brief look by Bruce Arena in the 2017 Gold Cup but after a very good two-year run he now deserves an extended look on the national team. Meanwhile Djordje Mihailovic, 18, could sneak into the mix with a very good second half of the season for Chicago and perhaps see minutes if Ramos doesn’t want to overextend Pulisic for these experimental games.

The big problem for this generation is on the wings. There just are not many options here among young players. Assuming Christian Pulisic is a No. 10, Paul Arriola represents one of the few young wingers getting first-team minutes. Despite the disappointment of the last two months, Arriola is well worth keeping around. Also, Kelyn Rowe impressed at the Gold Cup before Arena’s strange decision to cut him after the group stages.

Ideally Kenny Saief would be great to have in the mix to be the left winger and Arriola on the right (with Pulisic in the middle) but also perhaps give Lynden Gooch a look. He is still not playing as much as he’d like for Sunderland but he has impressed over the past month with the chances he’s been given.

Even with an experimental roster, there are not a lot of options right now up top for the U.S., either domestically or abroad. Haji Wright is getting minutes for Sandhausen but it is hard to ignore the fact he never really seemed to draw much attention from Ramos.

Bobby Wood will obviously still be in the mix moving forward. Jozy Altidore has certainly had his ups and downs in 2017, but no one has pushed him out yet.

What do you think of Brian's proposed roster? Keep it civil and relevant and we will gladly post your thoughts in the Comments section below.