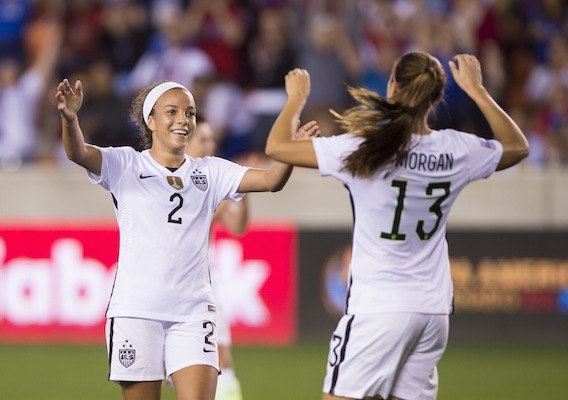 Well, that sure looked easy. The United States women's national team outscored its opponents 21-0 during Olympic qualifying, closing the deal Friday night with a resounding 5-0 win over Trinidad and Tobago.
BY John D. Halloran Posted
February 20, 2016
7:00 AM

THE AMERICAN WOMEN are going to Rio.

On the back of an Alex Morgan hat trick, the United States women’s national team beat Trinidad and Tobago 5-0 on Friday night in Houston, securing its place in the 2016 Olympic Games. Here are three thoughts from the decisive win.

In the year building toward the 2015 World Cup, many fans criticized U.S. head coach Jill Ellis’ reliance on older players and her seeming unwillingness to give younger players a shot.

However, Ellis has turned that fan frustration on its head during Olympic qualifyinq, not only naming a number of youngsters to the roster but giving them quality playing time in this tournament. Part of that is due to a series of injuries and pregnancies, but Ellis also dropped veterans Heather O’Reilly and Whitney Engen for the qualifying process.

One beneficiary of Ellis’ strategy has been 17-year-old Mallory Pugh. After scoring in her senior team debut in December, Pugh not only made the roster for qualifying but has started the last two games for the U.S.

On Monday, Pugh dominated lowly Puerto Rico, displaying a dazzling array of skill. She dominated in 1 v. 1 situations, kept her head up well in traffic, and set up a number of excellent scoring opportunities for her teammates with terrific vision and expertly weighted passes.

On Friday, Pugh earned another start, this one a bit more surprising considering the game’s importance as a one-off Olympic qualifier and the fact that she replaced Crystal Dunn in the lineup—after Dunn tallied five times against Puerto Rico.

How ridiculously deep is #USWNT? A 5-goal scorer in the previous match is replaced by a 17-year-old.

While Pugh did not dominate the match on Friday as clearly as she did on Monday, she was still very good.

She contributed the assist to open the scoring for the Americans, once again found her teammates in dangerous positions, and displayed incisive attacking runs. To be fair, she did miss a number of solid goal-scoring chances but her raw ability is obvious and the U.S. looks to have a player who will be a major contributor for years to come.

HEATH HAD AN OFF NIGHT

While Tobin Heath did contribute the eventual game-winning goal, she struggled for much of Friday’s match. Unlike the slick interchanges seen on the left side of the field between Pugh and left back Meghan Klingenberg, Heath and right back Kelley O’Hara never found a rhythm on their side of the pitch.


Heath couldn’t find the ball in the first half, only entering the picture on a number of occasions. When she did, her final product missed the mark. A series of missed touches, miscommunication with teammates, and excessive dribbling led to an ineffective night for the normally creative midfielder.

It’s far too early to draw any sort of overarching conclusion from this one game—especially considering the level of competition and the fact that Heath looked especially hungry during the U.S.’ nine-game Victory Tour following the World Cup—but she’ll certainly be under increased pressure to perform with Crystal Dunn and Pugh waiting in the wings.

Tobin losing possession after she tries to dance through 3 defenders is classic and frustrating. You're not a kid anymore Tobs. #USAvTRI

Despite the fact that the Olympic qualification process is over now that the U.S. and Canada have won their respective semifinal matches and qualified for Rio, the two will play in the final on Sunday (5pm ET, NBCSN).

Because of CONCACAF’s ludicrous schedule for this tournament—in which teams played five games over 12 days—the U.S. and Canada will enter the final on less than 48 hours rest.

With such a restriction, neither team will be at their best and may choose to heavily rotate their lineups. While the U.S. has enormous depth on their roster, such a rotation would take away Ellis’ ability to evaluate her preferred starting XI against a quality opponent—a rarity for the U.S. in recent months.

Since playing Brazil in a double-header in October, the U.S. has faced a series of weak opponents and faced a slew of retirements and roster adjustments.

Now, just when the midfield combination of Lindsey Horan, Morgan Brian, and Carli Lloyd looks to be hitting its stride—as it did against Trinidad and Tobago—roster rotations may limit fans and Ellis from seeing the trio play against a Canada team that presents a far greater challenge than the Americans faced against Costa Rica, Mexico, Puerto Rico, or Trinidad and Tobago.