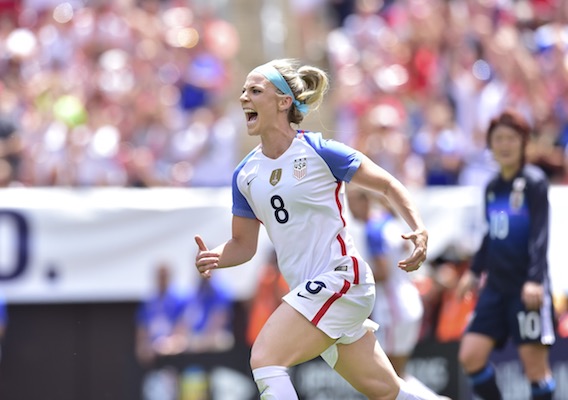 IN THE SECOND of a two-game series, the United States women’s national team defeated Japan 2-0 in a weather-shortened contest on Sunday afternoon in Cleveland.

Julie Johnston and Alex Morgan tallied for the Americans with Allie Long and Crystal Dunn providing the assists. Hope Solo also earned her 99th career shutout in the match. Inclement weather forced the teams to abandon the game 14 minutes early.

Since winning the 2015 World Cup, the U.S. women have compiled a remarkable record of 18-1-2. Even more impressive, they’ve beaten six of the world’s top 10 teams along the way, including victories over Germany, France, England, Brazil, Canada, and now Japan.

Contrasted with the build-up to the 2015 World Cup—in which the Yanks often appeared lethargic, one dimensional, and uninspiring—the Americans have looked bright, creative, and dominating in their lead-up to the 2016 Rio Olympics.

Criticized for its long-ball mentality in late 2014 and early 2015, the 2016 version of the U.S. women’s national team has created some of the best attacking moments in recent history. Against Japan, the combination leading to Morgan’s goal and the American’s 15-pass combination in Japan’s half in the 68th minute highlighted the U.S.’ new-found creativity.

Since last summer’s World Cup, Christen Press has scored an array of technically impressive goals for both club and country. However, she hasn’t had many opportunities for the U.S. in big games, often scoring late in matches when the U.S. has already secured a result.

On Sunday, Press received a rare start against a top team, but didn’t take full advantage of the opportunity. While she did provide the run and pass that should have resulted in a Tobin Heath goal in the 54th minute—Heath bungled the gilt-edged opportunity—Press also missed two great chances of her own in the first and 54th minutes of play.

With the U.S. playing a single-striker set since the World Cup and Morgan normally occupying that role, head coach Jill Ellis has most often used Press in the midfield—on Sunday she played as the team’s No. 10.

To win a job in the starting XI before Rio, Press will need to show she can put chances away in tight matches against top opponents.

For now, the U.S. women will head back to their National Women’s Soccer League clubs ahead of the next slate of international matches in early July. With only two months left before the Olympics, Ellis will be faced with a number of difficult roster decisions.

Netminders Alyssa Naeher and Ashlyn Harris—both having spectacular seasons with their respective clubs—are still in a battle for the second goalkeeper spot, but Ellis elected to give Solo the start in both games against Japan. In the back, Whitney Engen and Emily Sonnett are fighting for the third spot at center back—probably the most contested spot on the squad right now. Based on recent appearances for the U.S. and club form, Engen likely has a slight advantage.

At outside back, Kelley O’Hara has clearly taken over Ali Krieger’s starting position—Krieger has only started once in the last nine games for the U.S.—but both will make the squad. And in the midfield, Allie Long earned two starts this camp and appears—for now—to have supplanted Sam Mewis as the backup option at center mid.

The U.S. next returns to action against South Africa in Chicago on July 9 (1pm ET, FoxSports1).