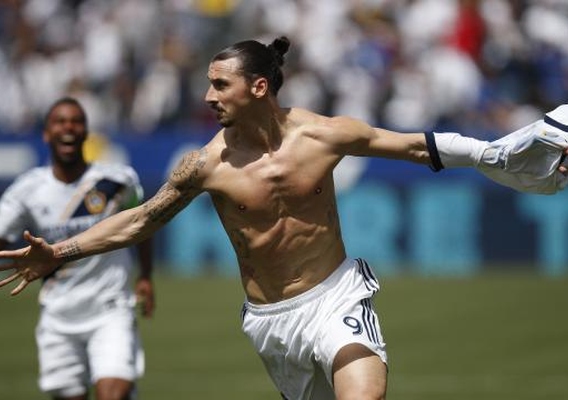 MLZ, high expectations in the Big Apple and more

When looking at the top stories from MLS this weekend, it is a no brainer where to start as Zlatan delivered beyond what anyone could have imagined for a debut performance. Elsewhere, things are looking good in the Big Apple but bad in nation's capital. Here are Brian Sciaretta's top 5 stories from Week 5.
BY Brian Sciaretta Posted
April 02, 2018
10:00 AM
IT WAS A BUSY EASTER weekend for Major League Soccer as all teams but one were in action on Friday night and Saturday. For one game alone it was a weekend that will be remembered for a long time.

With that said, here are my takeaways from a busy Saturday.

IT IS NOW MLZ


Saturday’s game between the LA Galaxy and LAFC might be the greatest regular season game in the history of MLS. The only game that comes close was the Red Bulls 5-4 thrilling win over the Galaxy in New Jersey in front of 66,000 fans on August 18, 2007. In that game David Beckham made his first start and played well, Landon Donovan was on his game, an 18 year old Jozy Altidore scored two goals, and Juan Pablo Angel had the game winner.

In this game, there was Zaltan being Zlatan and that’s all that what was needed.

In the first ever game between the LA Galaxy and LAFC, there were a lot of expectations for what was dubbed as the “El Traffico” derby. It started out, however, as one way traffic for LAFC and the architect was Carlos Vela who scored the first two goals – including an amazing goalzo.

With LAFC up 3-0, it looked like a laugher. But after the Galaxy pulled one back through Sebastian Lletget to make it 3-1, Zlatan Ibrahimovic entered and delivered one of the most iconic moments in the history of the league.

With the score now 3-2, the Swedish legend did this.

From there, it just seemed like only a matter of time before he would score a stoppage time winner – which he did.

“The fans were demanding something and I gave them Zlatan,” he said afterward.

It might just become his league soon – not just through his quality but also because of his personality. Just it back and enjoy the show.


Real Salt Lake visited Toronto on Friday night and Mike Petke’s team laid a complete egg in a 3-1 loss. Toronto did not even play well but should have won by more. The only thing that prevented a lopsided score was the ageless Nick Rimando in goal.

Real Salt Lake is just getting outworked in the midfield. Croatian newcomer Damir Kreilach and Kyle Beckerman are not helping with meaningful possession. Albert Rusnak is off to a slow start.

RSL has four points so far in large part because the Red Bulls were focused on the Champions League and FC Dallas is injured and struggling. But against teams that are playing at full-strength, the results have been ugly.


When at 100%, the Red Bulls boast a strong starting lineup. The problem is that the CONCACAF Champions League has forced Jesse Marsch to start “B” teams in MLS to start the year. The result has been entirely avoidable losses to Real Salt Lake and Orlando, on Saturday.

The CCL is fun but it is incredibly taxing on the teams that participate. After the tournament, the Red Bulls will be in a tough spot. Then the schedule will be condensed in August due to league games being moved.

If the Red Bulls can get past Chivas and advance to the final, however, it will be well worth it.


No team in MLS is hotter right now than NYCFC. On Saturday Patrick Vieira’s team walked out of San Jose with a 2-1 win.

The winning goal came from Anton Tinnerholm and on most weekends other than this one, it would be the MLS Goal of the Weekend.

Vieira and City Football Group have built a very good team built mostly on foreign players. But he has built a system that everyone is buying into and is getting important results. Even when David Villa is unable to play, NYCFC still plays well. Also in goal, Sean Johnson is playing about as well as he has in his entire career so far in 2018.


In an ideal world a team is ready to move into its new stadium with momentum and excitement. DC United, unfortunately, is heading into the complete opposite direction.

Yes, most of its games are on the road but two points through five games gives a bleak outlook. In particular, its defense has conceded 10 goals so far this season.

DC United has some good young players in Chris Durkin and Ian Harkes but has been stagnant in recent seasons. With it such an important time right now in the team’s history with a new stadium coming, it makes you wonder if Ben Olsen will be on the hot seat before too long.