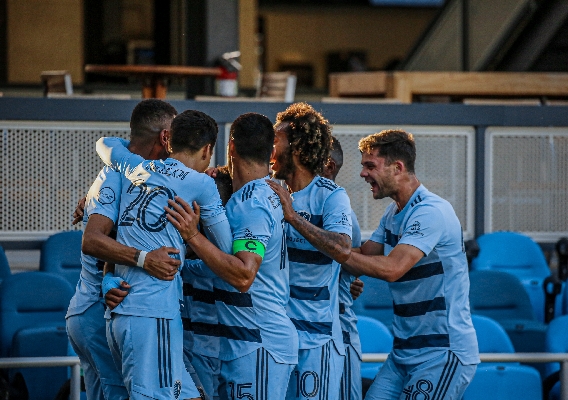 ASN's Brian Sciaretta takes you through the sixth week of the MLS season and offers up his observations with an American perspective.
BY Brian Sciaretta Posted
May 24, 2021
4:05 PM

WEEK SIX OF the 2021 MLS season was strange, Seattle didn’t win, Chicago and Cincinnati both won, and Chicharito didn’t score. On the flip side, the season is shaping up to be dominated by many familiar faces that fans have been following for years.

Here are my observations from the games of Week 6

The best team of the weekend was Sporting Kansas City which is playing with confidence and is controlling many aspects of the game. This was on display on Saturday in a 3-1 away win over San Jose Earthquakes. The team came into the game with a well-thought-out plan in terms of speeding the game up against San Jose and forcing them into rushed decisions and turnovers. In the end, Sporting deserved the win.

Alan Pulido, in my opinion, was the best player in the league this weekend. He’s the type of true-difference maker a contending team needs – and to go along with that, his supporting cast is strong.

Gianluca Busio, 19, continues to have a season where he is clearly becoming a very solid and important midfielder in this league. He’s playing well on both sides of the ball, generating opportunities, and winning his duels.

Busio seems like a player that seems like he has a very good chance to play his way onto the Gold Cup team this summer if he continues these types of efforts.

There are a bunch of 2001-born players who, at this moment, should be with the U.S. U-20 team at the World Cup but have lost out on that opportunity due to COVID. A few of these players might get to play in the Gold Cup instead – players include Busio, Tanner Tessmann, Leon Flach, Julian Araujo, George Bello.

Bello is also showing impressive growth this season and seems like the kind of player who can probably earn a transfer at the end of this season if he keeps it up. He’d have been a starter for multiple seasons for a good team while showing all-star caliber growth. Those are important boxes to check when making such a move – like Matt Miazga, Tyler Adams, Mark McKenzie, Brenden Aaronson, Tim Ream, and DeAndre Yedlin did before they left.

As for San Jose, the promising start is now history and this team continues to be up and down under Matias Almeyda. The streakiness is so extreme – looking like a contender one month, and looking like a mess the next. After a terrific start, Cade Cowell has struggled at bit. He’s extremely young and learning to fight through these things is critical.

It was always going to be a daunting task for the Red Bulls to deal with the season-ending injury to Aaron Long. Saturday’s game illustrated just how hard that is going to be for this team. At first, it seemed as if Andres Reyes looked up for the task when he scored his first goal in the league off a set piece delivered by Frankie Amaya.

But then Reyes lost it. He sent Matt Polster head-first into the side boards for a yellow card in the 31st minute. Eight minutes after that, he was sent off for a late tackle.

Andres Reyes.. what a wild performance for #RBNY filling in for Aaron Long: Goal in the 7th, rough yellow on Polster in the 31st where he sent him head first into side boards, sent off in the 39th.

With their hyper-intense pressing approach, the Red Bulls are never going to play well down a man. That played true to form as their 1-0 lead turned into a 3-1 loss. Overall, it was an easy win for New England which was able to play through the press, get Carles Gil the ball, and just eventually make the RBNY chase the game.

Trading away Tim Parker in the offseason is looking more and more like a bad move.  Reyes, Sean Nealis, and Amro Tarek are not an ideal contingent of central defenders. If RBNY wants to salvage its season, they’re gonna have to find a way to scrap by the next few games and then acquire more options either via a trade, a transfer, or via loan.

The Portland – LA Galaxy should have been a better game than it was. It actually started out well until the Galaxy’s Derrick Williams committed an absolutely horrific tackle on Andy Polo and was sent off (with a certain suspension looming) just before halftime. The second half was simply Portland methodically ripping the Galaxy apart 3-0. The man advantage helped Portland but so did the anger over the Williams incident. Portland channeled that anger usefully into a great performance.

This is a red card even by Cobra Kai standards. Good lord... pic.twitter.com/nZAqUPQ2vb

To any future Portland opponent: don’t anger the Timbers. This team will only use that to its benefit.

The big story for the Timbers is that Eryk Williamson is playing like an all-star and someone who should be inline for a Gold Cup spot. We know Valeri, Mora, and the Chara brothers can play. With Williamson playing at the level he’s currently at, Portland is going to be a tough team to break down.

This was the second game in a row where he’s played at a Team of the Week level (even if he didn’t get nominated this week). 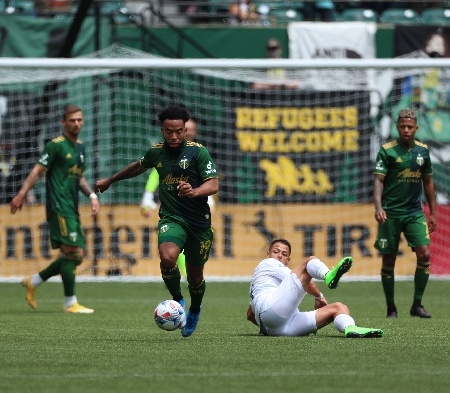 Williamson was one of a few terrible cuts from Jason Kreis for the U.S. U-23 team. That team fell short because it didn’t bring enough attacking midfielders and center forwards. Less than two months later, Williamson is looking like a Gold Cup option right now.

Atlanta is on the right track

The standings don’t necessarily reflect it, but I’m bullish on Atlanta United. They’re certainly not the dominant side from Tata Martino but the team is far more improved from the dreadful Frank de Boer era. To be fair to de Boer, the roster was also decimated from some poor decisions made by the front office and the fault is not entirely on him.

For Gabriel Heinze, turning the team around was never going to happen overnight. It was going to be a process and six weeks into the season, it’s gone well. Atlanta has lost just one game and has cut back on the poor performances. The final product and scoring touches still have a ways to go, but the team is getting results.

The classic stare down we love to see ???? pic.twitter.com/BkN0ZG6HKi

The effort and the heart are back in Atlanta and you have to think that eventually the goal scoring will improve. Josef Martinez is still getting back to fitness and form. By July or August, I think Martinez will be moving better and finishing better. I also think Atlanta will make some roster changes this summer as well. In the meantime, if they can continue to fight and claw to results, they’ll be in excellent shape.

In Sunday’s 1-1 road draw with Seattle, Atlanta flexed a bit of muscle heading across the country to earn a point from the best team in the league. Martinez scored Atlanta’s goal on a well-taken penalty.

But with each week, I see an Atlanta team that looks beatable but is a team no one will want to play come the end of the season.

Philadelphia claws out a win

It is not easy for a team to lose two Best XI players during an offseason and begin a current season with just one designated player – and still remain highly competitive. Philadelphia is doing that and it is a testament to just how well the club is being run right now.

Saturday night’s 1-0 win over DC United wasn’t a great game, but it was effective from Philadelphia who scored the game’s only goal on a lovely play from Jamiro Monteiro to feed striker Kacper Przyby?ko. Combined with effective central midfield play from Alejandro Bedoya and Leon Flach, Philadelphia was able to score its goal and see out the victory.

That timing. That ball.

It will be interesting come the playoffs where the results are often dictated by elite designated players as opposed to simply having a very competent team. It’s part of the reason why Philadelphia failed in the playoffs last season after winning the Supporters Shield. You need a good team along with players like Lodeiro, Almiron, Giovinco, Vela, or Zelarayan to win in the playoffs. Is Monteiro that guy?

As for DC United? There just isn’t a lot there right now. Sure, they can eek out a win here and there but every result takes a massive effort. Hernana Losada has his work cut out from him and it will be interesting if he can be flexible with his approach.

The youth movement rolls on in the league and all eyes are on the class of 2003. We’ve seen promising performances from players like Caden Clark, Cade Cowell, Ricardo Pepi, Kevin Paredes, Dante Sealy, Moses Nyeman and debuts from players like Patrick Weah and Jack McGlynn. All of these players will deal with consistency issues, which is normal. Lately, Cade Cowell has struggled with San Jose.

This past week, Brian Gutierrez has been the latest member of this birth year to flex his muscle and the midfielder did an outstanding job helping Chicago earn their first win of the season against Inter Miami on Saturday.

Caden Clark, meanwhile, played pretty well for the Red Bulls but was let down by the Reyes red card. Being reduced to 10 players limited everyone on the team from being effective.

Kevin Paredes had the best moment of the game for DC United in its loss when he got past Leon Flach before narrowly missing with his shot.

Among the 2002-birth year, George Bello along with Gianluca Busio (as mentioned above) are the best in the league. With 515 minutes on the season (five starts, six appearances, in six weeks), Bello is getting valuable minutes and looks like he is finally back on track as a top prospect. It wouldn’t surprise me if he earns a Gold Cup call-up.

Bello's numbers in the 1-1 draw against Seattle were impressive against the best team in the league:

Among the 2001-birth year, it remains frustrating times as this week would have seen the opening of the U-20 World Cup. One of the best players from that class in the league, Aiden Morris, is done for the season. We’ve continued to see progress from players such as Tanner Tessmann, Cole Bassett, and Julian Araujo – who all would have been on the team. Cameron Harper, meanwhile, is still only a substitute for the New York Red Bulls and that is largely due to the fact the Red Bulls typically don’t play with wingers. That leaves Harper as a late offensive sub when he’s given freedom to simply make plays happen.

Leon Flach, meanwhile, looks very ready to take big strides this season with Philadelphia. The versatile central midfielder has been a big part of Philadelphia remaining competitive after selling off top-players last season.