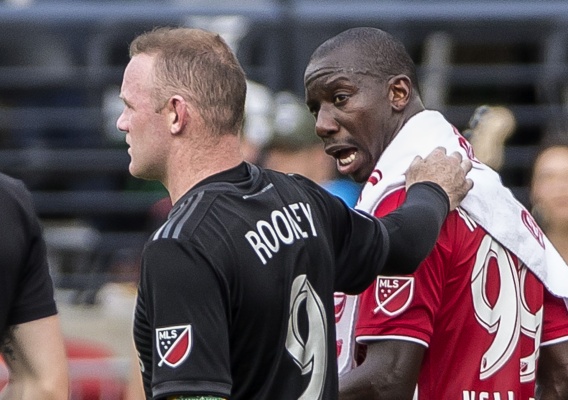 Zlatan is good but even he can't distract the mess that is the LA Galaxy. The DC United - RBNY rivalry lived up to its billing and had a nice American edge to it. Also, how is MLS doing this season to prepare players for youth national teams?
BY Brian Sciaretta Posted
September 17, 2018
10:00 AM
WHAT TO MAKE of the 29th week of the 2018 MLS season? A lot of things actually went as expected. In a league that is known for its unpredictability, this was among the most predictable of weeks.

All those things lived up to billing.

But here are some deeper thoughts from the weekend.


Let’s get this out of the way: Zlatan Ibrahiovic isn’t just a great soccer player, he’s a great entertainer. It’s almost as much fun to listen to what he’s going to say after he does something great than it is watching him actually do something great. This weekend was no different as his 500th career goal was marvelous as was his postgame statements.

But what’s funny is what people weren’t talking about? That Toronto won the game 5-3. That the Galaxy are a terrible team right now and a front office with no vision. It’s a team that has conceded five or more goals in three out of its last four games. This team needs an overhaul and has needed one for quite some time.

Zlatan is isn’t the first big name to play in Los Angeles but when players like Beckham, Donovan, and Keane were there, they fit into a plan. Zlatan was the equivalent of lipstick on a pig. He was masking a much bigger problem. The Galaxy’s problem is so big that even the presence of Zlatan can’t cover it up anymore – and that is big.

The problem is that even with the likely upcoming overhaul, it won’t mean anything unless the people making the moves have a vision. If they don’t, then any overhaul needs to start with them.

As for Toronto, the win was nice but they playoffs are almost certainly out of reach with Montreal winning over the weekend. As for what gets done with players like Altidore, Giovinco, and Bradley, it will be telling. They delivered a title last year but keeping all three players could commit them to an aging core – at a time when success in the league mostly revolves around younger designated players and a strong academy.


The DC United – Red Bulls thriller was terrific for so many reasons. The obvious is that it was just a good game that was exciting to the end. But it also featured the league’s oldest rivalry and was a game that was important to both teams in the standings. DC United is trying to make a surge into the playoffs and the Red Bulls are trying to win the Supporters Shield or clinch a first-round playoff bye.

What happened in this game is simple. DC United took a lead three different times and Bradley Wright-Phillips equalized every single time. Wright-Phillips is just a magnificent player in this league and he clearly took a lot from his relationship with Thierry Henry in the early days of his time with the Red Bulls.

There was good and bad news for American fans in this game. Paul Arriola was dangerous for DC United and scored the opening goal on a very nice finish. In his career, his weakness was always that he did so much right but his final ball was missing. It really has improved a lot this year.

Russell Canouse was good again for DC United and he should be nearing a U.S. call-up in central defense. Tyler Adams was his steady and consistent self.

Unfortunately for the Red Bulls, the central defense tandem of Aaron Long and Tim Parker had possibly its worst game of the season. There was simply too much open space in the box for DC United and it cost the Red Bulls a victory.


The Seattle Sounders are just plowing through the Western Conference right now and there is no stopping them. During its streak, Seattle has defeated many of the league’s top teams including Dallas and New York City FC.

The latest victim was the Vancouver Whitecaps which Seattle defeated 2-1 on the road. Was Seattle dominant? No. But did it do the things right that it will need to make a run in the playoffs? Absolutely. Seattle controlled the midfield and did not make many mistakes.

The acquisition of Peru national team forward Raul Ruidiaz has been a difference maker and his two goals were all that the team needed. Combined with Sefan Frei, who should be in the conversation for goalkeeper of the year, then Seattle is indeed a threat to continue to win.

A look at youth


There is no question that the league has had a better year than 2017 in terms of getting young domestic players on the field. In addition, the league will sell Alphonso Davies and Tyler Adams to the Bundesliga once the season is over.

But getting players on the field is only half the story. Young players are not necessarily going to ever turn into good players. The question is whether or not the young players MLS is focusing on are looking like they will be serious contributors in the future.

FC Dallas right back Reggie Cannon and Philadelphia central defender Auston Trusty are without a doubt having break out years. It is coming at a good time for both as both players turned 20 over the summer and both should start for the United States U-23 team for qualifying and perhaps the Olympics as well.

Of course, Real Salt Lake could be a big factor in the U-23 Olympic qualifying team Justen Glad, Sebastian Saucedo, Brooks Lennon, Danny Acosta, and Angel Herrera. While Acosta, Herrera, and Saucedo will all finish around 1000 minutes this year, next year will be a turning point. Lennon and Glad will have very high expectations in 2019.

Also in the U-23 pool, Djordje Mihailovic is starting for a bad Chicago Fire team but is getting sharper after returning from a long absence following ACL surgery.
Colorado midfielder Cole Bassett, 17, should factor into the 2021 U-20 cycle and made his second appearance of the year. In the same boat, New England’s Isaac Angking also made his second appearance of the year for New England in a 1-1 draw against LAFC.

Gianluca Busio looked sharp in his seven minutes off the bench and he is a starter for the United States U-17 team. George Bello could get more time down the stretch too.

The most interesting question right now is how are the U-20 players in MLS looking ahead of World Cup qualifying?

The answer is pretty good. Tyler Adam is the jewel of the age-group and probably won’t play for the U-20 team. Despite him, Philadelphia Union central defender Mark McKenzie has played around 1200 minutes this year and Chris Durkin is nearing 1400 minutes.

James Sands was very strong for NYCFC and he should play quite a bit down the stretch. Still the lack of playing time for the U-20 team’s biggest domestic playmakers in Dallas’ Paxton Pomykal and Atlanta’s Andrew Carleton continues to be a disappointment for the U-20 player pool.

For Tab Ramos, he will have a lot of players from MLS that have earned occasional first team minutes but not many who have earned over 1000 first team minutes in a season. Most of the players will have a few hundred minutes and spordic appearances like Anthony Fontana, Jaylin Lindsey, Matthew Real, Paxton Pomykal, Andrew Carleton, and  James Sands. When compared to other leagues, that is somewhat normal but wtih a few players, it feels like it should be better.