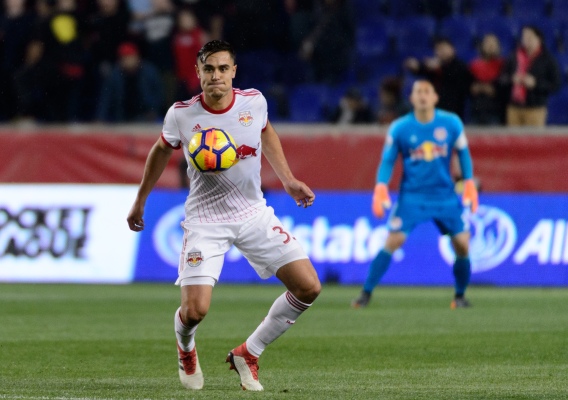 Looking back MLS games from Week 26, there are some interesting stories brewing in Philadelphia and Seattle while Aaron Long and Josef Martinez shined on an individual basis. One thing that remains ugly, however, is American goals scoring in the league
BY Brian Sciaretta Posted
August 27, 2018
4:00 AM
WITH WEEK 26 of the 2018 Major League Soccer season now in this history books, there is a lot to talk about both good and bad. Josef Martinez has been a treat for the league, Aaron Long’s rise has been important, but American goal scoring domestically has been terrible.

Here are five stories that caught my eye.


It has been one of the worst weeks ever for scoring among American players eligible for the United States national team. Since last Wednesday’s Hudson River Derby, there have been 12 games in MLS with a total of 31 goals scored. Just one of these goals was scored by an American player eligible for the U.S. national team – that was Corey Baird in Real Salt Lake’s 6-0 win over Colorado on Saturday.

That is a brutal stat that must improve in the years ahead if the league wants to claim it is doing something to advance American and Canadian soccer. Of course there are good American players in MLS but right now Designated Players and TAM players just serve as a barrier for American players at those positions since teams just buy ready-made attacking talent.

And that is not to say that it isn’t worth it to bring in quality attacking players from South America or Europe. Those players can raise the bar for the league’s quality. But there are a lot of minutes to go around and beyond starters, backups also tend to be imports among attacking positions.


Josef Martinez broke the single season scoring record on Friday night with his 28th goal of the year in a 2-1 win over hapless Orlando.

It is a significant achievement for Martinez, 25, who has been extraordinary in helping to lift Atlanta this year as the Supporters Shield favorites. The interesting part will come when serious offers come into Atlanta. What will Atlanta’s sale price be?

Martinez will likely remain in Atlanta through the end of the season but what happens if a major offer comes in this week? Atlanta is a very popular team with an enormous draw at the gate. Martinez is a huge part of that and it would take a huge offer to essentially end the team’s realistic title hopes.

Then whenever Martinez does make the jump, how will he do? His success is an important part of opening up market for MLS players.


The United States national team roster won’t be known for another week but it looks like Red Bulls head coach Chris Armas spilled the beans on Aaron Long after the Red Bulls defeated DC United 1-0 on Sunday night.


“You talk about Aaron Long, we’ve seen the quality for all the years and I think on the outside even now with his national team call up, you’ll see this guy is a big time player” #USMNT #RBNY Armas spilled the beans

On Monday, word got out via the Red Bulls that Long was only on the preliminary roster and that no decision was made as to him being officially called up by U.S. interim head coach Dave Sarachan.

If he actually makes the final roster, Long went out and earned it. He has been one of the league’s best defenders this past year and is playing well week in and week out. Tomorrow ASN hopes to outline the USMNT central defense depth chart but the bottom line is that so many players are uncertain right now (Brooks is injured and several other players are out on loan, clouding their ability to get regular minutes).

Fellow Red Bull Tim Parker has established himself over several years but there is certainly room for Long. Calling up players who are playing well, as opposed to by reputation, is a healthy way to start a new cycle. Whether or not Long emerges as a USMNT regular, he deserves a look. Anyone who has watched him this year can tell you that.


What are the secrets behind Seattle’s seven game winning streak? Once left for dead this year, Seattle’s streak has seen it surge into the playoff positions at fifth place and Sunday’s 1-0 road win over Portland also knocked the hated Timbers out of the playoff positions. Combined with the fact that Seattle has played two fewer games than fourth place Real Salt Lake, the team might not be finished climbing.

So what has made Seattle go from bad to excellent over such a short period of time?

The main answer is that its defensive style has frustrated its opponents to no end. Opponents have scored just three goals against Seattle during the past seven games and no opponent has scored multiple goals.

Brian Schmetzer’s team has been remarkably disciplines both tactically as a unit and on individual levels. They press opponents early and often to prevent any sort of rhythm. Whenever needed, Stefan Frei is there to make a big save.

This is not the offensive-oriented Seattle Sounders teams of the past but without Dempsey or Morris, they are finding a way to win. A tough schedule awaits but at this point you have to like Seattle’s chances.


If you were to consider who has been the coach of the year in MLS up to this point, Jim Curtin would be near the top of anyone’s list. He might even win it if Philadelphia make the playoffs. Expectations were rock bottom heading into the season but Curtin has found a way to mold this team into a winner.

That is actually remarkable when you stop and consider that David Accam and CJ Sapong have combined for four goals this year. Heading into this season, it seemed like Philadelphia had only a slim chance at the playoffs and if it was to make it, it would need massive production from Accam and Sapong. But Philadelphia is in fifth place with virtually no production from its impact forwards. No one saw that scenario coming.

Saturday’s 1-0 win over New England was its third win in a row and second consecutive shutout. This game wasn’t as convincing as the 2-0 win over New York City the week before but Philadelphia was able to win ugly – which any good team will have to do.

Curtin has played to this team’s strengths. Auston Trusty continues to be an impressive force on the backline and Keegan Rosenberry has had a critical rebound season. Of course, Andre Blake remains one of the tops in the league