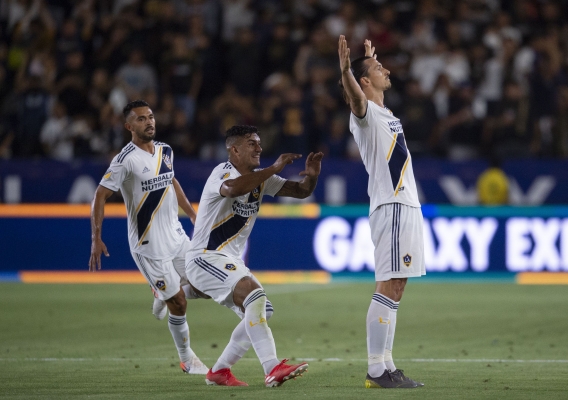 The 20th week in MLS is now over and Zlatan is sucking the oxygen out of the room - which is by design. But even looking beyond that, there is a lot ot talk about. Including the Red Bulls lucking out, Brian Fernandez's dominance, the turnarounds in San Jose and New England, and another solid youth report.
BY Brian Sciaretta Posted
July 22, 2019
7:00 AM
THE 20th WEEK of the 2019 MLS season is history and everyone knows what the top story is. But lost in the mix is a revealing weekend across the board.

With that in mind, here is a look at the top stories from he weekend.

Zlatan creates the stage and delivers

When looking at the top stories of the weekend in MLS, there is Zlatan and everything else. Nothing is close to the Swede’s performance in a game that took on added meaning due to his antics in the days leading up to it.

Everyone knows by now what happened. In the days leading up to the game, Ibrahimovi? called out everyone and everything else in interviews – including the league, Los Angeles FC, and Carlos Vela. There was the “Ferrari and Fiats” quote, the knock on the importance of the regular season (made amusing by the fact the Galaxy didn’t qualify for the playoffs last year), and pretty much everything else.

All that created the stage and it was followed by Zlatan delivering his best performance since joining Galaxy. A hat trick for a 3-2 against the league’s best team and crosstown rival. When all the talk in the city has been shifting from the Galaxy to the upstart LAFC in just their second season. This performance brought all the talk back to the Galaxy for a change.

As for his comments in the days preceding the game, it is both interesting and entertaining. MLS remains different in many ways. While still improving, it remains behind the big leagues in Europe. The league should always be questioning itself and ways to continue to move forward and there is truth to some of what Zlatan says regarding the restraints on spending.

But this has also been part of Zlatan’s character for nearly two decades. He can belittle others to make himself seem bigger - like Muhammad Ali. It adds to his entertainment value but the fact he can back it up on the field is remarkable. Carlos Vela actually scored two goals for LAFC on Friday but never before has a two-goal performance seemed so small. It made the rest of the weekend in league seem small.

There is plenty of concern about the Galaxy at the moment. Beyond Zlatan, the Galaxy remain a very underwhelming team. But can Zlatan be enough? After Friday, a large amount of people will be paying attention.


On Saturday night, FC Dallas travelled north and beat Sporting Kansas City 2-0. It really summed up the story of both team’s very well so far in 2019. Dallas is a team that plays a lot of young kids and generally gets pretty good results. Just when they seem to be fading, Luchi Gonzalez gets his kids to deliver an important result.

Meanwhile, Sporting Kansas City is a more veteran team that has been struggling for most of the season. Every now and then Sporting looks like it is turning things around only to drop a bad loss and dip further below the playoff line.

This was that result for both teams. Sporting actually controlled possession for long stretches but couldn’t generate much. Playing without star young playmaker Paxton Pomykal, Dallas did well with the opportunities it had, played solid defense, and walked away with three points and a cleansheet victory.

Jesus Ferreira got on the board after a few weeks of hitting a rut. He actually played further back into his father’s old No. 10 role and looked decent. His goal was his sixth of the season and it will be a great season if he can hit double digits. His American citizenship is coming (and one source has told ASN he has his citizenship but is simply now applying with FIFA for his residence waiver so he can play for the U.S. team – mostly likely at the U-23 level) and when he does, he will be an interesting prospect for the Olympic team.

As for missing Pomykal, Dallas clearly struggles without him and will have a tough time down the stretch if he remains out. He is likely going to get sold within a year but if the sale is this summer, Dallas should hope that he is loaned back because having him, and an in-form Ferreira, are key to the team’s success.

As for Sporting Kansas City, the backline is old and mistake-prone. This has been the case for awhile but improvements have not come. Sporting needs to add fullbacks and gradually reshape the backline and defensive midfield. Right now, there are too many better teams in the West to think Sporting has any legitimate postseason hopes without any serious changes.


It was a great weekend for Atlanta United witch destroyed Houston 5-0 midweek and snuck past DC United 2-0 thanks to two late goals. It is such a different Atlanta team than the free-flowing one that captivated the league’s fans in 2018 under Tata Martino.

It’s ridged and structured but can achieve results. Right now, the team is winning on talent and having a high number of players that can do things that most players in the league can’t do. This is not the Red Bulls who have a system and can win with it while playing a variety of players who don’t pass the eye test – Sean Davis, Alex Muyl, Brian White, etc.

Atlanta just overwhelmed a Rooney-less DC United on sheer talent while also playing at home. It will be interesting to watch Atlanta if it has to go on the road in the playoffs.

Revs in a playoff hunt


Let’s face it, no one thought the Revolution were going to be in a realistic playoff hunt in 2019 at the start of the season under Brad Friedel. Even when Bruce Arena came in, it seemed unlikely. But the 2-0 win over lowly Cincinnati did the trick and it sits in seventh place.

It is interesting to see Bruce Arena once again come in and help a club in trouble. Right now, the team is unbeaten in 10 and is actually playing with confidence and momentum. Players know what they need to do.

And the Bruce Arena-era is still getting warmed up. Over time, Arena is going to want bring in his own players and according to reports, get the Krafts to open up their wallet. But right now he is getting the most out of this team. It is still going to be tough for the Revs to make the postseason given a tough remaining schedule but it seems unwise to bet against Arena in this league.

It does make you think about Brad Friedel and his disastrous spell running the team. The former U.S. national team legend simply was not able to connect with players the way Arena has.


There is no other way to describe the Red Bulls 1-0 win over Orlando other than it took a lot of luck. Orlando dominated the second half but was denied by woodwork and Luis Robles. The difference was a marvelous pass from Kaku and a classy finish from Brian White – who know has seven goals in under 1100 minutes. That’s great production from the New Jersey native and one that could get him a U.S. national team January camp call-up.

Looking ahead in the schedule, the Red Bulls can go either way. There are some really tough games in there but a lot of winnable ones. But which team will show up? There is no way the team should get overrun the way it did against Atlanta.

The Red Bulls remain the trickiest team to figure out. A 4-0 loss to Houston and being outplayed vs. Orlando are troubling. But last week’s win over NYCFC showed that the team can take it to other teams.

Fernandez has been huge


Expensive forwards who can ruthlessly finish are expensive but in this league, they can transform a team’s fortune rather quickly. If it wasn’t for Zlatan, every MLS discussion would center around Brian Fernandez right now. The Argentine forward has carried his remarkable run with Necaxa into Portland where he now has eight goals in 682 minutes. His last two came on Sunday in a 2-1 road win over archrival Seattle.

Portland quickly retakes the lead as their new star does it again. That's 11 goals in 12 games for Fernandez. #SEAvPOR pic.twitter.com/QHWyKScrOz

Fernandez is playing so well that it is hard to see him in the league very long. His play might convince European teams that his personal issues are behind him and that he is worth the investment. He’s that good that he could follow the Miguel Almiron route – although the bar will be higher given his past.

Right now, Portland is still out of the playoff places but it should only be a matter of time before that changes.


A total of 30 players eligible for U.S. youth national teams played in the 12 MLS games over the weekend. That is a good number considering several of the players had solid performances


From this list, there were several key performances. Brendan Aaronson had a significantly improved performance for Philadelphia from the one he had the previous weekend against Real Salt Lake. Brandon Servania remains a very impressive potential No. 6 and was strong once again for FC Dallas. Jackson Yueill continues to boost a powerful San Jose offense.


All the talk in LA is on Zaltan, but Julian Araujo put in a nice showing at right midfield for the Galaxy and it this assist on Zlatan’s sensational opening goal.


Zlatan will rightfully get a ton of praise for this spectacular goal but what a nice assist from #USYNT right back Julian Araujo pic.twitter.com/vPK9weUoFk

Sebastian Aaronson, 16, is not part of the U.S. U-17 pool and it will be interesting if he gets into the picture after earning a lot of minutes for Colorado. On Saturday the homegrown had a bipolar performance where he scored his first ever pro goal and was later sent off with his first ever straight red.


Congratulations to 16 year old Sebastian Anderson for scoring his first pro goal for the Colorado Rapids. What a run by Jonathan Lewis to set it up pic.twitter.com/kiYnX6Bvto

On the flip side, Djordje Mihailovic might be hitting a rough patch – which is natural playing for as bad of a team as Chicago currently is. The same could be said for Gedion Zalalem who is not generating enough offense for Sporting Kanas City.

Under the radar lies Frankie Amaya who is working extremely hard for the worst team in the league in Cincinnati.

The bottom line is that if you had to make a U.S. U-23 team of domestic players, it would be solid. Much better than the two previous cycles.