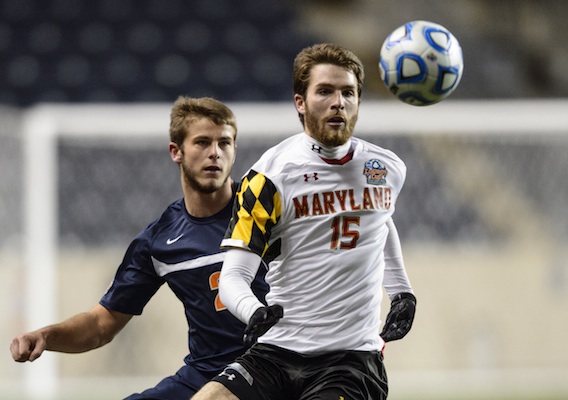 Major League Soccer's eventful offseason continues this Thursday in Philadelphia with the 2014 MLS SuperDraft. In his first assignment for ASN, Brendan Doherty looks at the draft's top talents.
BY Brendan Doherty Posted
January 13, 2014
3:17 PM
MAJOR LEAGUE SOCCER made headlines last week with Toronto FC’s high-profile signings of Michael Bradley and Jermaine Defoe, and we suspect at least a few more U.S. national team players are likely to join—or rejoin—the league before the 2014 season begins on March 8. In the meantime, all 19 clubs will look to add some lesser-known talent at the 2014 MLS SuperDraft, which kicks off Thursday at the Philadelphia Convention Center. MLS has eliminated the separate Supplemental Draft that took place the week after the SuperDraft last year. Instead the league has opted to add two additional rounds to the SuperDraft, for a total of four. The third and fourth rounds will be held on January 21 giving teams a few days to re-evaluate their needs and the remaining available players. Though this draft doesn't have the star appeal of 2013's No. 1 overall pick, Andrew Farrell, or 2011's No. 2 pick, Darlington Nagbe, there are plenty of quality players available. Over the past few years, MLS teams have signed a lot of the best young talent in the country to homegrown player deals, removing potential seniors and GA players from this year's draft. Even with a number of top prospects no longer available, this draft class has value—especially for teams looking to fill out depth in defense. As part of Monday morning's trade that sent defender Michael Parkhurst's rights from the New England Revolution to the Columbus Crew, the Revs now take over the fourth overall pick in the draft, their third pick of the first round. Here’s the draft order: 1. D.C. United
2. Philadelphia Union (from Chivas USA)
3. Vancouver Whitecaps (from Toronto)
4. New England Revolution (from Columbus)
5. FC Dallas
6. Philadelphia Union
7. Vancouver Whitecaps
8. Chicago Fire
9. San Jose Earthquakes
10. Montreal Impact
11. Colorado Rapids
12. New England Revolution
13. Seattle Sounders FC
14. Los Angeles Galaxy
15. Toronto FC (From New York)
16. Houston Dynamo
17. Portland Timbers
18. Real Salt Lake
19. New England Revolution (from Kansas City) And here are 15 names to know ahead of the draft.

Goalkeeper; 23 years old; Univ. of Connecticut
Blake, the consensus No. 1 goalkeeper in this year's draft, has displayed remarkable consistency over his three seasons in college, racking up 37 shutouts in 68 starts with a sparkling 0.57 goals against average. In addition to his six-foot-four frame, Blake has the talent and determination to challenge for a starting spot at a number of MLS clubs. "My first challenge is to try to get on a team, win the No. 1 spot,” Blake told MLSSoccer.com. “Play some very good soccer. Make my name in MLS and take it from there." A Generation adidas (GA) player, the Jamaican shotstopper's contract will not count against the MLS salary cap, making him one of the more attractive goalkeepers to come through the SuperDraft in several years.

Central defender; 22 years old; Univ. of California, Berkeley
Rebounding from an injury-plagued junior year, Birnbaum took his game to a higher level in 2013, scoring 10 goals in 19 starts despite playing defense. A veteran of four full seasons at Cal, two of which he served as captain, Birnbaum also has experience with both the U-18 and U-20 U.S. national teams. Birnbaum honed his leadership skills under Cal head coach Kevin Grimes: “I’m at the coaches’ office a lot watching film, going over film with them and talking about strategies for games,” the 22-year-old told the Daily Californian back in October. As a converted midfielder, Birnbaum is comfortable with the ball at his feet and has shown a strong aerial ability. Despite counting against the salary cap, Birnbaum offers a more immediate return than other top defensive prospects and will be a top pick on Thursday.

Central defender; 20 years old; Univ. of California, Berkeley
In a rare occurrence, the two top defensive prospects were college teammates and partners in central defense. At six-foot-three and 198 pounds, Dean is a physically impressive left-footed central defender who started 55 games across three seasons at Cal. While in college Dean converted from a left back to the middle of defense but it remains unclear where MLS scouts see his future. Dean started the MLS Combine playing as a fullback and was noticeably uneasy playing on the left side before switching to center back in Sunday's match. Afterward Dean told MLSsoccer.com that he was “a lot more comfortable” playing in the middle. While his positional sense is stronger in the middle, Dean has not yet shown the strength in aerial challenges necessary to succeed in the middle at the MLS level.

Midfielder/Forward; 22 years old; Georgetown Univ.
Neumann's detractors criticize his lack of athleticism but the Georgetown star's ability to read the play and pick out his teammates have more than made up for it thus far in his career. Speaking to MLSsoccer.com in December 2012, Neumann addressed comparisons between himself and a certain MLS star: “I was really impressed by Graham Zusi and the way he was able to play in the hole and connect with his forwards while scoring some goals," Neumann said. "I think he’s been a good role model in terms of the way he plays for me to get a sense of how I want to play.” Will Neumann's soccer brain and knack for playmaking carry over to MLS or will the lack of a nailed-down position keep the hybrid attacker from succeeding on the next level?

Forward; 21 years old; Univ. of Maryland
Mullins has been a major talking point of the 2014 draft class. The six-foot-one forward from Maryland has been prolific at the college level, netting 36 goals and 18 assists in the past two seasons, but question marks abound as to his best position for MLS. The answer to that wholly depends on which team is considering Mullins, but as the best natural striker in the draft class, he's worth more than a passing glance. Teams that line-up with two center forwards might pull the trigger on a trade in order to grab the back-to-back Hermann Trophy winner before he's gone.

Central defender; 20 years old; Univ. of Wisconsin
Another GA defender, Cochran has considerable experience with the U.S. U-20 national team program, is powerful in the air, and developed in the same St. Louis area youth club as Bolton Wanderers' Tim Ream. Though Cochran may not be the most pro-ready central defender, given his youth and occasionally sloppy passing, his GA status would allow a club to take its time integrating Cochran into its system to reap the full rewards of his potential.

Forward; 21 years old; Univ. of Maryland
Terps attacker Schillo Tshuma has something that cannot be taught—blazing speed—and this attribute alone could translate into a top 10 pick. Though a raw talent, experts see Tshuma evolving into a player along the lines of Chicago Fire’s Patrick Nyarko. The Zimbabwe native is another GA athlete, and even though he will count against a team’s international player allotment, his high upside is sure to draw attention.

Central Midfielder; 23 years old; Coastal Carolina Univ.
Pedro Ribeiro is a large presence in the center of the field and yet the six-foot-four midfielder is surprisingly smooth on the ball. His size gives him an advantage winning back the ball or riding opposition challenges while trying to pull the strings behind his forward teammates. Ribeiro, born in Brazil, will count as an international player but his technical ability on the ball may be worth burning an international slot for a rookie.

Midfielder; 19 years old; Louisville Univ.
Marlon Hairston is another GA player whose stock is largely improved because of that contract. MLSSoccer.com ran a short story about how Hairston, a U.S. youth international, was the only player to rank in the top 10 in all three physical test categories at the MLS Player Combine—speed, agility, and vertical jump. Hairston brings pace, attacking intent, and youth to the SuperDraft and would do well personally to learn from a veteran attack-minded central midfielder in the 2014 season.

Central defense; 22 years old; Michigan State Univ.
Cope may not have the imposing size or flash of more highly touted central defenders (he stands six-foot-one and weighs 175 pounds), but the Michigan State senior seems to possess the necessary traits to develop into a solid MLS defender—positioning, tackling, calmness on the ball, and work ethic. Cope was named the 2012 USL-PDL Defender of the Year for his play with the club Michigan Bucks, and the hard-working defender might impress a coaching staff during pre-season training if given the chance.

Left back; 22 years old; South Florida Univ.
Ben Sweat is the best natural left back in the draft class and has shown a strong work ethic through his career at South Florida. College soccer experts have touted the physical aspects of Sweat's game, notably his tendency to get forward quickly on overlapping runs; his defensive skills still need work, however. If Sweat uses the combine to show scouts how well he can defend, his previous attacking exploits should parlay into a first round selection for the Florida native, especially to a team lacking depth at fullback.

Central defense; 22 years old; Univ. of New Mexico
Venter is a center back who seems to have both the ability and the makeup to make an impact in MLS. The six-foot-three defender has been garnering MLS attention for a couple years now, mostly because of his ability to dominate aerial challenges. Venter’s strong work ethic and on-field leadership bode well for the team that calls his name on Thursday.

Right back; 20 years old; Creighton Univ.
Eric Miller is the highest-rated right back in the draft class and draws higher overall ratings than Sweat. The versatile defender, who signed a GA deal earlier this month, has experience with the U.S. team that competed in the 2013 U-20 CONCACAF Championship and the U-20 World Cup, though he was behind DeAndre Yedlin at right back and Wil Trapp at defensive midfielder. Miller can develop into an MLS-quality right back or a defensive central midfielder, especially if he is selected by a team that prefers fullbacks with attacking intent.

Defensive Midfielder; 21 years old; Wake Forest Univ.
Jared Watts may be the best defensive midfielder in the 2014 draft class. The Wake Forest senior also projects well as a central defender, but with so many natural center backs in this draft, it'd be odd for a team to select Watts with the intention of playing him out of position. Watts had forays into the attacking area in a more box-to-box role during his four collegiate seasons, and his goals barely outnumber his red cards over that time (five to four). Watts could benefit from an experienced coach who can instill discipline to his gritty style of play.

Defender; 20 years old; Univ. of Hartford
The last player signed to a Generation adidas contract, Jamaican defender Damion Lowe is definitely a guy betting on his potential and not just on the merits of his collegiate career. Despite his time with the Jamaica U-20 national team, Lowe played in a weaker conference in college and may depend on his GA-status not to drop into the second round. Projecting equally well as a center back and a fullback, Lowe could develop into a quality MLS defender over time. Which of these players are you most excited to see in Major League Soccer? Is there a star or two amid this draft? Share your thoughts below. This is Brendan Doherty's first article for American Soccer Now. Follow him on Twitter.