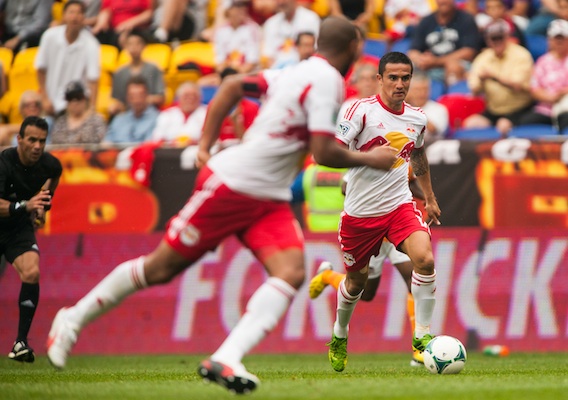 Will Mike Magee repeat as league MVP? Can the New York Red Bulls give Thierry Henry a nice going-away present? We asked five ASN regulars to share their predictions for the 2014 season.
BY John Godfrey Posted
March 08, 2014
11:37 AM
WE ASKED SOME KEY American Soccer Now contributors to share their predictions for the 2014 Major League Soccer season, and they were happy to oblige. Mike Magee and Robbie Keane both earned nods from our panel of soccer fanatics; the Portland Timbers and Los Angeles Galaxy will be facing high expectations this season; and the five different rookie of the year choices all provide food for thought. Read what our crew had to say and then tell us which players and teams you think will prosper this season.

GOLDEN BOOT
Jack McInerney—The Union kid will learn from last season's second-half slump and keep his scoring up all season. ROOKIE OF THE YEAR
Tommy Thompson—The Earthquakes' homegrown signing is a perfect complement to the physicality of San Jose's big bruising forwards, but he has enough bite to pair well with Chris Wondolowski. He should get plenty of playing time and the goals should follow. DEFENDER OF THE YEAR
Chris Schuler—After missing regular season time with an injury last year, Schuler shined in the playoffs and was as good as any defender in MLS. If he stays healthy and keeps last year's form for an entire season, the big center back should get the DOY honor. MLS MVP
Darlington Nagbe—With the skill Portland has added, Nagbe will have teammates to help him shine—and vice versa—and opposing defenses won't be able to focus on just him. SUPPORTERS SHIELD WINNER
Sporting Kansas City—The reigning champs come into the season with cohesion and confidence that will allow them to get off to a strong start. The club also has the necessary depth to let them ride out the World Cup duty absences of Matt Besler and Graham Zusi. MLS CUP CHAMPION
Portland Timbers—By the end of his second season Caleb Porter will have figured out what works in MLS and have the Timbers rarin' to go in the playoffs. The skill players he's added this offseason will help, too.

GOLDEN BOOT
Jermain Defoe—He'll be so thrilled at finally being someone's first-choice striker, he'll explode with goals. ROOKIE OF THE YEAR
Jordan Allen—His versatility should see him get plenty of minutes at Real Salt Lake. DEFENDER OF THE YEAR
Chris Klute—I'm on the Chris Klute bandwagon and I refuse to get off. Great mix of defensive awareness and attacking instinct. MLS MVP
Clint Dempsey—Because I'm an optimist. SUPPORTERS SHIELD WINNER
Portland Timbers—The Timbers won the west in 2013, only missing out on the Shield by two points. With a healthy Diego Valeri and Porterball in full effect, the Timbers will go one better and top the standings. MLS CUP CHAMPION
New York Red Bulls—Because it's Thierry Henry's final year. Because NYCFC arrives next season. Because, as Samuel Johnson said, "Depend upon it, sir, when a man knows he is to be hanged in a fortnight, it concentrates his mind wonderfully."

GOLDEN BOOT
Mike Magee—Mike Magee will prove that last year was no fluke. He will now be playing under Frank Yallop and I think that will help him as a player. The club narrowly missed out on the playoffs in 2013 but I think they'll make it this year and Magee will grab his scoring title. ROOKIE OF THE YEAR
Steve Neumann—The MLS Rookie of the Year is always so hard to predict. Neumann is my choice because he's a smart player and he will join a Revolution team that has worked so well with young players over the years—including Kelyn Rowe, Diego Fagundez, Andrew Farrell, and Juan Agudelo. DEFENDER OF THE YEAR
Chris Schuler—My surprise of this season is Chris Schuler who was a star for Real Salt Lake when healthy. He's injured at the start of this year but if he can get past this foot injury, I think he can be one of the elite defenders in the league. MLS MVP
Graham Zusi—Zusi has blossomed into the ultimate MLS midfielder and he will further stamp his relevance this year. The only thing stopping him is a long run in the World Cup and heavy European interest. SUPPORTERS SHIELD WINNER
Portland Timbers—I really like Portland's chances this year as Caleb Porter enters his second year. With some Argentine imports to go along with an established core, I think Porter's team will be the best team during the regular season. MLS CUP CHAMPION
Los Angeles Galaxy—In terms of the MLS Cup, it is just too tough to pass up on the Galaxy. With Donovan and Keane, I think the younger core of players like Zardes will step up and shine in the playoff format.

GOLDEN BOOT
Robbie Keane—Like Magee, Keane has the advantage of not missing any games due to the World Cup. He could very well gobble up goals in Landon Donovan’s absence, and he’ll reap the rewards of playing with an improved Gyasi Zardes and Robbie Rogers all season long. ROOKIE OF THE YEAR
Steve Birnbaum—United will inevitably improve on its dreadful 2013 campaign, and the former California Golden Bear should play a big role in the turnaround. Birnbaum is dominant in the air and will be instrumental in bolstering a defense that conceded more goals in 2013 than every team except Chivas USA. DEFENDER OF THE YEAR
DeAndre Yedlin—The lightning-quick right back will look to build on his All-Star campaign by snagging the league’s top honor for defenders. With major contenders Matt Besler, Omar Gonzalez, and Victor Bernardez all missing time at the World Cup, it could turn into a two-horse race between Yedlin and New England’s Jose Goncalves for the award. MLS MVP
Mike Magee—If Magee can drag the Chicago Fire to the playoffs and score tons of goals along the way, he will be in prime position to be the league’s first ever back-to-back MVP. Fair or not, he likely won’t make the World Cup squad, so he’ll have the chance to pad his MVP resume and goal tally while several fellow MVP contenders are in Brazil. SUPPORTERS SHIELD WINNER
Sporting Kansas City—SKC has the depth and confidence to follow up its MLS Cup win with a Supporters Shield. Losing Graham Zusi and Matt Besler during the World Cup won’t help, but Peter Vermes is more than capable of driving the team forward in the U.S. stars’ absence. MLS CUP CHAMPION
Los Angeles Galaxy—If LA had been more clinical at home and defended set pieces better in Salt Lake, Bruce Arena’s men easily could have beat RSL and marched onto the Cup final. With so much attacking firepower as well as a solid spine formed by Juninho, Marcelo Sarvas, and Omar Gonzalez, LA has every chance of winning its third title in four years.

GOLDEN BOOT
Robbie Keane—The Los Angeles Galaxy striker turns 34 this summer, and his advancing age is the only thing that might prevent him from taking the MLS scoring title. He doesn't have to go to Brazil, he's surrounded by talented teammates, and if he doesn't get injured this season he should get it done. ROOKIE OF THE YEAR
Patrick Mullins—University of Maryland soccer coach Sasho Cirovski knows a thing or two about talent, and he is bullish on the two-time MAC Hermann Trophy winner. With Juan Agudelo in Europe and Teal Bunbury a huge question mark, Mullins has an opportunity to do something special in his rookie season with New England. I think he will. DEFENDER OF THE YEAR
Amobi Okugo—Matt Besler and Omar Gonzalez are going to miss lots of time with their clubs, and Gonzalez may leave the league in August. Jamison Olave is a hamstring injury waiting to happen. So I'm going with a longshot in Okugo. With a year on the backline under his belt, the 22-year-old California native could take a big step forward this season.

MLS MVP
Tim Cahill—Chemistry + Desperation x Mike Petke getting even better = a great year for the New York Red Bulls. Cahill will will this team into the MLS Cup Finals, and get all the credit he deserves. SUPPORTERS SHIELD WINNER
New York Red Bulls—See above. MLS CUP CHAMPION
Los Angeles Galaxy—Don Garber's wet dream will become a reality: Robbie Keane and Landon Donovan will line up against Thierry Henry and Tim Cahill a few PATH stops from the media capital of the world. Juninho will score the gamewinner late in the second half to give the Galaxy a 3-2 win and its third title in four years. OK, now it's your turn. Share your 2014 MLS predictions below.