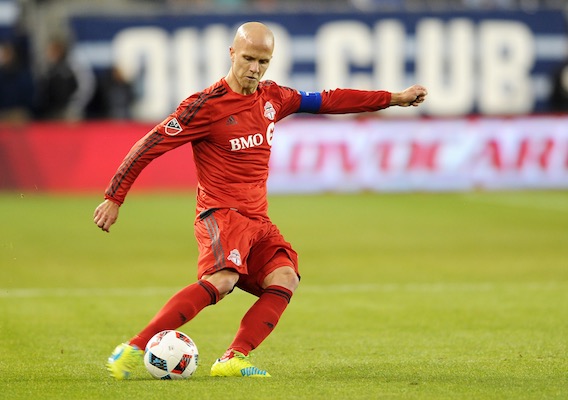 After a traumatic week for U.S. Soccer, the Major League Soccer playoffs returned fans' attention to the action on the field—even if the fields themselves left a lot to be desired.
BY Brian Sciaretta Posted
November 23, 2016
1:00 PM

THE CONFERENCE FINALS began Tuesday night and overall it was an entertaining night of soccer. Better yet for the neutral fan, both series are completely up for grabs heading into the second legs. To top it off, the designated players and U.S. national team regulars all delivered standout performances.

Jordan Morris, Michael Bradley, Jozy Altidore, Sebastian Giovinco, Nicolas Lodeiro, Kevin Doyle, and Ignacio Piatti all either scored or assisted on Tuesday, and the two matches generated eight goals in total. In addition to the star power, 103,000 fans were on hand between both games and provided and intense environment worthy of the playoffs.

The big-market teams may have been eliminated, but somewhere Don Garber is smiling.

In the 53rd minute of the Eastern Conference clash, Montreal’s Ambroise Oyongo hit a nice shot from outside the box to give the hosts a 3-0 lead at home and it looked as though the second leg in Montreal was going to be irrelevant.

But then Bradley and Altidore borth scored for Toronto FC. Giovinco was an important part of the rally as he assisted on Altidore’s first goal and was, as usual, a menace to defend.

In the end, Toronto fell to Montreal, 3-2, but the two away goals means that this series is completely wide open heading to Toronto—which should also be an intense night.

The real winners here is Canada. After seeing its national team in awful shape and MLS teams north of the border do very little in the league (Montreal’s improbable CONCACAF Champions League run to the final in 2015 being a total outlier), Canadians are thoroughly enjoying the playoffs as both Toronto and Montreal are putting on great performances in front of packed and enthusiastic stadiums.

Canada’s growth in the sport would be good for the league and good for the United States—just as the growth of the sport in the U.S has helped Mexico. The U.S. should welcome another rivalry.  Canadians are ready.

The Seattle Sounders rallied to defeat Colorado 2-1 in the second game after conceding the opening goal. The series is up for grabs but Seattle looks to be in good shape. Following the loss of Clint Dempsey and the ouster of Sigi Schmid, few would have imagined the Sounders being within a draw of appearing in MLS Cup.

But the team has adjusted very well. Nicolas Lodeiro has dominated the league since his arrival and Jordan Morris has lived up to the hype.

Another reason why the team is in great shape: the emergence of Cristian Roldan. The 21-year-old was very strong in the midfield and played a key role in Morris’ equalizing goal when he made a nice move through the midfield and unleashed a shot that hit the post. (Morris hammered home the rebound following a well-timed run.)

From that point,it was only a matter of time before Seattle moved ahead, and it did so after Lodeiro drew a penalty.

Colorado deserves a ton of credit this season because very few expected the club to achieve much in 2016. But Seattle’s rise is just as stunning, and the return leg in Colorado should be a thriller.

The atmosphere for the games was exceptional and the intensity felt similar to what you’d find in big European games.

But it wasn’t all great. Having two games on artificial grass in the playoffs was a major letdown. The fact that the start of the game in Montreal had to be delayed because the lines on the field were drawn incorrectly was comical—and the fact that the match was on national television only amplified the embarrassment for the league.

Also, the fact that Montreal moved this game to Olympic Stadium just shows that there is no way an August-to-May schedule is going to work in MLS. The weather is just too brutal in too many places, and haven't even reached December yet.

That said, playing games on artificial surfaces at this stage of the season is unacceptable for a league that has aspirations of being among the world's best.