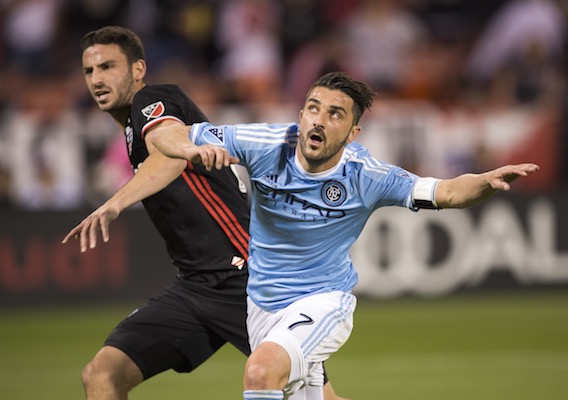 THE 2016 MAJOR LEAGUE SOCCER has featured plenty of surprises—how's it going, Colorado?—some memorable matches—you saw that 7-0 game, right?—and some praiseworthy performances. To honor the best of 2016 so far, we put together these midseason awards for your consideration. Agree? Disagree? Tell us in the Comments section below.

This is pretty obvious. New York City FC is in first place in the Eastern Conference and striker David Villa is the leading scorer in the league. Even when there were doubts about the team’s other designated players, Frank Lampard and Andrea Pirlo, there were never any questions about Villa who has bought into the team and league since day one. He has carried himself like professional.

What's even better for New York is that Villa has raised the game of team’s other players. Tommy McNamara has been fantastic while rookie Jack Harrison will benefit greatly alongside the Spanish legend.

Rookie of the Year: Keegan Rosenberry

Jordan Morris receives more attention but Keegan Rosenberry has been a very big part of Philadelphia’s turnaround in 2016. The Union has had to deal with a lot this year, including Maurice Edu's injury and Vincent Nogueira's departure. For a team that was not expected to compete for a playoff spot even at full strength, the Union has impressed during the first half of the season and is currently in second place in the Eastern Conference.

Rosenberry, 22, is an outstanding one-on-one defender and his ability to push forward into the attack has been valuable. Morris has done well in notching six goals but the fact is that Seattle is in last place and has the worst offense in MLS. Rosenberry has had the bigger impact due to his impact on the standings and helping a team exceed expectations and push towards the playoffs.

Will Rosenberry win the award in November? It will be tough. Offensive players tend to fare better and defenders tend to win only when an attacking rookies fail to stand out. On top of that, Jack Harrison is finally healthy and is looking very, very promising for New York City. He could very well dominate the conversation the second half of the season.

As for now in the first half of the season, Rosenberry’s impact has been the best of the bunch.

Coach of the Year: Patrick Vieira

There have been times this season when the thought of Vieira winning coach of the year was very unlikely. NYCFC infamously lost a game to the Red Bulls 7-0 and the team has struggled with inconsistency at times.

Even the harshest NYCFC critic will admit that this is a tough team to coach. There's pressure from City Football Group after the firing of Jason Kreis, there are the horrible soccer conditions at Yankee Stadium, there is an old contingent of designated players, and there are distractions such as Frank Lampard’s injury and Mix Diskerud’s disappearance from the roster.

But Vieira has made the most of it. The team rebounded nicely after the blowout loss and has risen to first place in the Eastern Conference. Tommy McNamara has blossomed into a solid player and Harrison is shaping up to be one of the league’s best young players.

It's hard to argue the Frenchman has not done an outstanding job in his first half-season.

Defender of the Year: Matt Hedges

Hedges has only played in 12 of FC Dallas' 19 matches, but the numbers are pretty eye-opening in terms of his value to the club.

In the 12 games featuring Hedges, Dallas has six wins, four draws, two losses with six cleansheets. Meanwhile Hedges has just two yellow cards and is the captain for the best team in the league. In those 12 games, FC Dallas has conceded 12 goals (although five goals came in an inexplicably bad loss to Houston—an outlier).

In the seven games without Hedges, Dallas has lost three times and has posted just one cleansheet while conceding 12 goals.

It's clear that Hedges brings a lot to a very good Dallas team. In addition to his own skills, as the team captain he brings out the best in others. Young central defender Walker Zimmerman has also matured as his partner.

Newcomer of the year: Carlos Gruezo

Carlos Gruezo is not making the same sort of impact that Sebastian Giovinco did last year as a newcomer but the Ecuadorian has been very good for both the league and for FC Dallas. He is the type of signing the league needs: a young, international-caliber player who chooses MLS over other quality leagues. Gruezo, 21, came in the offseason from Stuttgart in the Bundesliga and has done very well in his deep-lying midfield role.

While he played for Ecuador before coming to MLS, Gruezo was a starter for the national team at the Copa America Centenario. He even credited FC Dallas for giving him platform to translate his success over to the international level.

“My season in FC Dallas is helping me a lot in order to have this big chance with the national team,” Gruezo said. “I have no doubts about that, I am very grateful to them as well.”

His solid year could continue as Ecuador has important World Cup qualifiers ahead as it sits in second place in South America qualifying (Ecuador faces Brazil and Peru in September). In addition in 2016, FC Dallas and Gruezo will have the CONCACAF Champions League, a Supporters Shield race in the regular season, and the MLS Cup playoffs.

Goal of the Year: Quincy Amarikwa

The remarkable chip from Amarikwa.

Save of the Year: Nick Rimando

Rimando does a double, with the second coming off his face.

Those are Brian's picks. Feel free to share your thoughts below.