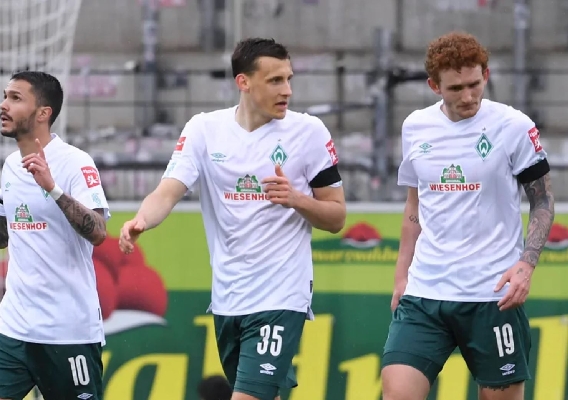 Mixed results and performances for Americans in Germany

The Bundesliga rolled on over the weekend and Brian Sciaretta looks into how the American players performed.
BY Brian Sciaretta Posted
May 26, 2020
5:05 AM
THE PAST WEEKEND in the Bundesliga continued to see mixed results from American players and coaches as well as uneven performances. In particular, John Brooks, Josh Sargent, and Weston McKennie all had performances that were tough to read and earned wide-ranging reviews.

The good news is that there is a quick turnaround with games on Tuesday and Wednesday in Germany and teams will be tested with squad depth and different approaches.

Given the quick turnaround, here is a look back at the recent games.


If you were to say that Erling Halaand would be held to 0 goals and 0 assists in a game, most would think that the central defenders for Borussia Dortmund’s opponents had a good game. For John Brooks, he was mostly solid despite Wolfsburg’s 2-0 loss to a red-hot Dortmund that that has now won six Bundesliga games in a row by a combined score of 15-1.

Brooks was able to contain Halaand very well and did his part to keep the game manageable until Achraf Hakimi put Dortmund up 2-0 in the 78th minute.

There are fair criticisms of Brooks’ positioning on both goals. On the first, he was even near the play in the middle of the box as he was pulled out wide. On the second goal, he fell out of position early in Dortmund’s counterattack.

But Brooks should be judged on the difficulty of his assignment. Wolfsburg lost this game because Borussia Dortmund is simply a much better team right now and Dortmund has so many ways it can score that defending it right now is nearly impossible.


On Tuesday, Wolfsburg will visit Bayer Leverkusen. It’s a tough assignment but not as hard as Dortmund.

U.S. youth national team winger Ulysses Llanez is traveling with the first team for that game and could make his debut.

McKennie and Schalke get routed again


It is becoming a bit of a broken record. Weston McKennie puts in a typical performance for Schalke but the team gets dismantled. This time dropping a 3-0 result to Augsburg on Saturday. McKennie played 78 minutes and left with Schalke trailing 1-0.

McKennie, 21, was far from perfect in the game. He suffered some bad giveaways and turnovers. But he also showcased his strengths. His physicality, the disruptive presence, the ability to occasionally hit a really classy pass (sometimes from a deep position) are really strong aspects to his game.

His raw numbers were okay.

Schalke is an absolute disaster right now. Over its last 842 Bundesliga minutes, it has been outscored 22-2. It is struggling mightily to even create chances and head coach and former U.S. national team forward David Wagner is likely going to come under serious pressure to turn it around.

McKennie has already shown himself to have some very good starting points as a player and he is above average in the Bundesliga at some key areas. But right now, Schalke is a place where it is easy for players to be frustrated. For McKennie to improve on his weaknesses, he needs a place where he can be confident, not frustrated. Frustration is certainly going to happen when players around him can’t score, or even create and defenders are frequently out of position. McKennie might be in a position where he feels he has to do too much. If he’s frustrated and lacks confidence in his teammates, he could stagnate and continue to make the same types of mistakes.


Josh Sargent, 20, earned a big win on Saturday with a 1-0 victory over SC Freibrug. That win was even better when later that day Fortuna Dusseldorf saw its 2-0 lead on FC Koln collapse and finish 2-2. Werder now sits just three points from Fortuna in the race to finish in the relegation playoff position – as opposed to automatic relegation.

Sargent played 63 minutes in the game and left with Werder up 1-0. He was not involved in the goal.

Overall, he was active and showed some good ability to hold the ball up at some key moments. But he did not see nearly enough of the ball. 21 touches showed either Werder’s lack of service or Sargent’s inability to break free from defenders with effective off the ball movement – or a combination of both.

It was not a bad outing from Sargent but he must address ways of seeing the ball more often.
Freiburg was the better team in this game despite Werder getting the result. It will be interesting if Werder can use this win as a way to spark a late-season run. If so, can Sargent continue to play a role in an effort to stay in the top flight?


Adams impresses off the bench


Tyler Adams came off the bench on Saturday for RB Leipzig in a 5-0 win over lowly Mainz. The former NY Red Bull came on in the 56th minute and went a perfect 28/28 in passing.

Adams was very sharp in limited action and Mainz was completely out of the game when he came on. The fact that Adams came off the bench could be due to a quick turnaround for Wednesday game against Hertha BSC.

But the performance was important because Adams is gradually looking like he was during the end of his tenure in New York and his first few months with Leipzig.


Timothy Chandler came off the bench and played the second half for Eintracht Frankfurt in a 5-2 loss to Bayern Munich.

Alfredo Morales was typically quiet for Fortuna Dusseldorf but that team suffered what could turn out to be a critical letdown conceding two late goals in a 2-2 draw with FC Koln.

In the 2.Bundesliga, American manager Pellegrino Matarazzo and Stuttgart are falling into trouble in their promotional race in a 3-2 loss to Holstein Kiel.