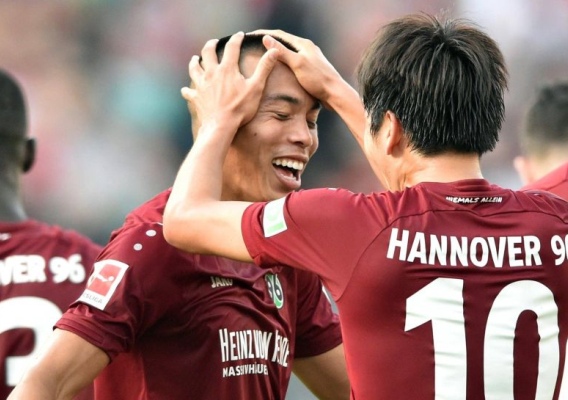 It was a better weekend than last for Americans in Europe as Wood and McKennie impressed. But McKennie's injury and a brutal weekend for American defenders but a damper on the past few days.
BY Brian Sciaretta Posted
October 08, 2018
12:00 AM
LAST WEEKEND was terrible for Americans abroad where seemingly everyone except for Jann George played poorly or was part of a bad loss. This weekend was better but overall was a mixed bag – with good and bad.

So what went right and what went wrong? Let’s take a look


Bobby Wood has had a tough year. He did not produce much last season for Hamburg and the club was relegated. He was unable to stop the U.S. team’s failure in World Cup qualifying. He went on loan to Hannover this season and the club was off to a poor start in the Bundesliga.

Saturday was one of the best days for Wood in a very long time. The Hawaiian scored two goals, both via headers, for Hannover in a 3-1 win over Stuttgart. Like most strikers, Wood thrives on confidence. Now he will have some in droves heading into the international camp


Weston McKennie will remember this week forever. On Wednesday he scored a game-winner for Schalke in a 1-0 triumph over Lokomotiv Moscow in a Champions League game in the Russian capital. It was his first goal in Europe’s primer club competition.

On Saturday, McKennie scored his first Bundesliga goal in a 2-0 win over Alfredo Morales and Fortuna Dusseldorf.

Unfortunately for the Texan, he left the game with an injury in the 78th minute and was subsequently removed from the upcoming U.S. national team roster.


Emerson Hyndman, 22, has found it tough to get his European career going. England has been a tough fit for him and while he performed well in 2017 on a loan to Rangers, the Scottish club lacked the funds to purchase the Texan.

Now on loan again to Hibernian, Hyndman has shown quite a bit of rust to start off the season but on Saturday he put on his best showing yet in a 6-0 pounding of Hamilton Athletic. Hyndman scored the team’s third goal.

Right now this season is very important for Hyndman to get going, show consistency, and force a permanent transfer away from AFC Bournemouth. He’s good enough to be a consistent starter somewhere. He has a European passport which gives him access to clubs across the continent. He needs to come into his own.


Romain Gall, 23, has had a nice season in Sweden and the Paris-born American scored again for Malmo in a 1-1 draw with Hacken. Combined with his time at GIF Sundsvall (the club he left in July), Gall has 13 goals and seven assists across 25 games in all competitions in 2018. It is a career year for Gall.

While Gall was not called up to the U.S. national team (and to Dave Sarachan’s credit, the late included Fafa Picault also had a big weekend with two goals for a vastly improving Philadelphia Union team), Gall is continuing to make noise. If he can continue to produce in 2019, it seems likely that he’ll eventually get a look.


Geoff Cameron and Omar Gonzalez are two American players not typically on the mind of most American fans these days. One is now in the Championship and the other is in Liga MX and neither of those leagues is particularly well-followed by American fans these days. On top of that, neither player is likely to play a part with the U.S. team moving forward as the younger generation of players is strong in central defense and central midfield.

Still, both Gonazalez and Cameron found the back of the net this weekend. Cameron scored his first goal for Queens Park Rangers in a 1-1 draw with Derby County. Omar Gonzalez scored for Atlas in a 3-1 loss to Santos Laguna – and the loss further cemented Atlas at the bottom of the Atlas standings.


It was a brutal weekend for European defenders on the U.S. national team in Europe. Without question, it was a nightmare.

Let’s break it down.

Matt Miazga and FC Nantes were outclassed by Bordeaux 3-0. Bordeaux came into the game in ninth place and the game should have been winnable for Nantes – but Bordeaux scored three first half goals and coasted the rest of the way. Nantes now sit in 19th place in the 20 team Ligue 1.

Wolfsburg and John Brooks are starting to come back to reality after a great start to the season. On Friday the club dropped a 2-0 decision to a surprisingly good Werder Bremen team that is now in fourth place.

Antonee Robinson, 21, and Wigan Athletic had a disastrous performance on Saturday in a 4-0 loss to a Preston North End team that was in last place in the Championship at the start of the game.

DeAndre Yedlin actually played well for Newcastle but the club coughed up a 2-0 lead late to lose 3-2 against Manchester United at Old Trafford. All eyes were on this game as a potential nail in the coffin on Jose Mourinho's tenure with The Red Devils.

Meanwhile, Cameron Carter-Vickers did not play for Swansea City. Perhaps it is good news for the American central defender that he did not play in a 3-2 loss at home to Ipswich. A loss can only make it more likely for changes in the starting XI.

The only American defender in Europe who had a good weekend was Brendan Hines-Ike who got the start for Kortrijk yet again out of position at right back. On Saturday, Kortrijk came away with a 3-1 win away over a poor Lokeren side that has just five points in 10 games to start the Belgian season. Kortrijk, meanwhile, is in 11th place in the 16 team league.