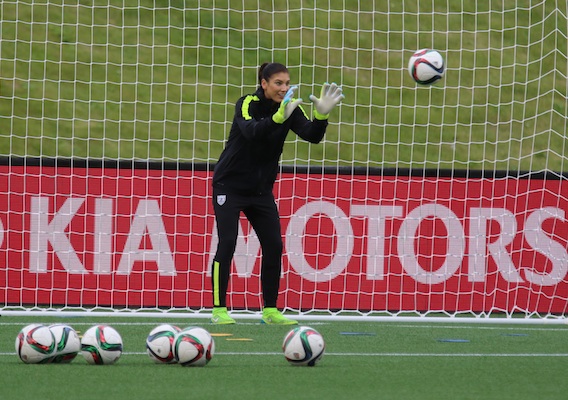 Missing Two Starters, U.S. Women Need to Step It Up

Megan Rapinoe and Lauren Holiday will miss Friday night's quarterfinal match against China, which means somebody, anybody, needs to come forward and make an impact for the U.S. women's national team.
BY John D. Halloran Posted
June 25, 2015
8:00 PM

AFTER SLIPPING PAST COLOMBIA in the Round of 16, the United States women's national team will now move from Edmonton to Ottawa, where it will face China in the 2015 Women's World Cup quarterfinals.

Friday night's match (7:30pm ET, Fox) pits the second-ranked Americans against the 16th-ranked Chinese. Here are three things you'll want to keep an eye on as the contest unfolds.

China Has a Chance

Of all four quarterfinal games scheduled for Friday and Saturday, the Americans have, by far, the easiest draw. In the other quarterfinal game on Friday, No. 1 Germany—which looks unstoppable—will battle No. 3 France in a game worthy of a World Cup final. On Saturday, in the other two quarterfinal matchups, defending World Cup champions and No. 3-ranked Japan will play No. 10 Australia, with No. 6 England and No. 8 Canada clashing Saturday night for the final spot in the semis.

Rankings aside, the Americans can't afford to look past the Chinese. Once among the world's elite in women's soccer—and runners-up to the U.S. in the famed 1999 tournament which the Americans won on penalties—China's program, until recently, had been in steep decline.

Starting last year, however, the Chinese program started a rapid turnaround. It went 9-5-4 in 2014, a record that includes two losses to the U.S. last April and a 1-1 draw against the Americans during the International Tournament of Brasilia in December.

So far in this World Cup China has defeated the Netherlands and Cameroon while drawing against New Zealand and losing to host-nation Canada 1-0—on a penalty of debatable merit.

In each game of the tournament thus far, China has lined up in a 4-2-3-1. The team's two danger players—the pair the U.S. defense will no doubt focus on—are striker Shanshan Wang and right wing Lisi Wang. Each has scored twice in this tournament.

On the defensive side of the ball, the Chinese can also present some problems. They have allowed just three goals in four matches and are widely respected as an "organized" side.

The U.S. Dept. of Defense

For the U.S., there are positives and negatives to consider heading into Friday's game.

First, the good news. The American defense has registered three shutouts in four games and hasn't given up a goal in 333 minutes in this World Cup. Furthermore, the backline of Meghan Klingenberg, Becky Sauerbrunn, Julie Johnston, and Ali Krieger (combined with Hope Solo in goal) has given up a measly two goals in their 10 starts together— a remarkable 0.2 goals against average. With a win against China, Solo would also surpass Brianna Scurry as the U.S. all-time wins leader with 134.

Beyond the defense, however, questions abound.

While many fans have wondered why the American offense hasn't been clicking, the more immediate issue is who will replace Megan Rapinoe and Lauren Holiday in the U.S. lineup on Friday. Both were carrying yellow cards heading into Monday's match with Colombia and both were cautioned against the South Americans. As a result, both are suspended for the game against China.

Big question when the USWNT is missing Rapinoe and Holiday on Friday: who takes the set pieces and corners?

Holiday will almost certainly be replaced by Morgan Brian, but replacing Rapinoe—who has been on a tear this World Cup—is a much more difficult proposition. Against Australia, Rapinoe scored two of the team's three goals and picked up the "hockey assist" on the third. She assisted on the U.S.' lone goal against Nigeria and against Colombia she was instrumental in both U.S. penalties.

In the Jill Ellis era, no player has been more effective against top teams than Rapinoe. Over the last 16 months, the U.S. has played 17 matches against teams that qualified for the knockout round of the 2015 World Cup. In those 17 matches, Rapinoe has been the team's most productive player by a fairly wide margin.

The obvious option to replace Rapinoe is Christen Press who, after being tipped by many to be a breakout star this summer, has had a disappointing tournament so far. After scoring in the opener against Australia—while playing on the wing—Press was pushed up top against Sweden and was ineffective.

That performance earned her a spot on the bench for the Nigeria game and she entered only as a late substitute—when the game was fully in hand—against Colombia.

A less obvious choice for replacing Rapinoe would be Heather O'Reilly. The once-prominent winger—who was still a staple of the starting XI throughout the first few months of 2014 under former head coach Tom Sermanni—was relegated to a substitute's role in the second half of 2014 after Ellis took the reins. She was dropped almost completely out of the rotation in 2015.

While O'Reilly lacks a level of technical sophistication (to be fair, the same could be said about most of the U.S. squad in recent months), she does provide natural midfield width, an unmatched work rate, and an unceasing desire to go endline against defenders (although this maneuver is extremely predictable and always with the exact same "fake-serve and go" move).

Other options for Ellis out wide include Sydney Leroux, who is not a natural winger but would be a nightmare to defend in space, and Kelley O'Hara, who has played on the wing for club and country in the past.

That said, the U.S. is one of the few teams in this tournament that can afford to lose a top player or two.

Speaking ahead of Friday's clash with China, striker Alex Morgan—who herself has been limited this tournament due to injury—remarked on the team's depth.

"If players have two yellows, like in the next game, some players who haven't gotten as many minutes, or any starts, can come in and make a difference," she said. "I think that's really great because I have full confidence in our bench and all 23 players...I think the depth of our squad is going to be the difference maker."

In seven World Cups, the United States has never failed to advance to the semifinals and it has never finished lower than third place. But it's obvious that the rest of the world is quickly catching up and the U.S. hasn't been doing itself any favors this summer with a series of distractions following the team.

First came the lurid details surrounding the Hope Solo domestic violence incident that came out just before the Americans' first game. Then, after the scoreless draw with Sweden in the second game, Abby Wambach argued that the U.S.' offensive woes were due, in part, to the artificial turf in Canada.

Most recently, Wambach created another distraction when she insinuated that the official in the U.S.-Colombia match went out of her way to target both Holiday and Rapinoe.

"It seemed like [the official] was purposefully giving those yellows to the players she knew were sitting on yellows," Wambach said.

Wambach has since apologized—likely out of fear that FIFA could (as it has in the past with players who have criticized the officiating) suspend her. But still, the worrying trend remains that the Americans seem to be full of excuses for their poor play.

On the bright side, the U.S. has been winning despite its poor play and there's something to be said for grinding out wins when needed. The team features a veteran core that knows how to handle the pressure of knockout round matches. And even the team's youngsters know it's time to put up or shut up.

"Playing the last game against Colombia, we sensed a different urgency in the game," Morgan Brian said. "It's win or go home."