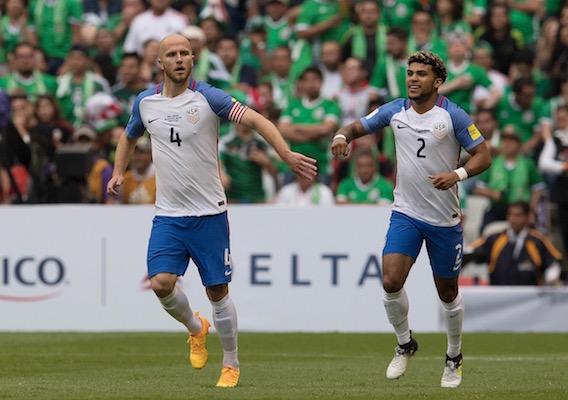 Michael Bradley Will Try to Make More Magic in MLS

Week 16 of the Major League Soccer season puts the national team captain in the spotlight. Also, keep an eye out for the NYCFC-Seattle clash early Saturday, and the Revs-Fire battle later that day.
BY Franco Panizo Posted
June 16, 2017
6:30 AM

THE INTERNATIONAL "BREAK" IS OVER, the U.S. Open Cup has been put on the backburner, and MLS action is ready to be the talk of the town once again.

The main attraction and biggest talking point going into it all? Michael Bradley.

Bradley is fresh off a pair of impressive performances for the U.S. national team in World Cup Qualifying, and now returns to Toronto FC aiming to build on his recent outings and the club’s strong start to the year. He is undoubtedly entering the weekend high on confidence after scoring a sensational chipped goal at Estadio Azteca last Sunday, but will want to avoid suffering a setback and major letdown when he goes up against an opponent that could be easy to look past.

Toronto will welcome D.C. United to BMO Field on a busy Saturday that sees 20 MLS teams in action, and anything less than three points for the Canadian side will be seen as a major disappointment. Last-place D.C. is not only at the opposite end of the Eastern Conference table, but Greg Vanney’s men have yet to lose at home in regular-season play this year.

While those signs and many more point to this being a victory for Toronto, anyone remotely familiar with MLS’s parity knows that there are no such thing as “gimmes." D.C. United’s attack may be the worst in the league—yes, even worse than that of the Colorado Rapids—but it still has options that can do damage if Toronto FC comes out in second gear.

That's where Bradley comes in. As the key cog in Toronto’s midfield, Bradley will need to help set the tone against D.C. United. He may not need to score a golazo like he did against Mexico to make a difference, but being sharp with his passing and defensive positioning would go a long way toward securing a win.

Orlando City’s game against the Montreal Impact on Saturday night will draw plenty of eyeballs, but for all the wrong reasons.

Star striker Cyle Larin was arrested on a DUI charge on Thursday morning, and will now miss the Lions’ showdown with the Impact. The development is a crushing one for Orlando City, as it not only robs the club of its top scoring threat but also brings an unnecessary distraction, and plenty of questions, at a time when it seemed like Orlando was rediscovering its gritty-but-effective identity.

How head coach Jason Kreis and his players deal with the dark shadow that has been cast over the team is something that bears watching. The adversity Orlando City is now facing could either unite the group or sink it altogether.

One of the key goals of this weekly column is to call out the most interesting games on tap each weekend. Yes, you're all but certain to watch your local team on Saturday or Sunday, but what other games are worthy of two hours of your weekend. Of the 10 games on tap for Saturday, several stand out.

One affair that is likely to provide plenty of entertainment is the meeting between New York City FC and the Seattle Sounders. From David Villa to Clint Dempsey to Nicolas Lodeiro, plenty of big names should be on display as the two sides battle it out at Yankee Stadium in the day’s earliest encounter (10am if you are in Pacific time zone!). The challenge of dealing with a quick turnaround will be present for both, however, given that Seattle played an Open Cup game on Tuesday before traveling cross-country while New York City had its tournament tilt on Wednesday.

A later affair that should be fun is the New England Revolution’s clash with the Chicago Fire. New England has posted 3-0 wins in successive games across all competitions, but will have to find a way to solve a Chicago defense that has posted four shutouts in its last five outings (five in six if you include the midweek Open Cup result). What’s more is that Bastian Schweinsteiger and Co. are confidently riding a seven-game unbeaten run, so the Revolution will have its hands full in this Eastern Conference brawl.

One late fixture that you may not want to miss is the Colorado Rapids-Portland Timbers encounter. While this may look like a mismatch given where the two clubs stand in the Western Conference table, Colorado has the benefits of being at home and going up against a Portland defense that will be missing one of if not both Liam Ridgewell and Roy Miller at centerback because of injury. Of course, the Rapids also has to focus on keeping the ball out of the back of its own, and doing so against a confident Fanendo Adi is no easy objective.

Real Salt Lake is embarrassingly awful right now. Not only did the club go into the international break with a pair of defeats that saw it concede 11 times and make head coach Mike Petke foam at the mouth, but it also lost a midweek Open Cup match to Sacramento Republic by a 4-1 mark.

"They are going to be fighting like dogs for positions because it's not good enough." pic.twitter.com/jMmRk3j0YV

Clearly, there is plenty to address—but not much time. Minnesota United pays a visit to Rio Tinto Stadium on Saturday night looking for its first win away from home, and Salt Lake need to stop the bleeding at the back in order to have any shot at righting the ship.