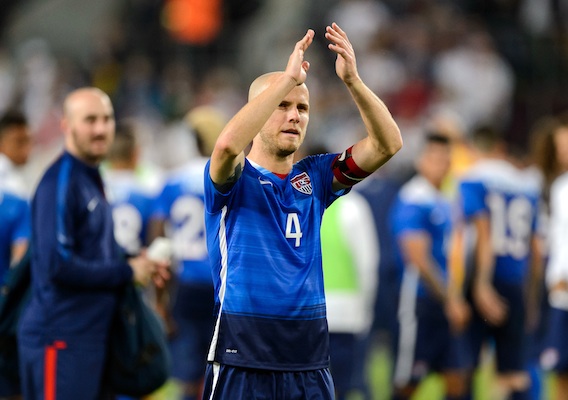 Michael Bradley Gets to 100 Caps: An ASN Celebration

TONIGHT MICHAEL BRADLEY will become the 16th player to reach 100 caps for the United States men’s national team when the Yanks open up the 2015 Gold Cup against Honduras. The game comes just a few days after Jurgen Klinsmann named Bradley the team’s captain.

Bradley, 27, earned his first cap under head coach Bruce Arena in the run up to the 2006 World Cup although he was not a part of the squad that played in Germany. At his age, there is a realistic possibility he could challenge Cobi Jones’ mark of 164 caps for most in team’s history.

While there is still plenty of international soccer to come from Bradley, here is a look back at some of his most memorable moments while playing for the United States.

While this game was only for a U.S. youth contest, it still was a significant achievement because Bradley was at that point already a full national team player. In fact, he played double duty that summer as part of both the 2007 Gold Cup and with the U-20 World Cup team.

Just days after an instrumental performance where he lead his team to a 2-1 win over Brazil, the United States had to take on a Uruguay team that featured both Luis Suarez and Edinson Cavani. After the United States equalized the game in the 90th minute, Bradley found an extra time winner in the 106th minute (at 3:42 of the video above).

While just friendlies, these games carried added significance for Bradley as he wore the captain’s armband for the United States in a pair of high-profile friendlies. When Clint Dempsey missed out on a pair of friendlies in March, Bradley wore the armband for the first time. For these games, however, he was given the armband in a more deliberate manner. The response were two of Bradley’s best performances in years en route to away wins over two of the world’s great teams.

These performances likely set the stage for Bradley being named the team’s captain for the Gold Cup.

This game made for one of the great reversals of fortune in team history. Entering the game everyone thought the U.S. team had no chance to advance out of its group. For the Yanks to move into second place and into the semifinals, the U.S. had to defeat Egypt by a minimum of 3-0 and Brazil had to defeat reigning World Cup champions Italy by at least a 3-0 score.

After the U.S. took a 1-0 lead, Bradley scored the second goal when he took a pass from Landon Donovan and fired it past Egypt’s keeper. It was a vintage Bradley goal that came off a very smart and well-timed run into the box.

Eight minutes later, Clint Dempsey scored a third goal. As Brazil posted a 3-0 win over Italy, the U.S pulled off a miraculous result to move into the semifinals where it would defeat Spain.

Bradley was given a red card at the end of the U.S. team’s historic upset over Spain and was forced to miss his second straight final (he was suspended for the 2007 Gold Cup final). The U.S., of course, squandered a 2-0 halftime lead to Brazil and eventually lost 3-2.

Would it have been different if Bradley had been allowed to play? With the form he displayed against Egypt and Spain, it is very possible the U.S. would have won that tournament with Bradley on the field against Brazil.

The U.S. is now currently riding a four-game streak of dos a  cero wins in home World Cup qualifiers against Mexico in Columbus, Ohio. The third installment, in 2009, was a an epic game that featured all that you would expect from the rivalry. The American Outlaws showed up in full force despite a brutal rainstorm that hit the stadium just before kickoff. Rafa Marquez earned a red card and the U.S. team earned the result.

Bradley was the man of the match because for the first time in this history of dos a cero, one player supplied the “dos” by himself.

Bradley’s goals— in the 43rd minute and in the second minute of stoppage time—were more than enough to give the U.S. team a strong start in the Hex. It marked a turning point for Bradley who was playing his biggest and most important national team game to date. And he delivered.

At halftime, the United States trailed Slovenia 2-0 and most people figured that its World Cup campaign was not going to go beyond the group stage. Landon Donovan pulled one back in the 48th. In the 82nd minute, Bradley was the hero when he equalized on yet another perfect run into the box.

It was one of those moments—every U.S. fan will remember where he or she was at the time.

Of course, the Americans were robbed of a winning goal moments later when Edu’s tally off a spot kick was denied for reasons that have never been fully understood. That being said, it only set the stage for the team’s most famous goal in its history just days later against Algeria—which wouldn’t have been possible if not for Bradley’s goal against Slovenia.

Did we leave off your favorite Michael Bradley moment? Share below.