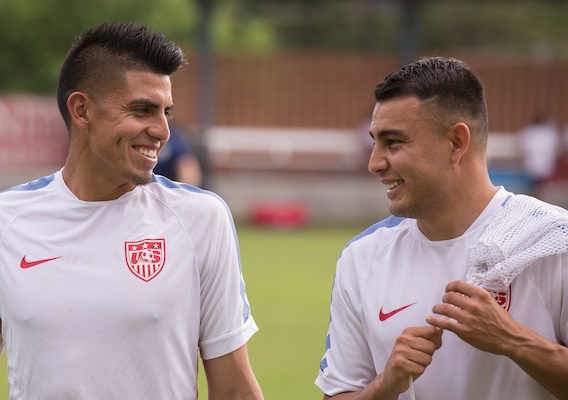 The Mexican-American Experience and the USMNT

SAN ANTONIO—From its name, to its architecture to its most famous landmark, this has always been a city that has been as Mexican as it was American, regardless of which word came before the hyphen.

It’s a city where Hispanics aren’t some up-and-coming voting block or demographic but rather a majority—and they have been for years. And no, it’s not a coincidence that this South Texas city was chosen to host this week’s now-annual clash between the national soccer teams of the United States and Mexico.

For games that matter, meaning World Cup qualifiers, U.S. Soccer has long chosen venues in cities with smaller Mexican-American populations to better ensure a pro-U.S. crowd. But for a friendly, which is as much a cash-grab for the federations as it is a chance to develop national teams, selling tickets trumps a competitive edge. And that goal has already been met as the 65,000-seat Alamdome sold out in for this game in February.

Given the city’s demographics and based on a quarter century of national team precedent, it figures to be a pro-Mexican crowd at kickoff Wednesday (8:30pm ET, FoxSports1). But for a large chunk of the U.S. roster for Wednesday’s game, the match is also a chance to remind all those Mexican-American fans rooting for El Tri that the U.S. national team represents them as much as Mexico does.

There are seven players on the U.S. roster with Mexican heritage: Ventura Alvarado, Joe Corona, Greg Garza, Omar Gonzalez, Miguel Ibarra, Nick Rimando, and William Yarbrough, who was born in Mexico to parents from Texas. (Rimando also has a Filipino father and Corona’s mother is from El Salvador.)

An eighth, Michael Orozco, was originally named to the roster but was recalled at the request of his club, Puebla, which is in a relegation battle and would prefer him to be fresh for this weekend’s game. Several other Mexican-Americans have played for the U.S. the past two World Cup cycles, including Jose Torres, Herculez Gomez, and Edgar Castillo.

“If you grew up here and you’re Mexican, your parents, your family, they all rooted for Mexico,” said Ibarra, whose parents are from Guadalajara. “You hope the fans might see this team, see other Mexican-Americans, and maybe root for us too.”

With the exception of Yarbrough, these aren’t passport Americans—players who learned the game abroad and are eligible only to play for the U.S. because of parentage or place of birth. These Mexican-American players all learned the game on fields and leagues and school yards north of the border and are as much a product of American soccer as suburban prodigies like Michael Bradley, Tim Howard, and Landon Donovan.

Gonzalez, the Los Angeles Galaxy defender, is the poster child for Mexican-Americans in the U.S. developmental system. His parents are from Monterrey; he grew up in Dallas; he played college soccer at Maryland; he has spent his entire pro career with the Galaxy; and he played for the U.S. in last summer’s World Cup. He is optimistic that seeing people with a shared experience will lead to more Mexican-Americans rooting for the U.S. over their parental homeland.

“I think so. Just like myself and Ventura and Joe Corona and the rest of the guys," he said, "we’re all Mexican-Americans who, our parents are from Mexico but we’re born here in the U.S. And we now play for the U.S. national team and the more generations that are born here they’ll start rooting for the U.S.

“They’ll still have their roots. I’m sure when the U.S. plays Mexico it’s tough to pick a team but when they’re not playing each other I’m sure they’re rooting for each team.”

For Alvarado, who plays for Mexican power Club America and has had interest from the Mexican national team but chose to play for the U.S., his national team choice will force his parents to switch allegiance.

“I don’t think they ever rooted for the U.S. before,” said Alvarado, whose parents will be traveling here from his home in Phoenix. “Not when they played Mexico. But people change, you know. You hope that they might at least root for the U.S. when they’re not playing Mexico.”

The Mexican-American contingent were the darlings of the large Hispanic broadcasting contingent here, all thrilled to have American players who are part of this rivalry who speak fluent Spanish and can give them their soundbites.

One-by-one, Monday Alvarado, Ibarra, Gonzalez and Garza gave the cameras what they wanted.

The large Spanish-speaking media assemblage here reflects both the interest in the game and, very likely, tips off who the majority of fans will be rooting for.

“Hopefully it can be a little but more American flavor but we know that being so close to Mexico we’re going to have a lot of Mexican fans,” said Gonzalez. “But hopefully it can be half and half and end up being a really good fan base.