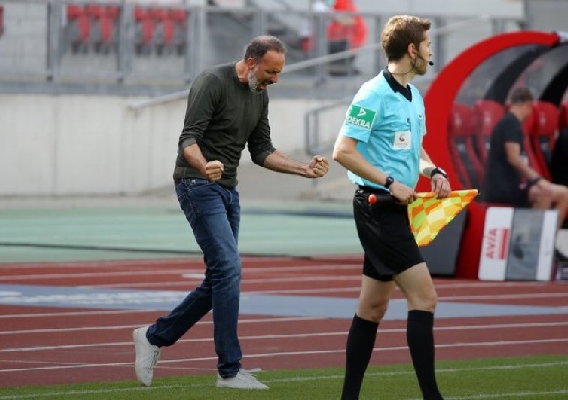 Pellegrino Matarazzo has had a tough time this season at Stuttgart with injuries and covid cases. That has forced him to manage in a firece relegation battle. The Bundesliga's only American manager discusses what it is like to manage in a relegation battle and discusses his thoughts on the Bundesliga's youthful approach, the growing American contingent in Germany, and his ties to states.
BY Brian Sciaretta Posted
March 03, 2022
11:00 AM

WHEN VFB STUTTGART hired Pellegrino Matarazzo in the winter break of the 2019/20 season it was a stunning hire. Despite being in the promotional race, the club decided make a managerial change and turned to a young manager from New Jersey who had never led a team at the first team level. Since that time, Matarazzo led his team to promotion in his first season and easily kept the team in the Bundesliga in his second. Now in his third season he is facing his first ever relegation battle.

It’s been a tough season for Matarazzo. He’s been forced to deal with serious injuries to key players and positive covid cases which has left his team shorthanded at key moments.

Stuttgart is now currently 17th in the 18-team league and is four points from safety. His last two games have been among the most difficult as the team conceded an equalizer to Bochum on the last kick of the game in a 1-1 draw. Then last week, the team held a 1-0 lead on Hoffenheim into the 84th minute but ended up losing 2-1.

Managing in a relegation battle has forced him to change his approach.

“This battle for relegation - it's very, very psychological,” Matarazzo said. “This club is ginormous with a big fan base and a lot of history… and the more pressure you have, the more you have to be more of a psychologist than a football coach in this situation… it's about rebuilding confidence.”

“We lost two of our top goal scorers in the first half of the season. I'm not wanting to make any excuses because we have other players that were, of course, on the roster. But it just was a continuous destabilization of the squad with a lot of players kind of falling out of the roster. We fought through that try to stabilize a bunch a bit through less variations on our game… In our last couple of games. We've changed our structure. We defended with a flat back four, 4-1-4-1, to try to put more emphasis on counter-attack, less risk in our own build up coming out of the back, and we've had chances to win the games… Against Hoffenheim, you did sense the psychological part of the game, which is the fear of losing kind of setting in.” 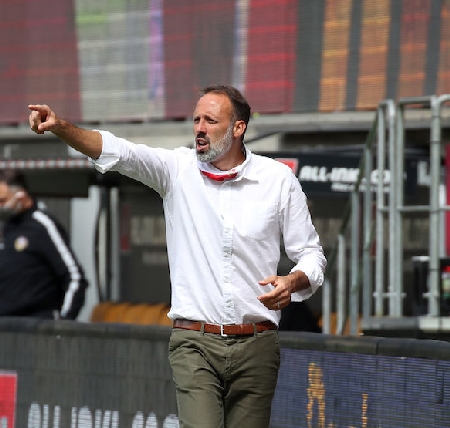 Matarazzo, 44, is one of the newer managers in the Bundesliga and his philosophy matches the trends that are found across the league. More than most of the top European leagues, the Bundesliga is eager and willing to play young players. Even players from other top European countries, like England’s Jadon Sancho, are eager to leave home to start their career in Germany.

Despite being in a relegation battle, Matarazzo is not scared to play young players with the assumption that older players will be able to automatically handle the situation better.

“They see it as a very competitive league, a good balance between, technicality, tactics, and being physical,” he added on the draw of the Bundesliga for young players. “It's a good stage for young players to develop. It's also important that coaches are bold enough to play young players if they're ready. We see a lot of young coaches as well developing in the Bundesliga who are bold enough to play young players… That's our vision [at Stuttgart]. We're moving to get in that direction of recruiting international players, developing them, and then at some point where they're no longer possible to be held, you need to sell and develop the next talent.” 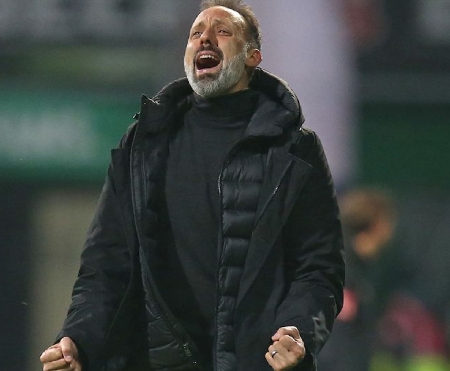 Of course, as the Bundesliga has trended in a youthful direction it has also led to more young Americans being targeted by German clubs. It helps that the Bundesliga has fewer restrictions on non-EU imports than most top European leagues, but with the league aggressive with playing young players, it has made for a perfect storm over the past several years to attract an impressive contingent of American players such as Christian Pulisic, Weston McKennie, Tyler Adams, Gio Reyna, Chris Richards, Ricardo Pepi, Kevin Paredes, George Bello.

At the start of the 2019 season, David Wagner became the first American citizen to manage in the Bundesliga but when Matarazzo was hired six months later, he became the first American manager in the league who was both born and raised in the United States. At the start of this current season, Jesse Marsch was hired to coach Leipzig but left the club in December. For now, Matarazzo is the only American manager in the Bundesliga. 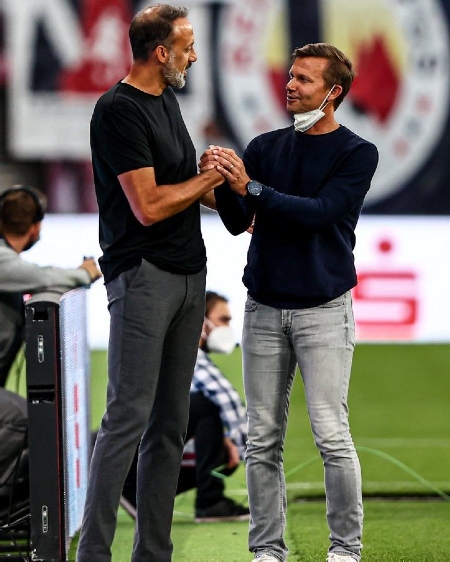 Matarazzo is very excited about the growing American presence throughout the Bundesliga, but he doesn’t spend too much time thinking about whether is part of the movement.

“Whether or not I'm a part of that - I guess I am,” Matarazzo said about the American influx in the Bundesliga. “I don't really sense that because I'm here overseas, just doing what I'm doing,” Matarazzo said.  “I like seeing the guys on the field when we're playing against them. It's nice just to kind of give them a handshake or just say hi and just talk, speak English, even though my English is terrible at the moment [laughs]. Seeing the guys over here, just taking big steps is a very, very nice to see. I look forward to each matchup that we have.”

Matarazzo’s career in Germany essentially began after he left Columbia in 2000. He moved abroad to pursue a playing career, but injuries prevented him from rising above the third tier. He quickly transitioned into coaching in 2010 with Nurnberg at the youth levels. Then he moved to Hoffenheim where he became a first team assistant under Julian Nagelsman. That is essentially what paved the way to Stuttgart.

Despite being in Germany, he still feels attached to the United States and considers it home for him. A native of Fair Lawn, NJ, Matarazzo’s family is still in the Garden State.

“Back in the states, my family, my friends are home,” Matarazzo said. “I talk to the guys back home on a regular basis. I'm very, very connected with the states.” 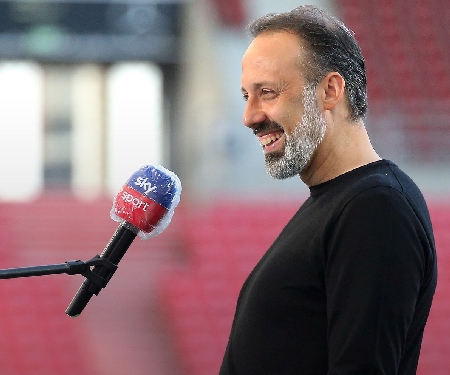 Many of Matarazzo’s biggest influences in his life are American. As a young player he attended a camp run by Bob Bradley. His parents are natives of Italy but he watched American soccer and American sports in addition to being influenced by Roberto Baggio, Diego Maradona, and other greats of Serie A.

“It would be nice to meet Phil Jackson, someone has just done some great work. I’ve read his books and just very, very fascinated with his approach,” Matarazzo said. “I used to like Tab Ramos on the men's national team - also, Marcello Balboa. Tony Meola was a New Jersey guy. I used to be Tony Meola when playing in goal with my brother - who was also Tony when he played in goal.”

Off the field, his time in New York and New Jersey were critical to him. He is currently in the Hall of Fame at Fair Lawn High School and cites his time at Columbia, where he was a mathematics major, as one of the most influential periods in his life in being surrounded by bright classmates, several of whom are still his friends to this day. 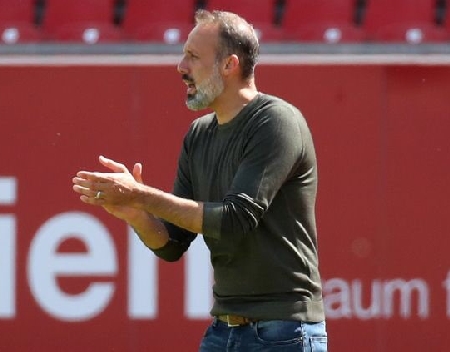 He had the potential to use his degree right out of college with options in the financial sector, but instead opted to chase a playing career in Germany. That has paved the road to where he is now.

“I just kind of felt it's what I needed to do,” Matarazzo said of pursuing a soccer career right after Columbia. “It was always knowing that at some point, if it doesn't work out, then I'll return and maybe use my college degree to get a get into the corporate world and then get a normal job.”

“After my playing career ended, I contemplated returning back to the states,” he added. “While I was getting my coaching licenses, I realized how much I enjoy what I'm doing and I decided I would return to the states when I stopped moving forward up the coaching ranks. There was the plan at some point to return and use those European licenses to start a coaching career in the States. I just didn't really stop moving forward yet. That's why I'm still here. I enjoy what I'm doing, and I'm happy I'm here.”