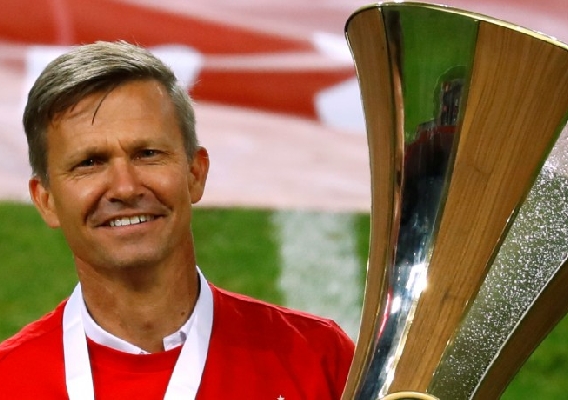 With every passing week, there is more and more soccer to talk about and for the first week, we get to move beyond Germany in our weekend abroad recap. ASN's Brian Sciaretta starts with some Americans abroad history in Austria while also analyzing the weekend in Germany and Denmark.
BY Brian Sciaretta Posted
June 01, 2020
7:10 AM

THE WEEKEND brought significant news for Americans abroad both inside and outside of Germany. With leagues such as Denmark and Austria restarting, the weekend abroad became more full than it has been.

Here is a recap on the top stories.

The restart of the Austrian season from COVID-19 saw the Austrian Cup final take place Friday night between Red Bull Salzburg, managed by American Jesse Marsch, and second-tier side Austria Lustenau. The game itself was no contest as Salzburg coasted to a 5-0 romp in front of no fans.

Salzburg enjoyed a strong run through the tournament with his best win coming in the semifinals against LASK – a team it is currently in a close race for the Austrian Bundesliga title. Austria Lustenau, meanwhile, was an upstart lower-league team that unexpectedly reached the final and was the heavy underdog in that game.

Salzburg has had an interesting year. It sold a lot of players last summer prior to Marsch taking over. The team was on fire to start the Bundesliga season but struggled a bit in the second half of the season due to the sale of three key starters – including start forward Earling Halaand. A recent penalty to LASK, however, might have sent the club back into first place.

Congratulations to Jesse Marsch and Red Bull Salzburg on winning the Austrian Cup with a 5-0 win over Austria Lustenau. Marsch, the former #RBNY manager, becomes the first American born & raised manager win a major piece of silverware in Europe.

But the win in the Austria Cup is a massive triumph for Jesse Marsch who became the first American born and raised manager to win European domestic cup or league. Bronx-born John Caulfield won the League of Ireland title with Cork City 2017 although Caulfield was raised mostly in Ireland.

Marsch has done well in his first season as a head coach in Europe but the big test will be securing a league title.

The goals and shots haven’t been there for Josh Sargent since the Bundesliga restart but the St. Louis native had a big effort for Werder Bremen in a 1-0 win over Weston McKennie and Schalke on Saturday.

Sargent, 20, was a physical presence for Schalke where he won headers, pressed effectively, was instrumental in some moments of hold-up play, and drew defenders to him as he freed up teammates.

Managers are typically reluctant to change a winning formula, so Sargent should continue to start. Even more, Werder Bremen has a favorable schedule down the stretch with games against Eintracht Frankfurt, Wolfsburg, Bayern Munich, Paderborn, and Koln remaining. Of that group, only Bayern Munich is playing well. The bottom line is that Werder Bremen has an outstanding chance to survive what was once considered a tough relegation battle.

For Schalke, the situation is terrible although not dangerous. It won’t face a relegation battle despite it having coughed up any chance of qualifying for Europe. It has three goals in its past 1022 Bundesliga minutes and two of those goals came from Weston McKennie. It hasn’t won in 11 games.

This season it will likely finish outside the top 10 but safe from relegation. The question is what is the plan for the future. Is there confidence in American manager David Wagner? How can the team address its woeful offensive production?

As for McKennie, he’s is playing relatively well but there is only so much he can do on this team. He played 54 minutes in the loss and had some good moments but also looked tired. He has been trying to serve as a sparkplug on both sides of the ball but that has been impossible given the talent on the team.

While Wolfsburg had been playing well, had moved into the Europa League position of sixth, and was coming off a first-rate 4-1 win over Bayer Leverkusen, it was actually Eintracht Frankfrut who came away with the surprising 2-1 win.

Eintracht Frankfurt was coming off a thrilling rally in a 3-3 draw vs. Freiburg on Tuesday but still had just a single point from its previous five games. This was its first win in six Bundesliga games.

Playing as a right wing-back, Chandler was an effective physical presence in this game and he was tough defend. His crossing and long-balls were not very good but his athleticism makes him valuable on the field for Eintracht.

As for John Brooks, his numbers reflected a steady games and he was not at fault for either goal.

In the 2.Bundesliga, Arminia Bielefeld is comfortably in first. Following them, there is a tight three-team race for the next two places with second place earning automatic promotion, third place going to the promotional playoff game with the 16th place finisher in the Bundesliga, and the third place team staying in the 2.Bundesliga next year.

On Sunday, VfB Stuttgart maintained its grip on second place with a 2-0 win over last-place Dynamo Dresden. Pellegrino Matarazzo is attempting to become the first American born and raised manager to earn promotion out of the 2.Bundesliga and manage in the Bundesliga.

But it won’t be easy. Third place Hamburg won its game vs. Wehen Wiesbaden 3-2, and fourth place Heidenheim downed Erzgebirge Aue 2-0. As a result, everyone remained in their respective positions. Stuttgart is only two points ahead of Hamburg and three points ahead of Heidenheim. Stuttgart next faces Osnabruck on Sunday.

There was some hope that Gio Reyna, 17, was going to earn his first Bundesliga start on Sunday for Borussia Dortmund against last-place Paderborn. The American did not start, but came off the bench in the 80th minute with Dortmund up 3-1.

As it turns out, Reyna was on the field for three Dortmund goals en route to a 6-1 win. He did not score or assist but was part of the build-up to the team’s final goal.

His numbers show he was active

Reyna is in a great position these days and the club is bringing him along nicely. His first start will come sooner than later and he is making the most out of the minutes he had.

The Danish Superliga became the next league to resume play and two Americans were in action on Monday when Hobro defeated Randers 1-0. Two U-23 eligible Americans in Christian Cappis and Emmanuel Sabbi went the distance in the win.

The win was against the run of play but Hobro found a way to get the three points in the midst of its uphill relegation battle. The team now has to hope for Sonderjyske to lose to Brondby on Wednesday.

It was the first slate of games in Germany’s 3.Liga over the weekend and two Americans factored in goals.

United States U-23 central defender Chris Richards scored an 89th minute winner for Bayern Munich II vs. Ingolstadt when he headed home a short-range cross from close range. It was the third win in a row for 5th place Bayern Munich II.

Former U.S. international Terrence Boyd came off the bench and assisted on the last goal of the game for Hallescher FC in a 4-2 loss to 18th place Preußen Münster. With the loss, Hallescher fell into the relegation zone on goal differential.

In other news this weekend,

Alfredo Morales and Fortuna Dusseldorf were completely outclassed by Bayern Munich by a 5-0 score. Little was expected of Fortuna in this game but its relegation battle now became even more intense as Werder Bremen kept winning.

Julian Green started and went 84 minutes for Greuther Furth in a 1-1 draw with Darmstadt. Furth equalized in the 87th minute. German-American Timothy Tillman came into the game in the 66th minute for Furth. Green had 1 shot, 3 key passes, an 88% pass completion, was fouled 3 times, was 2/8 in accurate crossing, and 4/3 in accurate long balls on the day.