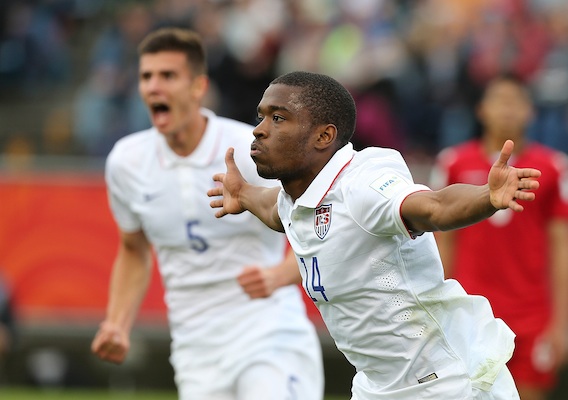 Things are starting to look up for the 19-year-old forward who scored a goal for the U.S. in the first game of the U-20 World Cup but then suffered a broken toe that turned him into a spectator.
BY Brian Sciaretta Posted
July 29, 2015
10:15 AM

FOR MANY YOUNG PLAYERS the U-20 World Cup is a wonderful chance to be seen by scores of scouts from top leagues. Sometimes players make moves immediately following the tournament; at other times successful players are first noticed at the World Cup only to make moves months later.

Last week the first player from the U.S. squad secured a new deal when forward Maki Tall signed with FC Sion of the Swiss Super League.

Tall, 19, had just completed a contract with Lille of Ligue 1 and spent the 2014-15 season on loan with Red Star. He had several options but decided to sign with Sion for a variety of reasons—including the fact that the team will compete in the Europa League this season.

“FC Sion showed interest in me soon after the U-20 World Cup and the club expressed willingness to sign me quickly despite my toe injury,” Tall said. “Also, FC Sion is a very good club. They have won the Swiss Super league twice and the Swiss Cup 13 times.

“My agents told me of the interest of several clubs in France, the UK, and the Netherlands but none of them showed the same desire as FC Sion. In addition, they have a roster of very young players. I feel that I will get some playing time if I perform and train hard.

“At this stage of my young career, it is the best fit for me.”

Born in Washington, D.C., Tall was raised predominantly in France and made multiple appearances with both French and Ivory Coast youth national teams. It was only in March when he made the decision to represent the United States after receiving a call-up from Tab Ramos.

After a few spring camps, Tall was named to the World Cup roster and started the opening game against Myanmar. Tall was the most threatening American player in that contest and scored a first-half goal. But his tournament came to a crashing halt when he suffered a broken toe shortly after the break and had to leave the game.

The recovery has gone well but Tall still has work to do. He feels great physically and says the plan is to have pins taken out of his big toe next week. He then hopes to begin playing in three to four weeks, at which point he can begin practicing with the first team.

The positive news on the professional front will help Tall deal with the disappointment of missing most of the U-20 World Cup. His new teammates helped with that too.

“I was really sad to leave the team but injuries happen in soccer,” Tall said. “Too bad it happened during the first game of the World Cup at a time when I was really in great form. It was not an easy period for me personally but I got a lot of support from my teammates and the coaching staff.

“I also got a lot of encouraging messages from fans all over. I even got a message from Didier Drogba. That was a real morale booster. As for my time with the team, it was fantastic. I just wish it lasted a little longer. I became friends with everyone on the team and felt really welcome despite joining the team only a few months earlier in March.”

In addition to pushing for Super League and Europa League playing time with Sion, Tall is targeting a spot on the 2016 U.S. Olympic team.

“It is a top priority for me,” Tall said of the U-23 tournament. “I want to represent the U.S. at the Olympics so I will work very hard in my club so I can get a good look from the coaching staff when the time comes.

“It is going to be exciting. We are all competitors and we do want to be part of the group that will represent the U.S. at the Olympics. But there is a lot of work ahead.”

Looking back at the U-20 World Cup—most of which he experienced as a spectator—Tall remains impressed with the talent on the American squad and believes it has a high ceiling.

“The team was very well coached,” Tall recalled of the U.S. U-20 team. “There is also a lot of individual quality in this team. I really think a few of my teammates could become world-class players in a few years.

“With a bit of luck this team could have gone all the way. Keep in mind that the team only lost in the quarterfinals on a penalty shootout against Serbia, which eventually won it all. The potential is huge. Most of the players are already playing in top leagues across the world.

“I really see great things in the future if this team stays together.”