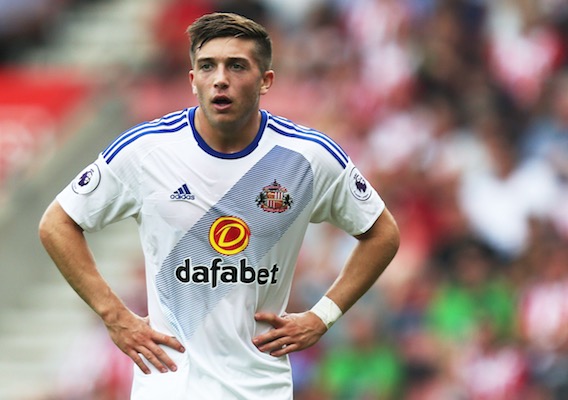 Lynden Gooch to ASN: "I Want to Play Every Game"

Lynden Gooch was cut from the United States U-20 World Cup team in 2015 and didn't get a sniff with the U-23 team that failed to make the Olympics—but here he is starting in the top league in the world.
BY Brian Sciaretta Posted
September 01, 2016
9:25 AM

THE FORTUNES of a young soccer player can change quickly—and Lynden Gooch is proof of that. Coming into this season, he wasn’t sure what to expect at Sunderland. After a loan to Doncaster last year, he returned to Sunderland over the summer to find a new manager at the helm, and more questions than answers.

As August comes to a close, however, Gooch has started Sunderland’s first three English Premier League games and its first cup match. He has earned accolades for his play and has put himself in the driver’s seat to become one of the top American players of his age group.

“Leading into this season, I would have been happy maybe starting a couple games this season or coming off the bench,” Gooch told American Soccer Now. “Now I’ve started [three] Premier League games and the cup game, I want to play in every game. I am hungrier now than I was before, now that I’ve gotten the taste of it.

“I always believed in myself,” he added. “I always knew I was good enough to play for Sunderland in the Premier League. 100%. And I’ve said that since I’ve been at the club. Obviously with this manager coming in, I’ve gotten some luck in that he likes young players but I think I’ve earned that luck with all the work I’ve put into it.”

Gooch, 20, made his debut in the season opener in a challenging game against Manchester City on August 13. He learned he was starting toward the end of practice the day before the game when new head coach David Moyes announced his name.

“He said my name and I couldn't believe it," the Santa Cruz, Calif., midfielder said. "It was a surprise but I was ready.”

Sunderland has struggled out of the gate with just one point through its first three games but Gooch has been one of the team’s better players and even was named his team’s best player in the loss to Middlesbrough in Week 2.

“What has come out of it is Lynden Gooch, he’s probably the one you’d say, well, maybe nobody would have put him in,” Moyes said. “He was on loan at Doncaster. He’s come in and actually looked as if he can play at this level. So you would say right away, there’s a real positive."

One of the reasons why Gooch has been able to help his team is because of his versatility. As a youth player, he often played forward and had a flair for the dramatic, scoring some incredible highlight-reel goals for Sunderland’s U-18 and U-21 teams.

As he matured, Gooch's coaches have played him in a variety of positions, including on the wing, where Moyes tends to use him. Against Middlesbrough he also shifted into a more defensive-midfield position.

“A lot of the coaching staff on the first team are the coaches I had with the U-21s and the U-18s—they know I can play other positions,” Gooch explained. “That's why you see me playing all over the place. The manager has coaching staff around him that know me really well.”

When Moyes moved Gooch into central midfield it was designed to get the American into a position where he can get a lot of touches and influence the game. Gooch prefers being further up the field in attacking positions but also understands that at this period in his career, he is happy to play wherever the coaching staff puts him.

“That's good to get a lot of touches,” Gooch said. “It's a big responsibility, obviously, in our team. We are playing good teams every week and we've been battling in relegation fights the past two years. For the manager to put me in that position last Sunday in the second half of the derby match, it showed he trusts me, even with me being a young player, to do that job and get the team going.”

Now that he is a Premier League starter, it will be interesting to see when, or if, Gooch gets a shot with U.S. national team. Gooch does not want to get too far ahead of himself after only playing a handful of games for Sunderland. He is also eligible for the English and Irish national teams and even once played for Ireland’s youth national teams in a pair of friendlies.

“I probably lean toward [the United States] more but at the same time, anything is open for discussion because I can never say no,” Gooch said of his present affiliation. “It’d be an honor to play for any of the three because that’s part of me and that’s my family.”

So far Gooch has struggled to establish himself on the international stage. He was on the 2015 U-20 team for World Cup qualifying but was cut by Tab Ramos for the U-20 World Cup later that year. He also never got a shot with the U-23 team that failed to qualify for the 2016 Olympics.

Gooch would not be the first American player to struggle with youth national teams only to be a standout with the full senior side. While he is yet to play for Klinsmann, Gooch is emblematic of a topic Klinsmann touched upon multiple times this year when he said that the 18-23 age group is a weak period for American players as they struggle to break into their clubs.

Klinsmann has said that it is not necessarily a lack of talent that causes players in this age group to fail: “We always tell them: talent is not even 50% of what you've got to do. The other 50% is more important than your talent. It's what you make out of it.”

While still a young player, Gooch has been with Sunderland since the age of 10—on a part-time basis before 2012 when he signed his first professional contract. He has seen firsthand what it takes to go from the low youth levels to the top, and he is in complete agreement that it takes more than talent alone.

Specifically, Gooch mentioned that he was fortunate that he found himself now under a manager like Moyes who will give young players a chance—something he feels will be harder to come by with the Premier League continuing to see more money flowing into clubs.

“I think you just have to keep working hard and doing what you’re good at,” Gooch said. “Hopefully someone will give you a chance.”

While Gooch has now made his Premier League debut, he is not the only young American player breaking through. Christian Pulisic had success early with Borussia Dortmund; Matt Miazga is with Chelsea; Emerson Hyndhan is pushing toward a Premier League debut with Bournemouth; and Rubio Rubin has used his time at FC Utrecht to earn chances with the U.S. national team.

Gooch is friends with Miazga and Hyndman and says it helps to have them in the Premier League with him.

“It’s nice to have those people in the country to have that sort of bond and know what everyone is going through. It’s everyone’s dream to be playing in the Prem—I think anyone growing up playing soccer dreams of playing here.”

And don’t expect Gooch to be one of the many Americans returning to the United States anytime soon. After making his way into the Premier League, he has plans on sticking around.

“For me, I always knew I’ve been good enough to play in the Prem,” Gooch said. “I’m very happy to be one of the few that is doing that.”