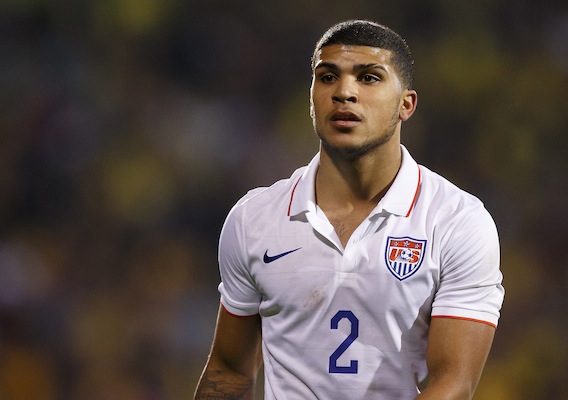 Like Jurgen Klinsmann, ASN's Brian Sciaretta is pumped up about the 2016 Olympics in Rio. Even though the games are 18 months away, he has put together a proposed roster for the U-23 tournament.
BY Brian Sciaretta Posted
January 06, 2015
10:56 AM
ON FRIDAY JURGEN KLINSMANN said that one of the top priorities of 2015 is to prepare the 2016 Olympic team, adding that 8-10 Olympic-eligible players will be on the roster for the U.S. national team's January camp. The 2012 team's failure to qualify for the Olympics was a major embarrassment—one which U.S. Soccer desperately hopes to avoid again. So I thought I would far ahead and try to project what the 2016 Olympic team might look like. Before I reveal my roster, some caveats are in order: It's important to note that Olympic qualifying and the Olympics are completely different animals since qualifying does not fall on FIFA international dates. Because of this, it's primarily up to domestic and Mexico-based players to get the United States to Rio. Even in 2012, the team that failed to qualify did not have players like Jozy Altidore, Timmy Chandler, and Danny Williams—who were all earning minutes in Europe and therefore not released. Second, in Olympic qualifying there are no overage players allowed, whereas in the Olympics, three are allowed. Without looking at qualifying since it is impossible to know who will be in Europe and who will be in MLS, let's look at a hypothetical team should the United States advance to the games in Rio de Janeiro. Another caveat: When trying to predict the United States' three overage players, it's important to note that in the summer in 2016 there is also the Copa America Centenario—a high-profile tournament that will potentially feature some of the best players in the world. My Olympic prediction assumes that the best U-23 players will head to Brazil and the overage selections will consist of players who are fairly replaceable on the first team. Another consideration: I am placing a high value on versatility. Due to the small Olympic team roster—18 players—the ability to play multiple positions is particularly useful. Having said all of that, here is my first (but surely not last) projected U.S. Olympic roster.

IN THE MIX: Jon Kempin, Zach Steffen, Ethan Horvath Whenever the U.S has qualified for the Olympics, an overage keeper has always been utilized. Brad Friedel got the call in 2000 as did Brad Guzan in 2008. Tim Howard would be an ideal pick as Guzan could start in the Copa America Centenario and begin his ascent as the team's No. 1 backstop. Howard could lead the young team and help settle the backline. It would also be a nice feather in his cap since he was relegated to the backup role at the 2000 Olympics behind Friedel. Cody Cropper has been involved with the U.S U-20 and U-23 teams and is very familiar with the setup. Playing behind Howard would give him an extended opportunity to learn from one of the greats.

3) John Brooks
4) Erik Palmer-Brown
5) Shane O’Neill
6) DeAndre Yedlin
7) Greg Garza (overage)
8) Kellyn Acosta
IN THE MIX: Cameron Carter-Vickers, Walker Zimmerman, Will Packwood, Matt Miazga, Tyler Turner, Shaq Moore, Eric Miller, Juan Ocegueda Central defender John Brooks and right back DeAndre Yedlin will enter into the Olympics with terrific experience at the U-23 level. Both are veterans of the World Cup and Yedlin will possibly have a good amount of games in Europe under his belt by 2016.

Left back will most likely go to an overage player and Greg Garza seems like the best bet. He is familiar with U.S. soccer at every age group and has now broken into the full national team. As a Liga MX regular, he would bring much-needed experience to the team at a position that has been an Achilles' heel seemingly forever. Shane O’Neill and Kellyn Acosta are two of the more versatile players in the pool. Acosta can play either fullback position or in the midfield and O’Neill too can play central defense, right back, or in the midfield. Erik Palmer-Brown is rated very highly by U.S. Soccer and is actually eligible for the 2020 Olympic team. Cameron Carter-Vickers is another player who could make his way onto the team but like Palmer-Brown, he is also eligible for the 2020 Olympics as well.

One potential weakness in the midfield is the lack someone to provide size or physical play. There is no apparent Jermaine Jones, Michael Bradley, Kyle Beckerman, or Maurice Edu who can break up plays and help shield the backline. Using an overage player—perhaps Beckerman?—to fill that role is not out of the question.

16) Rubio Rubin
17) Tommy Thompson
18) Terrence Boyd (overage)
IN THE MIX: Jordan Morris, Andrija Novakovich, Ben Spencer, Amando Moreno, Zach Pfeffer, Omar Salgado, Alonso Hernandez, Bradford Jamieson IV Rubio Rubin is an obvious pick as one of the best teenage prospects in the game. His experiences at Utrecht will only help him grow from now until 2016. Tommy Thompson is also versatile and dynamic, and he possesses the ability to take players on with the dribble. It also makes sense to use the third and final overage player in the forward spot with a capable goal scorer, and Terrence Boyd fits that bill. As a player who loves to represent his country but one who has fallen just short of being a full national team regular, Boyd would be a smart choice for the Olympics. He finishes well and his sizeable frame could prove effective against mostly younger defenders. Jordan Morris is also in strong contention for a roster spot after a pair of full national team call-ups, but his recent decision to stay in school for his junior year is only going to make it more difficult for him. He now will remain an amateur until 2016 and if he signs with Seattle, his first professional games will not come until just a few months before the Olympics. He is a very good player, but when looking at the timeframe of the Olympics, he will be matched up against multiyear professionals and many that also have U-20 World Cup experience to boot.

Andy Herzog
While there is no Olympic head coach as of yet, Herzog is the most obvious candidate at the moment. Klinsmann will likely be too busy with the Copa America Centenario that summer and Tab Ramos has already said he is not a candidate for the role. Herzog openly stated that he wanted the Olympics job during a 2014 interview with Austrian media and it only makes sense with his familiarity with Klinsmann and U.S. Soccer. He has a solid resume of working with young players—he served as Austria's U-21 head coach—and would maintain continuity with Klinsmann's vision for U.S. soccer. So that's my 18-player Olympic squad—what do you think? Please share your comments below. Brian Sciaretta is an American Soccer Now columnist and an ASN 100 panelist. Follow him on Twitter.