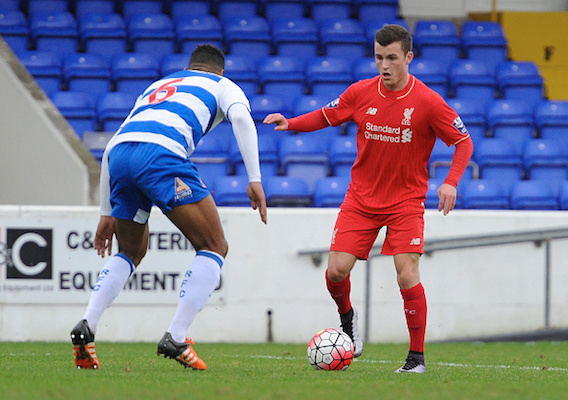 The 18-year old striker from Arizona is part of an American Invasion of Europe that features young, ambitious Yanks seeking to establish themselves at some of the biggest clubs on the planet.
BY Brian Sciaretta Posted
April 20, 2016
8:50 AM

YES, BROOKS LENNON plays at Liverpool. Yes, his dad’s name is John. No, there’s no relation—but there is a bit of irony.

After all, for all his coincidental links to the British Invasion, Lennon these days is helping head up a movement in the opposite direction: of young Americans trying to make their mark on Europe's most prestigious clubs.

"My goal is to make the tour with the first team this summer” in the U.S., Lennon told American Soccer Now. “But next year my goal is to be practicing with the first team every single day, being the leading scorer for the reserves, and obviously trying to make my first-team debut next season. I have some goals that are going to be tough to reach, but I am going to work hard to reach them.

“Next year I definitely think I can be a person who makes my debut."

That Lennon is at Liverpool at all, let alone within potential reach of first-team minutes, is “a weird story,” as he puts it, and it’s hard to disagree.

As a sophomore in high school, and with an extra week to kill ahead of a scheduled trial at Aston Villa, Lennon and his father traveled to Liverpool to meet up with good friend and fellow American player Marc Pelosi, and from there the wheels began to turn. While watching Pelosi in a reserve game, Lennon began talking with the head of Liverpool’s academy, who in turn invited him to train with the club and play in a youth-team friendly the next day. Two goals later, he canceled his trial at Aston Villa.

Lennon went on to have an extended stay at Liverpool, but his age, coupled with his foreign status, stymied any signing. It was only the following summer, when he secured an Irish passport through a grandparent, that he was free to return to England for good—albeit not with the club for which he had originally set out to play.

“We’ve had to be very patient, as have Brooks and his family, to finally get his paperwork and the documents to come over,” Liverpool U-18 coach Neil Critchley said at the time. “A lot of people have put a lot of work into it and we are delighted he is here. He’s been working extremely hard and he is a very focused individual. Brooks has good talent and he’s a got a good character as well, a good personality.”

Lennon, 18, playing primarily on the wings but also a bit at center forward, made his debut with Liverpool’s U-21s on Dec. 21, going on to post one goal and one assist in five appearances to date. He has already gotten a few invitations to train with the first team as well, something that he says has only motivated him further.

“It's a great experience to train with the first team because they're great players,” he said. “Pretty much everyone on the first team is someone that works really, really hard...it's humbling, but I'm definitely not a tourist when I'm there. I am trying to make a name for myself.”

He has good company in that respect.

Christian Pulisic scored his first Bundesliga goal for Borussia Dortmund on Sunday; Erik Palmer-Brown is starting for FC Porto B on loan in Portugal’s second division; and Cameron Carter-Vickers is a prized prospect at Tottenham.

Where they’re "headed" could be promising. It’s true that Tab Ramos hasn’t had the results he’s been looking for in the first seven months of the new U-20 cycle, but the reality is that he hasn’t yet had the core of his team together.

If Ramos can assemble his top pieces for the 2017 U-20 World Cup in South Korea—if he can combine the talent above with the likes of Arsenal’s Gedion Zelalem, Villareal’s Mukwelle Akale, Fiorentina’s Joshua Perez, Fulham’s Luca de la Torre, and Manchester United’s Matthew Olosunde—there’s a quiet confidence among this group that could prove formidable.

And the rest of the world may catch on to this American Invasion sooner rather than later.

"I think we have the players to do it.”