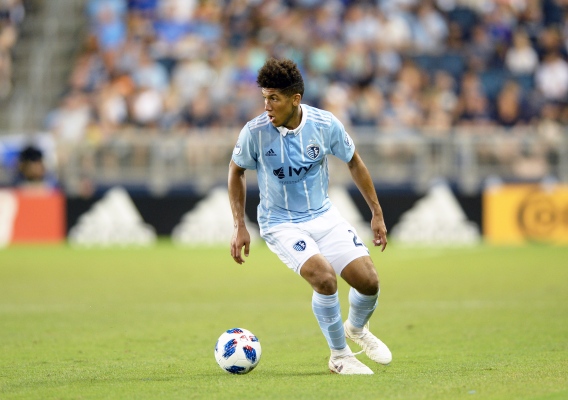 Lindsey on the rise with Sporting KC, bringing youth to a veteran backline

In 2018, Sporting Kansas City head coach Peter Vermes has mixed youth into the team’s veteran core and Jaylin Lindsey, 18, has led the way, featuring at left back. Brian Sciaretta spoke at length with the 2017 U-17 World Cup veteran about his breakthrough and his plans for the future.
BY Brian Sciaretta Posted
July 16, 2018
7:00 AM
OVER THE PAST six years, Sporting Kansas City has been successful in large part due to a core group of mostly defensive players that has grown together and established a high level of chemistry.

Ike Opara, Matt Besler, and Seth Sinovic have comprised the team’s backline for years and made it one the league’s best units. Graham Zusi often played as a right back in recent years to only add to an experienced defensive presence.

But with the experience also brought age and it was clear the team was going to have to get younger at some point and head coach Peter Vermes had stated over the years that he wanted to introduce young and internally produced players. The club had invested heavily in its academy and facilities but when would that start translating into regular first team starters?

Jaylin Lindsey, 18, has been one of first players to break through with Sporting this season and the youngster has not looked out of place at fullback, where he has already made eight starts across all competitions for a total of 645 minutes.


Jaylin Lindsey's not even left-footed. Gonna see a lot of him at both RB and LB for the US U-20s real soon. #SKCvTOR pic.twitter.com/cSvisXdmrV

“It's a lot different to the first team, not in the style of play but in the intensity of the game and how 90 minutes go in an actual match,” Lindsey told ASN. “From my perspective, in my first five games, I feel like I've done pretty well. I've gotten my fitness up and gotten used to the guys and I feel like I've done really well so far with that.”

In his development, Lindsey spent most of his time at right back and that is where he played for the U-17 national team at last year’s World Cup. But so far this season, Vermes has moved the North Carolina native Lindsey to the left side despite being right-footed. When asked, Lindsey is quick to point out that he has “no preference” for either side of the backline.

Lindsey also says that he has a lot to learn, but walking into a backline that has played together for years has not been among the difficult challenges. Instead, he has found a lot of support among the veteran core.

“It's been good,” Lindsey said. “Besler and Ike, they're guys that have been with the national team and been in this league so long, they're teaching us the fundamentals of the game on the defensive guys. Even the guys on the attacking side like Roger [Espinoza] and the guys up top, they're teaching us every day how to go get better and better. It's getting to the point where they want us to be better than them at the pro level at their age.”

“Besler and Zusi have played with the national team and played in the World Cup,” he added. “Every single day they are giving me a tip so that I can get better each day. I love getting advice from them and I hope they keep giving it to me.”

Vermes has been quick to praise Lindsey and fellow teenager Wan Kuzain, 19, who have handled the transition to the first team well. He also said that he is monitoring their workload not just due to the physical toll the games take, but also the mental side. But so far he is happy that the players have responded and that Sporting has remained in the playoff push in the process.

Looking forward, Lindsey has a lot more ambitious goals in the future for both club and country. He could potentially fit into the U.S. U-20 team under Tab Ramos with World Cup qualifying mere months away. For club, he wants to both help Sporting Kansas City win and eventually join the growing number of young American players plying their trade overseas.

Top young American players these days find themselves at career crossroads earlier than ever and Lindsey is no exception. The U.S. U-17 team last year featured players who had a wide range of opportunities during the cycle. Some like Josh Sargent moved overseas while others like George Acosta moved to South America.

Lindsey had interest from Europe but took a risk and signed with Sporting Kansas City last September and joined the likes of Chis Durkin at DC United and Andrew Carleton at Atlanta United. For him, it gave him an opportunity to play for a defensively strong team that needed to get younger. So far, everything has gone according to plan.

“It's just the culture here, honestly,” Lindsey said of why he chose to sign for Sporting. “I knew coming in here they were a big defensive team. I felt coming in here, I would learn the defensive side of the game and just get my game better. I went to games here and watching the style of play, the field, the facilities, and the fans - it was just amazing. And when I first came here, Erik Palmer-Brown was here at Sporting and watching him go from the academy to the first team was just awesome. I like the culture here and how everybody is just committed to winning, it's a special club.

“For me, going abroad was an option,” he added. “I had a couple clubs that were interested in me but, for me, I wanted to stay domestic first. I can get pro minutes here and get used to the game. At some point I want to go overseas and try it in a different culture in a different environment.”

The United States U-20 team is currently assembled in North Carolina and Lindsey is not with the team due to his involvement with the first team at Sporting Kansas City. With World Cup qualifying taking place in November, Ramos has said that it will be tough to get players released for the tournament.

If Lindsey continues to start for Sporting, he might not be able to take part due to his likely involvement in the MLS playoffs. Still, getting back to that stage and playing in another youth World Cup is a high priority for him.

“It's my goal to make it to qualifying but I don't have my eyes on it,” he said. “I am just trying to focus on my game and doing well each and every game for the first team and we'll go from there. I want to get that starting spot at left back here. When it gets closer to qualifying, I'll have my eyes on that.”