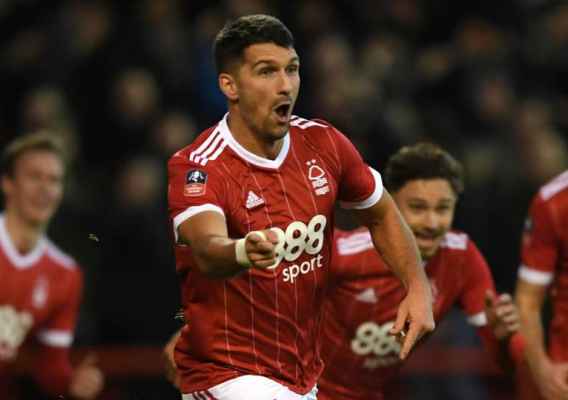 Eric Lichaj sent Arsenal out of the FA Cup with a two goal performances with his second strike a jaw-dropping goalazo. Elsewhere, Shaq Moore plays at the Nou Camp, Emerson Hyndman gets on the field for Bournemouth, and a lucky strike from Danny Williams keeps Huddersfield FA Cup hopes alive.
BY Brian Sciaretta Posted
January 08, 2018
9:00 AM
The dominating news on Monday is the disappointing news surrounding Jonathan Gonzalez and the release of the January camp roster. Still, this weekend abroad brought some pretty good news from across the Atlantic Ocean.


Without a doubt, the story of the day among Americans abroad was Eric Lichaj who scored Nottingham Forest’s first two goals en route to a 4-2 win over Arsenal in the third round of the FA Cup. The Chicago native sparked a stunning upset over the Gunners in what was likely the best game of his career.

Lichaj, 29, opened the scoring when he headed home a free kick delivered by Kieran Dowell.

But his best effort was in the 44th minute for team’s second goal. His volley was poorly defended by exceptionally well taken and will likely turn out to be one of the best goals scored at this year’s FA Cup.

Following the game, Lichaj told the media that while he was thrilled with the brace to down Arsenal, he came up short in one regard. His wife promised him that if he scored a hat trick this season, she would let him get a new dog. In predictable funny fashion, Nottingham Forest fans rose to the occasion and tweeted at Lichaj’s wife to allow him to get a dog anyway.

Moore gets the Camp Nou start

After not playing the past month, Levante’s American fullback Shaq Moore was given a very difficult assignment on Sunday when he earned the start at Nou Camp against Barcelona.

Barcelona had little problems in a normal 3-0 win but Moore was one of Levante’s best players on the day where he held his own defensively. But in the 64th minute he nearly scored in one of soccer’s greatest grounds when his close range shot was denied by Marc ter Stegen.


Shaq Moore sees his name in lights, but shutout merchant @mterstegen1 has other ideas. #BarçaLevante ???? pic.twitter.com/8ejCdb5fFm

The United States national team will need fullback depth behind DeAndre Yedlin and Moore has emerged as a likely candidate.


Hyndman gets a rare start

One surprising start over the weekend came from 2015 U.S. U-20 captain Emerson Hyndman who has found playing time extremely hard to come by this season at AFC Bournemouth. After a productive loan last spring at Rangers, Hyndman returned to his Premier League club where he has played with the reserves.

But Eddie Howe gave Hyndman a start on Saturday in the FA Cup against Wigan Athletic and the Texan got off to a very poor start scoring an own goal in the 29th minute to give his team a 2-0 deficit. In the first half, Hyndman received harsh criticism from the announcers and local media.

But that turns out to have been perhaps due to rust. Hyndman improved and played well in the second half as Bournemouth rallied for a 2-2 draw which forces a replay.

Keaton Parks continues to be one of the most interesting stories in American soccer after never having been part of the Development Academy or seriously a part of U.S. youth national teams. Despite that, he has continued to progress upward at Benfica and is now on the first team for the Portuguese giants.

On Sunday the native of Plano, Texas played the entire second half of Benfica’s 2-0 road win over Moreirense. Parks played in a more withdrawn role in the midfield than he typically does and looked decent, even if he wasn’t spectacular.

What is good about Parks is that Benfica continue to show a lot of faith in him and Parks is making very few mistakes. Playing time is hard to come by at Benfica but Parks has put himself in a good situation moving forward.

In Saturday’s FA Cup tie between Bolton and David Wagner’s Huddersfield, two Americans featured as Danny Williams started for Huddersfield and Antonee Robinson started for Bolton. Late last week, it was announced that Robinson’s loan from Everton to Bolton had been extended until the end of the season. Robinson had impressed in recent months and helped the club climb out of the relegation zone.

But Robinson and Bolton were eliminated from the FA Cup and it was Williams’ goal in the 52nd minute that sank its chances. On the play Williams took a 30 yard shot that took a big deflection along the way and gave Huddersfield a 2-0 lead. Bolton would score one more but fell 2-1.