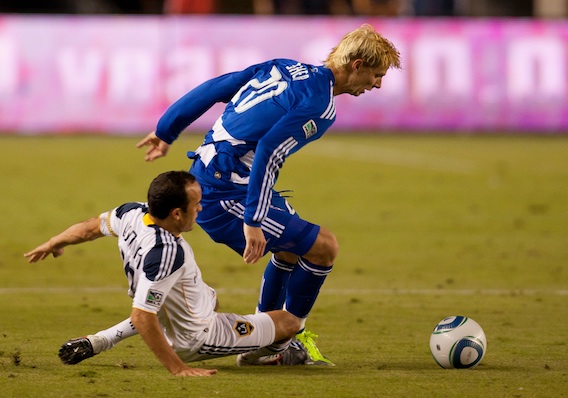 Donovan and Shea Ruled Out of Upcoming WCQs

Two of the biggest American stars are returning to their clubs after medical evaluations prevented them from playing against Antigua & Barbuda and Guatemala. So what now?
BY Noah Davis Posted
October 09, 2012
1:29 PM

Landon Donovan and Brek Shea, who both had injury concerns before Jurgen Klinsmann announced the United States national team roster for the upcoming World Cup qualifiers, will miss the games against Antigua & Barbuda and Guatemala with a knee injury and an abdominal strain, respectively.

Neither player will be replaced.

"It’s unfortunate for Landon and Brek that they won’t be able to play," Klinsmann said in a release announcing the news. "Landon was very optimistic over the weekend when his knee was feeling much better, but now he needs time to recover. We knew Brek was a question mark coming in, and now we have a clear picture of where he stands. We feel confident that the group we have will get the job done."

The news could be worse, but this is a blow to the team that likely needs four points to qualify for the Hexagonal round.

Who's in your Starting XI now? No, seriously, we want to know. We really have no idea what Klinsmann will do now.