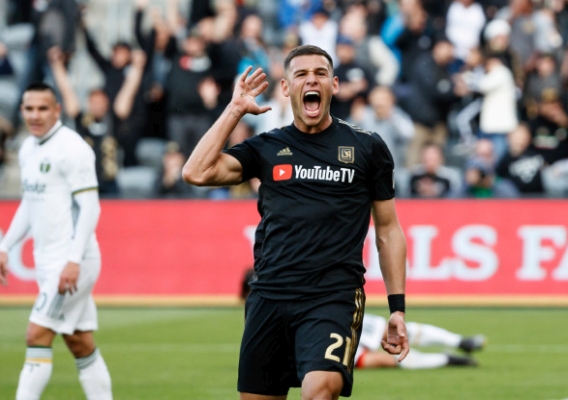 After the first two weeks in MLS there are some interesting surprises. De Boer is struggling as is USMNT hopeful Nick Lima. LAFC is fun to watch as is Paxton Pomykal and Kenny Saief. ASN's Brian Sciaretta breaks it all down
BY Brian Sciaretta Posted
March 11, 2019
10:55 AM
THE SECOND week of the 2019 MLS season is now in the history books and there is a lot to digest from the league’s opening start. What is particularly interesting is that there really isn’t much of a grey area. The good teams look really solid. The bad teams are just bad.

Don’t misunderstand. MLS remains really hard to predict but the quality seems to rise to the top fairly easily. For one, it’s hard not to see LAFC as being really strong to start the year. It’s also not hard to see that the Philadelphia Union has problems. There is also a lot of murky teams that could go either way.

The games this weekend were not as good as the first week and there wasn’t all that much drama as none of the top teams faced each other. But there was still a lot to take in.

Here are some of my thoughts from Week 2.


Even while both of its first two games have come at home and the club hasn’t had to take its show on the road yet, Los Angeles FC looks like a team that really should compete this year. On the heels of a 2-1 win over Sporting Kansas City, LAFC won its second game easily over Portland by a 4-1 score.

Bob Bradley’s team right now has all the tools to be good and is really fun to watch. Carlos Vela might be the best player in the league and Diego Rossi is also a vital playmaker. Then you combine two different forwards in Christian Ramirez and Adama Diomande, it becomes an attack that is difficult to stop. The club also is going to get better when Andre Horta finally gets healthy. The backline, meanwhile, is solid.

Atlanta United might be down, but LAFC is probably the most entertaining team to watch right now.


There are a lot of players who are in the running for this. Gyasi Zardes scored two goals for the Crew. Christian Ramirez looked solid for LAFC. It was a great weekend for goalkeepers as Bill Hamid, Sean Johnson, and Tim Melia all played very, very well.

Pomykal’s assist to Bryan Acosta was the goal of the week – for both the assist and the goal.


It is one thing for a new coach to implement his own style. But when a coach inherits a winning team, it is a little bit different. Most coaches that inherit a championship team tend to stick with what has been working and then implement his own ideas over gradual period of time.

De Boer inherited a very talented Atlanta team that likes to run free and beat everyone with its superior talent. De Boer has tried to force a rigid system on a team that is about as unrigid as it gets. In addition to bad results, the team is bound to get frustrated very quickly.


When you compare de Boer’s hire with the hire of Chris Armas, who also inherited a good team, the difference is stark. Yes, Armas came from within the system from Jesse Marsch but he also has his own ideas that he is gradually putting into place. De Boer is taking a wrecking ball to a winning formula? Why?

When all is said and done, I do think Atlanta will make the playoffs again and will not be like Toronto last year. There is simply too much talent and too great of a home field advantage. The bottom of the Eastern Conference is so bad that the team will figure out a way to make points.

But De Boer appears to not appreciate what a phenomenon Atlanta was last year. Saying the fans were spoiled with results (which he did in the press conference following the game) is not the right approach because the team has the talent to get satisfactory results. Following the loss to Monterrey in the Champions League, de Boer echoed Jurgen Klinsmann with his response that the Mexican league has more history (which it does, but so what?) and that American kids go to college and Mexican kids play soccer in the street – a statement/excuse that seems to be both irrelevant and vastly outdated.

De Boer could change things around, but he’s off to a bad start.


Kenny Saief is now with Cincinnati on loan and the U.S. international made a strong first statement against the defending champions Atlanta with an outstanding assist to help the club win its first ever point.


What a ball from #USMNT left mid Kenny Saief. https://t.co/6NFUNdlaX5

Saief is a very good player who has had an unlucky run with injuries. He is at Cincinnati to get his career back on track. This is another area where MLS can be valuable on the American soccer landscape.

When healthy, Saief has one of the best left foots in the entire U.S. player pool. While he’s not fast, he plays hard and has good vision.


Minnesota is one of the best surprises to start the year. Two road games in the first six weeks has yielded six points. After a 3-2 win over Vancouver, the team handled San Jose easily by a 3-0 score.

While neither of the opponents were playoff material, road wins are important regardless. Darwin Quintero, in particular, has been the best player of the first two weeks.

Head coach Adrian Heath was the best in his response to the team’s strong start, pretty much trashing the rosters of the first two years.


After winning two straight, I asked Heath what’s different this year than years prior. He didn’t hold back, #MNUFC: pic.twitter.com/Jde6GZhko9


Unfortunately, one of the more disappointing stories of the opening two weeks has been Nick Lima. After a very strong January camp and positive training stint with Hertha Berlin (which ASN heard went very well), Lima has not started off the season well for San Jose – which does not look improved from last year’s terrible run. Quintero had a field day going at Lima all day on Wednesday.


Jeremy Ebobisse, 22, is an interesting situation and an important marker for Portland whether or not it is serious about development. The likely starter for the U.S. U-23 team for qualifying, Ebobisse is still raw but watching him at the end of last season and the start of this season, you can see there is an upside. He needs a lot of work, but will Portland show the willingness to work with him and give him the minutes to address his flaws.

Sadly it doesn’t look as if it is the case because Portland is trying hard to sign a high-price, expensive center forward. Why? Because that is the default approach for too many teams. Portland’s problem is that it has conceded seven goals to start the season. Teams need to invest more in defense.

But more American forwards need to get on the field in MLS. If Ebobisse goes to the bench, it will be too bad.

Thus far, 29 players eligible for either the U.S. U-23, U-20, or U-17 national teams have played in MLS over the first two weeks of the season. That’s a very good number early in the season since a healthy number of youth players tend to emerge later in seasons once they get adjusted.

Pomykal has indeed impressed, but he has typically been one of the more highly regarded American teenagers in the league.

One of the better surprises so far, however, is U-23 eligible Aaron Herrera at Real Salt Lake. The left back has nailed down a starting spot and looks vastly improved from his days on the 2017 U.S. U-20 World Cup team where he did not look as if he was a top prospect. He has improved quite a bit.

Justin Rennicks also made his professional debut over the weekend and while his Revolution team lost to Columbus 2-0, Rennicks looked lively and promising. He has impressed this cycle with the U.S. U-20 team and looks ready to make the transition to the pro game.

Central defender Miles Robinson has been one of the bring spots for a struggling Atlanta team and he should be ready to move up to the U-23 team despite having been cut from the U-20 national team in 2017.

James Sands, 18, is also a very interesting story because he has never really been given much of a look by Tab Ramos despite having been on the 2017 U.S. U-17 World Cup team. As a defensive midfielder, he has started both of New York City’s games and has looked highly efficient, if unspectacular. Thus far he is playing more professional minutes in 2019 than anyone else in that position in the U-20 pool.