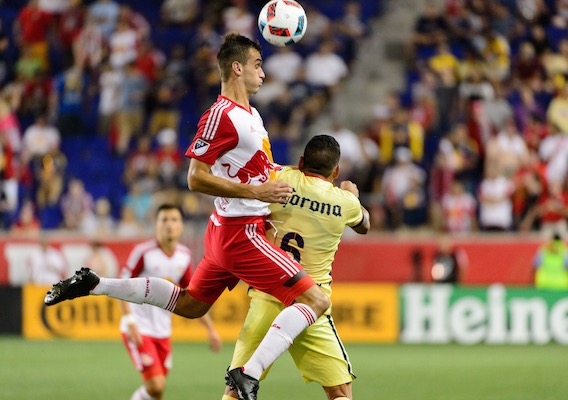 Only the diehard were on hand to watch the New York Red Bulls II defeat Louisville City FC in the USL playoffs last week. But those in attendance experienced a very special moment.
BY Brian Sciaretta Posted
October 14, 2016
11:15 AM

THIS HAS BEEN quite a season for the New York Red Bulls II. The club finished the regular season with the best overall record in the USL and produced several players who contributed significantly to the first team—which sits in first place in Major League Soccer’s Eastern Conference.

On Sunday, the Red Bulls II will host Louisville City FC in the semifinals of the playoffs.

The minor league club also provided one of the best moments of the season and you might have missed it if you weren’t paying attention. Last week the Red Bulls II faced the Rochester Rhinos in the Eastern Conference semifinals. The game was an entertaining affair that featured some back-and-forth soccer in front of a small but energetic crowd of 1,229 inside of a stadium that fits 25,000-plus.

Konrad Plewa, 24, was born in Poland but came to the United States to play college soccer for Seton Hall University in New Jersey in 2010. During that time, the midfielder also became affiliated with the New York Red Bulls academy, where he played for the club’s U-23 team in the NPSL. In 2015, Plewa signed a professional contract with the New York Red Bulls II and is now the team’s all-time leader in minutes played.

On July 30, the Red Bulls II lost an away game against the Richmond Kickers and then boarded a team bus back to New Jersey, arriving at 5am. Six hours later, Plewa started to lose feeling in his face and also in his arm. He was promptly rushed to the hospital where it was discovered he had a stroke. Doctors quickly performed surgery and had the blockage removed. He had never had any previous indications that he was at risk for a stroke.

He recovered well, although the underlying cause of a stroke in a 24-year-old professional athlete was alarming and there was no initial public statement from the Red Bulls organization.

On August 7, the Red Bulls’ first team traveled to Los Angeles to take on the Galaxy. Without public knowledge beforehand, the team’s starting lineup walked out onto the field wearing T-shirts with Plewa’s name as a sign of support.

Fortunately for Plewa, doctors determined that the cause of the stroke was a deficiency of Protein S, which prevents blood clotting. Even with regular treatment, however, Plewa had to meet with cardiologists and undergo consistent evaluation.

By late August, less than a month after the stroke, he was cleared to resume training. On September 4, he played in 2-0 away win over the Bethlehem Steel. But the best moment of his comeback came on Friday, in the biggest game in the brief history of Red Bulls II.

In the 109th minute, Rochester took a 3-2 lead on a goal from Wal Fall, the younger cousin of U.S. international Jermaine Jones. Red Bull II coach John Wolyniec called Plewa to come into the game with the season on the line. In the 119th minute, the Red Bulls II evened the score when Brandon Allen converted a penalty with one of the last last kicks of the game.

The contest then turned to penalties. Wolyniec called his team into a huddle to go over who would be the five Red Bulls players to take penalites. He looked at Plewa and told him he was going to take the fifth kick.

“After the game, before the PKs, I gave the guys the first five and Konrad's a guy I've known for a while now and you don't put someone in fifth place unless you trust them,” Wolyniec said. “I have a lot of trust in that guy.”

Through three rounds, each team was perfect from the spot. To start the fourth round, however, Rochester’s Steevan Dos Santos missed his shot over the bar. Dan Metzger, who won the equalizing penalty to save the season, proceeded to convert his attempt. Rochester’s Georgios Kyriazis converted to start the fifth round.

That left it to Plewa with one shot to win the game and send the Red Bulls II to the USL Eastern Conference Final. The crowd, which had all migrated to behind the goal, was aware of the significance of the moment for both the team—and for Plewa.

"I kind of just looked up to the sky and said, 'Please God, let me bring this home,'" Plewa said.

Plewa did not disappoint as he stepped up and hit a perfect and unsavable kicked that grazed the bottom of the crossbar and into the goal. The celebration was on.

"It's amazing," Plewa said after the game. "I've been through some stuff this year. To get to this point, it's indescribable. I am just enjoying the moment right now. I still can't believe how it went down.