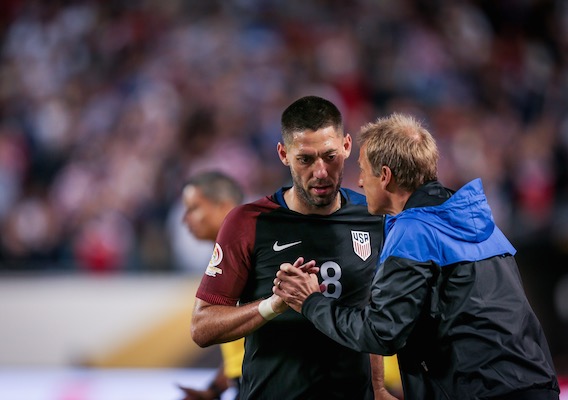 U.S. national team coach Jurgen Klinsmann is rarely commended for his tactical maneuvers and game management, but a key formational shift in the first half triggered the team's win over Costa Rica.
BY John D. Halloran Posted
June 08, 2016
12:00 PM

CHICAGO—In the lead up to this year’s Copa America Centenario, United States men’s national team head coach Jurgen Klinsmann yet again tinkered with the American formation, this time switching the team into a 4-3-3.

The move quickly produced some of the most aesthetically pleasing soccer of the Klinsmann era to date, leading many fans to wistfully reminisce about the coach’s initial promise to bring a more proactive style to the U.S. squad.

In the opening match of the tournament, against the No. 3-ranked Colombians, the coach stuck with the more aggressive lineup and claimed—despite the result—that the U.S. stayed with the talented South Americans from start to finish.

On Tuesday against Costa Rica, Klinsmann marched out the same lineup and formation, and the U.S.’ dominating 4-0 win over its CONCACAF rivals seemed to be another feather in the cap of the coach’s new-fangled 4-3-3. The Americans ran roughshod over a Costa Rican defense the coach had praised just the day before for being disciplined, compact, and difficult to break down.

Heading out for the second half in Tuesday’s match, and already holding a 3-0 lead from their first-half efforts, the Americans switched into a more pragmatic 4-4-2, picked up another goal, and cruised to victory.

However, in the post-game press conference, Klinsmann indicated that the team had actually abandoned the three-front and went to a traditional 4-4-2 only 30 minutes into the contest. And most interesting of all, when looking at a ticker-tape of the U.S.’ barrage of first-half attacks, most occurred between the 30th and 45th minute of play—immediately after the coach made the switch to a two-striker set.

In the 31st minute of play against Los Ticos, 33-year-old Clint Dempsey—who many had roundly criticized for his performance against Colombia—came alive, producing a succession of brilliant attacks. In an 11-minute span before the halftime whistle, Dempsey sprung his teammates for four wide-open gilt-edged chances, two of which his teammates converted for goals turning the tide of the game.

Best of all, the formula the U.S. followed to break down the Costa Ricans repeated itself over and over again, so closely that it resembled a training-day exercise. Dempsey would win the ball in the middle of the pitch, turn, and run at the center of the Costa Rican defense opening up space for his teammates in the wide spaces. He then provided the ball in the area to Gyasi Zardes, Jermaine Jones, and Bobby Wood with repeated chances to score.

Dempsey finished the evening with a goal and two assists.

After the match, citing a lack of numbers in the wide positions early in the match against Costa Rica’s 3-5-2, both Klinsmann and his players credited the switch to a two-front with opening up the game.

Zardes also credited his coach with making the right move at the right time.

“I always have faith in the coaching staff,” Zardes said. “We switched because Jurgen saw something that we didn’t. I thought it was a benefit.”

Klinsmann also pointed out that his central players made the move work seamlessly: “We went into a flat four in the midfield and it worked out perfectly. We communicated it with Michael [Bradley] and Jermaine [Jones] in the middle and they took care of it.”

Jones, like Dempsey, faced criticism from many fans after the loss to Colombia. Also like Dempsey, Jones is an aging player that some fans think the team needs to move away from using on a regular basis. Both veterans proved their doubters wrong on Tuesday.

Beyond Jones’ goal, he actively patrolled the pitch all game long. Typical for the enigmatic midfielder, he saved his best performance for when his team needed it the most.

“The goals came and they’re a confidence builder," Klinsmann said. "Some players really stepped up. Jermaine was definitely one of them today, putting his stamp on the game."

One other benefit of the formation switch was moving Wood into a more central—and comfortable—role. His excellent turn and finish late in the first half effectively sealed the contest for the U.S., but Klinsmann also made it clear that Wood has the freedom to drift centrally regardless of the team’s starting formation.

“Bobby had the freedom from the beginning [in the 4-3-3] to come inside, he was not meant to be a winger. He was meant to be up front with Clint.”

Klinsmann also pointed out that his team isn’t married to any one system and that it must adjust based on the opponent.

“The [formation] depends on our opponents as well. We don’t have the luxury to [play] the same against everybody. We need to modify things according to who we play against.”

With three points now in the bag, the U.S. looks forward to a match on Saturday with Paraguay (7pm ET, FS1, UniMas, UDN). Advancement to the tournament quarterfinals is on the line, something Jones is well aware of.