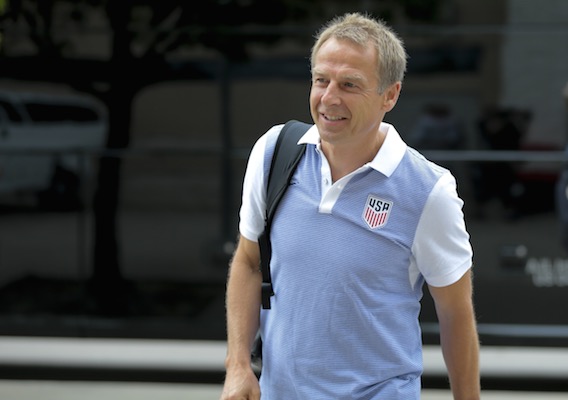 As the Americans begin final preparations for Copa America Centenario, the coach and several key players spoke about the energy within the team, evolving roles, and the growing excitement for Friday.
BY Brian Sciaretta Posted
May 31, 2016
9:00 AM

JURGEN KLINSMANN believes there is a positive spirit within the U.S. men's national team—and the timing couldn't be much better given that Copa America Centenario begins Friday night (9:30 pm ET; FS1, UniMas, UDN) with the U.S. hosting Colombia in Santa Clara, Calif.

“I think chemistry is really good,” Klinsmann said. “It seems that as a group that they have big ambitions. This is a very, very special tournament and they realize that. They realize that it's a once-in-a-lifetime opportunity to play this Copa America in the United States, and with every day I think they realize how big this tournament really is. So they're having a good time together. They're hanging out together, and the atmosphere is really good. We are fine tuning elements still. Every game helps you. Every training session helps you.”

“We don't have the luxury to say, ‘OK, we ignore what the opponent is doing. We just do what we want.’ That's not the case. We're not Brazil or Argentina. We're not Germany or Spain. So we have to have an eye on what Colombia is coming with, a (Juan Guillermo) Cuadrado, a (Carlos) Bacca, James Rodriguez. And then we've got to put the pieces together. So it's great to have players at your disposal that don't have any issues maybe playing a little bit more wide or playing inside. They give everything they have, and I think this really something—getting back now to the chemistry- very, very important that they really just fight for each other. Everybody behind the ball when we lose a ball and then work to win it back, and then we move forward again.”

Pulisic’s integration into U.S. side

The confidence seems to be at high level not just for the team’s established veterans but also for the newcomers. Christian Pulisc, 17, became the youngest player in the modern history of the U.S. national team to score when his second half goal on Saturday night sealed the 4-0 win over Bolivia.

The Borussia Dortmund prodigy says he has been welcomed into the team by the veterans and this has helped him adjust to the international stage. After two outstanding performances against Ecuador and Bolivia, he appears set for big minutes at Copa America Centenario—and could be a major figure as the Americans prepare for the 2018 World Cup in Russia.

"The guys have taken me in,” Pulisic said. “They're all really nice, and it's helped me a lot that I've been with them a few weeks now. It's getting more and more comfortable. I'm making more friends…..My dad taught me no matter what to just be myself. I knew that I was good enough, that I had the ability, so I never shy away from any moment, and I don't think anyone should."

The challenges of integrating a player as young—and as hyped—as Pulisic are substantial but Klinsmann noted that in addition to securing help from the older players on the team, Pulisic’s family is playing a role as well. Borussia Dortmund has seen the value in this and last year hired Christian’s father, Mark Pulisic, as an assistant coach at the youth level.

As for his role with Copa America, Klinsmann also indicated that going up against teams from the CONCACAF and CONMEBOL regions will be rough and physical. That style could be something new to the talented midfielder.

“He's grounded," Klinsmann said. "He knows that he has a long way to go, but he has no fear, and this is very important, not having fear, especially when you play then in our region when it becomes really physical. And what you're going to see next Friday will be very, very physical. So we obviously have an eye on him. We help. I'm not worried about his process, and we take it one day at a time.”

On Saturday against Bolivia, Hertha Berlin’s John Brooks partnered with Stoke City’s Geoff Cameron to provide the foundation of the American backline. The two have been paired together in central defense only twice but it seems like they will be the first-choice combo as the tournament gets underway.

Klinsmann expressed confidence in the duo but also indicated that Matt Besler and Steve Birnbaum could also see time.

“They are moving along great,” Klinsmann said of Brooks and Cameron. “The fact that they haven't played together that often is down to injuries. It's always down to some other issues, so now finally they're both fit. They're both healthy. So now I think that they fine tune, they develop a good partnership and hopefully that partnership is very valuable. On the other side, we're bringing along the Steve Birnbaums and the Matt Beslers—obviously he's a World Cup veteran—which is very, very important because the team that starts this Copa America probably won't be the team that finishes it.”

A New Look to the Strike Force

Just as the central defense pairing is new, many elements of the team’s attack will get a significant first test at Copa America Centenario.

Bobby Wood, 23, earned his first cap nearly three years ago against Bosnia & Herzegovina. Since then he has played in World Cup qualifiers and the CONCACAF Cup but has not played in a major tournament. With Jozy Altidore out injured and forwards Clint Dempsey and Chris Wondolowski both 33 years of age, Wood will be asked to provide youthful vigor and firepower.

Wood has been a bit of a project for Klinsmann, who began calling him up regularly at a time when he was in a dismal club situation at 1860 Munich. Wood has repaid Klinsmann’s faith in droves and has gone on to become a consistent scorer for both club and country.

“If you just see the learning curve of Bobby, I think it's very impressive,” Klinsmann said. “I remember a couple of comments from the media side two years ago when I brought him in for the first game in Czech Republic, and people were wondering why because he was sitting on the bench at 1860 Munich, fighting against relegation in the second Bundesliga. With a young player, they can only grow if they play. You've got to give young players the chance, the minutes, and also give them the OK that they can make mistakes.”

“So this is a great learning curve, and it obviously is fun for us to watch because we need fresh, young players breaking through, but we're not giving them that for free,” Klinsmann continued. “They have to work hard for it. Bobby has the will to work very hard, also to chase back, to help out defensively, which he did. So his job was basically to run at the back line. I texted him in the middle of the Real Madrid-Atletico game—Gyasi as well—and said please watch (Cristiano) Ronaldo and (Gareth) Bale, how they work the back line, coming from the outside, going inside, going to the other side.

"This is what they have to learn. They have to move people around, and then suddenly space opens up and things will happen.”

Regarding Zardes, Klinsmann acknowledged that things have not been perfect for the Los Angeles Galaxy attacker. This was apparent over the past few games as Zardes looked lost and ineffective against Ecuador but followed it up with two goals against Bolivia on Saturday night.

With players like Darlington Nagbe and Christian Pulisic playing well off the bench, there is intense competition to start. Zardes is aware that his spot could be up for grabs and does not take it for granted.

“It’s very competitive on this team because we have so many versatile players on this team that can play numerous positions,” Zardes said. “Not only that, everyone is technically gifted and everybody is very skillful and has an eye for the goal. It’s competition, day in and day out.”

As for what he brings the team, Klinsmann cites Zardes’ overall character and his willingness to learn. Despite his struggles, Klinsmann points out that he admires Zardes instincts in front of the goal and his work ethic to address his shortcomings.

“Gyasi is an amazing character. He's very, very hungry to learn,” Klinsmann explained. “Sometimes it's perfect and the next day maybe it's not so good, but it's totally fine because every player has his strengths and weaknesses. As long as they keep on working on their weaknesses and getting them better and better, then it's totally fine.

"He's very straight in his thought process. In front of the goal, he knows exactly what he wants to do, which is for a striker very important because you have to follow your first thought. That's crucial. If you start to have two thoughts, then you're going to get messed up. He was very, very kind of calm putting two goals in there, and in the whole game he was involved, so it's coming along."